A Changed View, A Changed Heart

The testimony of a Grand Canyon river guide

I’ve had the privilege of taking thousands of people through the Grand Canyon, through what I now believe to be one of God’s true, created wonders.

“Let’s go boatin’!” is the call that echoes off the walls of the Grand Canyon during my guided tours. It gets people moving and ready to head down river. In my years as a guide, I’ve had the privilege of taking thousands of people through the Grand Canyon, through what I now believe to be one of God’s true, created wonders.

My love for the Grand Canyon started in 1980 when I went on my first river trip. The following year, I started working as a part-time guide, and in 1983, I left my corporate life to work in the Canyon.

For the first 15 years of my career, I thought that evolution was responsible for forming the Canyon—millions of years of particle-by-particle deposition, interspersed by long periods of erosion. The profound significance of the Canyon was not yet engraved on my heart. I was being prepared, though, for a major shift in thinking. 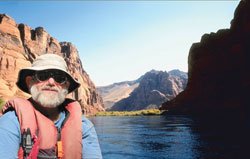 The author, Tom Vail, has guided over a hundred rafting trips down the Colorado River, deep inside the Grand Canyon, and has written Grand Canyon: A Different View.

One day in July 1994, a lady got off a plane at Marble Canyon, Arizona. She was going on a Grand Canyon rafting trip, and I was one of her guides. Little did I know how much she would be guiding me. My worldview was about to be turned upside-down.

If we had not been “trapped” in the Grand Canyon, we probably would not have given each other much of a second thought. God obviously had His hand in our meeting, however, even though at the time I didn’t think so. For one thing, this lady was way too “religious” for me. And as for me, let’s say I was not quite what she had in mind. I was not a Christian. I drank, a little too much at times. My language was, well, not always godly. And I was divorced.

But the Lord had scheduled enough time for us in this very magical place to get past those few “minor flaws” we both had. On the second night of our river trip, she started her ministry on my lost soul—not an easy project.

The way I saw the Canyon—this place that I love and that draws me back year after year—was changing in the most profound way.

Remember, I was immersed in evolutionary thought, which, contrary to what you might have been told by evolutionists, seeks to eliminate God from all reality. The logical extension of this—that we are not responsible to anyone, that there are no absolute truths in life, that we set our own rules and this life is all there is—was the backdrop for my lifestyle.

My life as a guide consisted of telling folks that the exquisite and varied rock layers in the Grand Canyon came about through completely natural processes, even though, deep in my heart, I had lots of questions about how these processes could have created what we see today. I knew about the biblical story of Noah’s Flood, but to me, it was just that … a story.

The Beginning of a New View

For Tom, a boating trip down the river in the Grand Canyon is more than a thrilling ride. The trip is a chance to see firsthand evidences of the global Flood. It is also a constant reminder that God’s Word is true and can be trusted.

After the trip with the lady who read her Bible and believed it, she sent me a Bible, which traveled halfway around the world with me on a trip to the Himalayas in Pakistan. My worldview began to be transformed slowly as I read the Word of God. My eyes kept falling on a prayer this lady had written in my Bible. I read this prayer tens of times before it really started to sink in. And at some point, I started to mean it. In October 1994, I returned from Pakistan a child of Christ. I had made a conscious decision to believe in the gospel, and to accept Christ as my Lord and Savior.

You likely have no idea how this choice impacted not only my heart, but my head as well. The uniformitarian view of life, the belief that what we see is the product of billions of years of gradual change, doesn’t jibe with the biblical account of origins. The way I saw the Canyon—this place that I love and that draws me back year after year—was changing in the most profound way as well. Some would say the change was just plain ridiculous.

For 15 years I taught the evolutionary model of how the Canyon was formed, but it never really made complete sense. There were too many totally unbelievable things that had to happen for this model to work. Genesis tells an altogether different story. When I studied the creation model, things started to come together. The creation model makes a lot more sense, is much easier to believe, and answers more questions than the million-of-years, molecule-to-man theories. I came to believe that it takes more “faith” to believe in evolution than in creation. 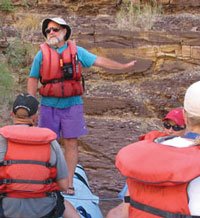 While in the Canyon, Tom is able to teach how the Canyon was truly formed—from a creation model based in Genesis. 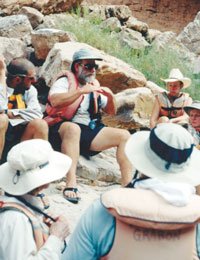 I hope you’ll come to believe, as I do, that the Grand Canyon is not only a chilling museum of death, with its trillions of fossilized creatures who were terrorized as walls of mud and water froze them in time. It is also a reminder to Christians that God’s Word is true and can be relied upon. And if the Flood happened, as Genesis clearly says it did, then the Judge of Genesis is also coming as the Redeemer so gloriously revealed in the last book of the Bible—the book of Revelation.

I know a little about geology and other fields of science which are so gripped by the evolutionary philosophies of today. I also know a little about men’s hearts. The Grand Canyon is a symbol of sin and what it once caused. That’s the fundamental truth that is found there. This profound truth humbles me, as I am always humbled when the water carries me forward on another trip through God’s gargantuan cathedral. And as you travel the Canyon you can see it, the Canyon, reaching out to the hearts of those passing through. It can truly be a life—and heart—changing experience.

Oh yes, “that lady.” Well, she was right—the true meaning of life is to have a personal relationship with the one true and living God. But she, on the other hand, was a little longer project than my seeing the truth. It took me about a year to get her to say, “Yes!” Her name is Paula, and we were married the following October, on the day the Lord had planned all along.

In 1997, Paula and I started Canyon Ministries, which is our way of sharing the majesty of the Grand Canyon from a biblical worldview. We encourage people to put on their biblical “Son glasses” and help equip them to uphold the authority of Scripture from the very first verse.

So, come join us and see His handiwork for yourself—and “Let’s go boatin’!”

Reprinted with permission from Tom Vail, author of Grand Canyon: A Different View.

Also see several articles about the controversy behind the book Grand Canyon: A Different View.

Previous Article The Key to the Age of the Earth Next Article Has Noah’s Ark Been Found?