The Necessity for Believing in Six Literal Days

It is vital to believe in six literal days for many reasons. The foremost reason is that allowing these days to be long periods of time undermines the foundations of the message of the Cross.

The majority of Christians in churches probably aren’t sure whether God really created everything in six literal days. Many believe it doesn’t matter whether it took six days or six million years. However, it is vital to believe in six literal days for many reasons. Foremost is that allowing these days to be long periods of time undermines the foundations of the message of the Cross.

Why do people doubt the days?

Fossils are the remains of dead creatures and plants buried by water.

The major reason why people doubt that the days of creation are 24-hour literal days usually has nothing to do with what the Bible says, but comes from outside influences. For example, many believe that because scientists have supposedly proved the earth to be billions of years old then the days of creation cannot be ordinary days.

What does “day” mean?

If we allow our children to doubt the days of creation, when the language speaks so plainly, they are likely to then doubt Christ’s Virgin Birth, and that He really rose from the dead.

Respected Hebrew dictionaries, like the Brown, Driver, Briggs lexicon, give a number of meanings for the word yom depending upon context. One of the passages they give for yom‘s meaning an ordinary day happens to be Genesis chapter 1. The reason is obvious. Every time the word yom is used with a number, or with the phrase “evening and morning’, anywhere in the Old Testament, it always means an ordinary day. In Genesis chapter 1, for each of the six days of creation, the Hebrew word yom is used with a number and the phrase, “evening and morning’. There is no doubt that the writer is being emphatic that these are ordinary days.

What if the days were millions of years?

The whole of the creation restored . . . to what?

The Bible says there will be a future restoration (Acts 3:21), with no death or suffering. How could all things be restored in the future to no more death and suffering unless the beginning was also free of death and suffering? The whole message of the gospel falls apart if you allow millions of years (with death and suffering) for the world’s creation.

The Bible is adamant though, that death, disease, and suffering came into the world as a result of sin. God instituted death and bloodshed because of sin so man could be redeemed. As soon as Christians allow for death, suffering, and disease before sin, then the whole foundations of the message of the Cross and the Atonement have been destroyed. The doctrine of original sin, then, is totally undermined.

If there were death, disease, and suffering before Adam rebelled—then what did sin do to the world? What does Paul mean in Romans 8 when he says the whole of creation groans in pain because of the Curse? How can all things be restored in the future to no more death and suffering, unless the beginning was also free of death and suffering? The whole message of the gospel falls apart if one allows millions of years for the creation of the world.

How should we approach scripture?

The Apostle Paul was grieved when he found the city of Athens steeped in idolatry (Acts 17:16). When he noticed the altar “to the unknown god’, he used the opportunity to tell the philosophers that their unknown god is God the Creator, Lord of heaven and earth.

One of the major problems we all have (in fact, it is the same problem Adam and Eve had) is that we tend to start from outside God’s Word and then go to what God has written in the Bible (or—in Adam’s case—what God said directly to him) to try to interpret it on the basis of our own ideas. This is really the major reason why most people question the days of creation.

We need to realize that the Bible is God’s Word. And as it is the inspired Word of the infinite Creator, God, then it must be self-authenticating and self-attesting. Thus, we should always start with what God’s Word says regardless of outside ideas. Only God’s Word is infallible.

If we allow our children to accept the possibility that we can doubt the days of creation when the language speaks so plainly, then we are teaching them a particular approach to all of Scripture. Why shouldn’t they then start to doubt that Christ’s Virgin Birth really means a virgin birth? Why shouldn’t they start to doubt that the Resurrection really means resurrection?

In fact, there are many theologians who doubt these very things, as they have come to disbelieve the plain words of Scripture written in the foundational Book of Genesis.

Why did God take six days?

Was there death, pain, and suffering before Adam and Eve’s sin? 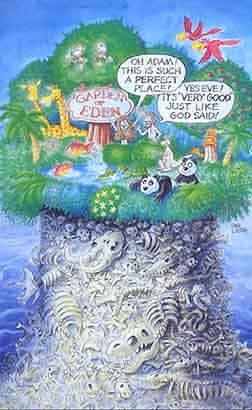 At the close of the Creation Week, God called everything He had made “very good.” This is powerful evidence against the idea that long ages of suffering and dying took place before the first man and woman, Adam and Eve, appeared.

If you think about it, an infinite Creator God could have created everything in no time. Why, then, did He take as long as six days? The answer is given in Exodus 20:11. Here we find that God tells us that He deliberately took six days and rested for one as a pattern for man—this is where the seven-day week comes from. The seven-day week has no basis for existing except from Scripture. If one believes that the days of creation are long periods of time, then the week becomes meaningless.

The Bible tells us that Adam was created on the sixth day. If he lived through day six and day seven, and then died when he was 930 years old, and if each of these days was a thousand or a million years, you have major problems! On the fourth day of creation (Genesis 1:14-19), we are given the comparison of day to night, and days to years. If the word “day” doesn’t mean an ordinary day, then the comparison of day to night and day to years becomes meaningless.