Adolf Hitler said, “He alone, who owns the youth, gains the Future!”1

While in elementary school I don’t recall hearing about evolution. In fact, in those days (it seems like millions of years ago!), teachers in Australian public schools actually read the Bible to their students!

Then, when I attended high school, a new “breed” of science textbooks came out. They were based on books developed in America, and they presented evolution (molecules to ape-like creatures to man over millions of years) as supposed scientific fact.

How many of you have heard of evolution and that we supposedly evolved from ape-like creatures?

When I speak at programs for grades K–6 at our church conferences, I ask, “How many of you have heard of evolution and that we supposedly evolved from ape-like creatures?” Nearly every hand in the room goes up. That’s true all around the world!

The Devil is out to get this generation. There’s no doubt we’re seeing a huge effort to indoctrinate children from a very young age in the religion of evolutionary naturalism (atheism).

This campaign by the secularists is one of the reasons we have produced books, DVDs, curricula, web articles, exhibits at the Creation Museum and Ark Encounter, and so on for kids, as well as teens and adults. I couldn’t help but be reminded of how important our resources are when our librarian brought me some of the recent evolutionist books being promoted for children.

Here is a page that shows the cover and selected pages from just one of these pro-evolution books, Grandmother Fish: a Child’s First Book of Evolution. You can see for yourself what evolutionists are using to attempt to brainwash kids against God’s Word. 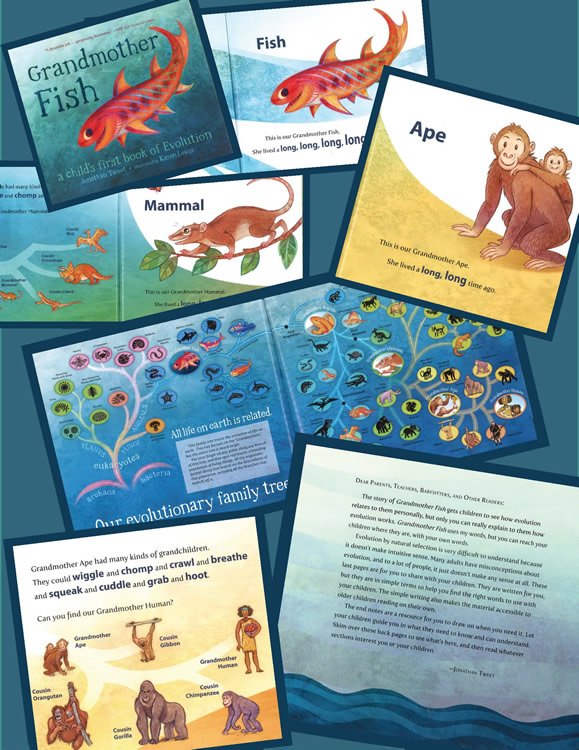 The author, Jonathan Tweet, actually sent me a copy of his book. His letter to me stated:

You might be curious about the contents of my book, and you probably don’t want to buy a copy, so here’s my gift to you. Plenty of Christians think Grandmother Fish is great, but I guess they’re not your kind of Christian. Anyway, kids seem to love this book. I hope you like the pictures.

His comment represents one of the greatest problems in the church today. So many Christian leaders and parents have compromised God’s Word with evolutionary ideas, and have taught their children to think this way. Our careful research (conducted nationwide and documented in our books Already Gone and Ready to Return) clearly shows that this compromise is a major reason our teens leave the church by college age (with few returning).

How different Grandmother Fish is from the numerous children’s books we’ve produced at AiG. Our books help children know they can trust God’s Word beginning in Genesis, and give them answers to the false belief of evolution. But that approach is only one part of it!

You see, there’s no point in teaching kids to believe Genesis and reject evolution if we are not leading them to the Savior, Jesus Christ. So with the opening of the Ark Encounter last year, I wanted to make sure we had a special children’s book to present the gospel in a unique way.

My new book for children is titled A Special Door. 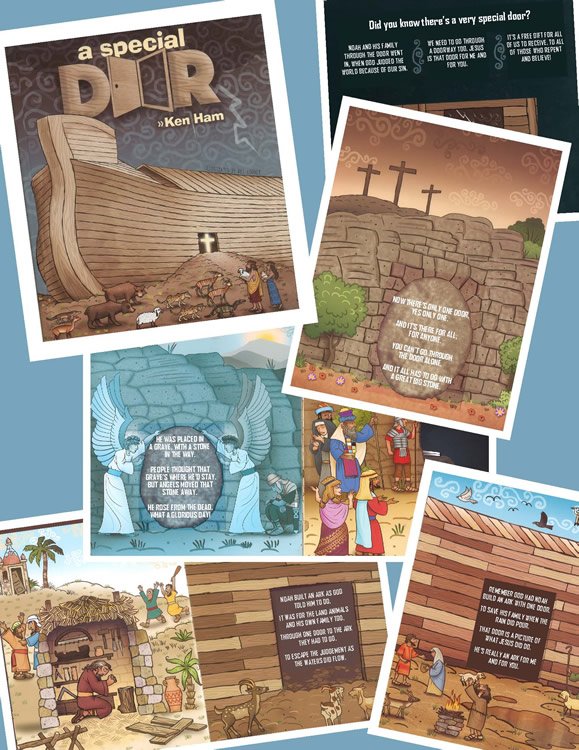 When you compare the books, it really sums up the spiritual battle that is before us—a battle that began in Genesis 3.

The good news is that increasing numbers of churches, homes, and schools are using AiG resources. And they are bringing kids, family members, and friends to the Ark and Creation Museum. Our burden has always been to develop more resources, exhibits, and other tools to reach more and more kids, teens, and adults with the truth of God’s Word and the gospel.

As we begin this new year, I urge you to pray for Answers in Genesis. Your support will help this apologetics ministry continue to combat the Devil’s strategy to drag generations away from the “door”—the Lord Jesus Christ.

Let’s all do our best to reach this needy generation with the most important truth of all—the message of salvation! Thank you for your partnership with us!