Genesis of a Legacy

We all knew “the call” was coming and prepared ourselves as best we could. Dad had been sick off and on for some time, and this time we knew that he would not be getting better. I was in a hotel room in Indianapolis when the call came from my brother Robert.

Dad and I had talked many times about what I should do if he were to die while I was conducting a seminar. Dad had told me, “Kenneth, if I die there’s really no point in coming back, because I won’t be here. It will be more important to preach God’s Word so others can join me in Heaven.” 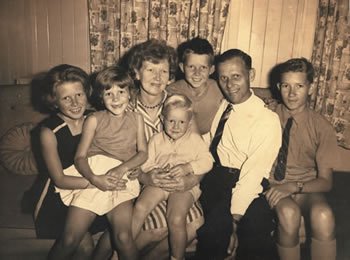 Ham family photo, taken during the mid-1960s at their home in Australia. From left to right: Rosemary, Beverly, Mum, David, Robert, Dad and Ken. (Stephen not yet born.)

So I decided to stay and speak—to honor what my father would want. By God’s grace, I was able to complete the seminars over the next several days.

Our family then flew to Australia. During a special memorial service, my five siblings and I shared memories of Dad. We all used different words but conveyed the same basic theme: he always stood up for what he believed, he taught his children to love the Word of God, and he always insisted God’s Word be authority over the fallible words of man.

At the end of the service, a dear friend of the family came up and said, “After a service like that, I’m challenged to go home and ask my children what they’re going to say about me when I’m dead!” His remark sparked my brother Steve’s and my vision for our new book, Genesis of a Legacy, in which we address the question that all parents should ask: What kind of legacy will you leave behind to future generations? 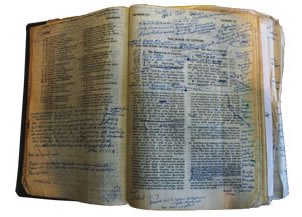 The Bible was the axiom of Dad’s life, the central point of truth around which everything revolved.

My father’s legacy began with his birth on October 22, 1928, on a little-known island near the northern tip of Australia. When he was 16, his father died, so he turned to his heavenly Father for direction, stability and leadership. In the words of the Bible he found all he needed.

He chose to become an educator, as his father had been, investing his career in the next generation as a teacher, administrator and principal. With his new bride and his Bible, he set out to make an eternal difference. As his passion for truth and the lost grew, he became a powerful and articulate defender of his faith and the Word he so desperately loved. 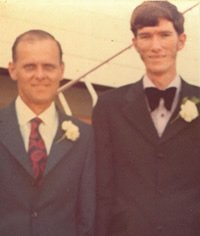 Ken with his dad in 1972, photographed at Ken and Mally’s wedding.

Through his words and life, my father seized every day to influence his world for truth and to encourage his children to love God and His Word. He imparted lessons that will be forever etched in our hearts and minds.

Lessons from Our Father

“Whatever you do, do it 100%.” Dad never did anything half-heartedly. He had chosen to serve the world as an educator, but he approached the task with an intensity that reflected the truth in Colossians 3:23–24: “Whatever you do, do your work heartily, as if for God rather than for men, knowing that from the Lord you will receive the reward of the inheritance. It is the Lord Christ whom you serve.”

“What you do at the top filters down.” Leaders have great responsibility because they influence their followers. In Luke 6:40 Jesus said, “A pupil is not above his teacher, but everyone, after he has been fully trained, will be like his teacher.” 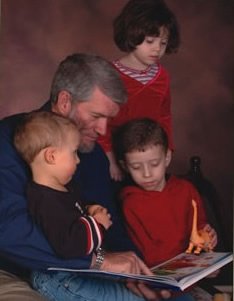 Ken enjoys reading to his grandchildren, from upper right to left: Kathryn, Malachi and Noah.

By example, Dad illustrated this truth, both in school and at home. While other principals hit the pub after work and wondered why their teachers were sluggish in the morning, Dad upheld his moral integrity … and his faculty followed. His schools were simply the best in the territory.

“Invest where it counts.” Our house was a well-known stopping-off point for missionaries. Generous with their finances, possessions and time, our parents exhibited joy in helping others. They understood and practiced Matthew 6:19–21: “Do not store up for yourselves treasures on earth, where moth and rust destroy, and thieves break in and steal; but store up for yourselves treasures in heaven, where neither moth nor rust destroys and thieves do not break in and steal. For where your treasure is, there will your heart be also.”

“Take action and take risk.” If they were burdened that something should happen, they made it happen, and they rarely counted the costs.

We saw, time and again, the provision of God. When I look at the history of Answers in Genesis, I am amazed. The people, the vision, the provision of God every step … it’s miraculous. I doubt I would have ever learned to take risks (which are really just prayerful, thoughtful steps of faith) without my parents’ model.

“Defend the faith wherever you are.” Australia is about the same size as the continental USA; however, the population is only about 19 million.1 It is a land of rich natural resources; yet spiritually, it is a barren desert. The number of bornagain Christians is only about 2%. Only 5–7% attend church.2 In this land of great spiritual need, our parents instilled in us the conviction to be missionaries and defenders of the faith, no matter where we happen to be.

“When I came home for my father’s memorial service, it turned out that he had left one last earthly gift for me.” 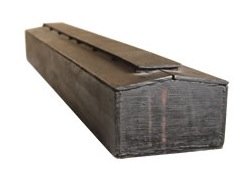 In the months before Dad died, he constructed a model of Noah’s Ark. True to the dimensions in Scripture, he built the small craft to scale and weighted it properly so that it could withstand waves without turning over. My father wasn’t a carpenter, but he put his heart and soul into making this model something special. When I arrived home, Dad’s little ark was there, floating in the pool, flying miniature flags from both Australia and the USA.

The ark my father built for me rests with pride on the bookshelf in my office at Answers in Genesis. Each time I look at it I am reminded of the inheritance my parents gave me—an inheritance that is far more valuable than silver or gold. They left an everlasting spiritual inheritance—a love for the Creator and Savior, and His infallible Word.

Daily, Dad would study so he could defend the Christian faith. He was adamant that if you can’t believe Genesis, then you can’t trust the rest of the Bible. After all, every biblical doctrine is founded in the history of Genesis 1–11. My father understood that if Adam wasn’t created from dust and didn’t fall into sin, as Genesis states, then the gospel message of the New Testament couldn’t be true.

The way we train our children will affect the way they train their children, generation after generation.

Dad started with the belief that God’s Word is our sole authority in all matters of life and in every area it touches upon (geology, astronomy, anthropology, childraising, etc.). God used my father’s biblical foundation like armor to deflect humanistic, evolutionary thinking. The Bible was the axiom of Dad’s life, the central point of truth around which everything revolved.

Mum’s presence was also a definitive factor in our father’s legacy. My mother loved and supported him, and she endlessly cared for her children. Since Dad’s passing, she has had her share of health issues, including cancer; and I have witnessed my brothers and sisters rally to assist her—gratitude for the biblical heritage she also strove to supply.

You may need to sustain a godly heritage left by your ancestors, or you may need to recreate a legacy that has been lost. Either way, it is a great challenge—a vitally important one. The way we train our children will affect the way they train their children, generation after generation.

From the genesis of his legacy on Thursday Island in 1928 to the revelation of his legacy at this memorial service in 1995, God used this simple and devoted man to reach his family … and then the world for his Creator. May all praise go not to my father, but to the Father he served … for that is the way both would want it.

Previous Article Bird Flu Next Article To Be a Pilgrim