Some Christians call Hebrews chapter 11 the “Believers Hall of Fame.” There, God recorded for us the names of some great (but not infallible, I might add) “heroes of the faith.”

Some Christians call Hebrews chapter 11 the “Believers Hall of Fame.” There, God recorded for us the names of some great (but not infallible, I might add) “heroes of the faith.”

I have often thought about one of them, Noah (even more so recently with our huge Ark Encounter project). The only people to board the Ark he built were his family and Noah himself. Now, have you ever thought about the fact that nowhere in Scripture does it indicate Noah knew how long he would stay on the Ark? Noah had faith God would see him through. 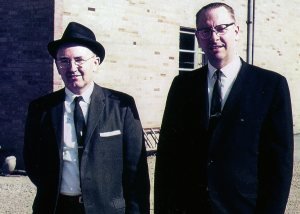 Dr. Henry Morris and Dr. John Whitcomb are “heroes of the faith.” They started the modern creationist movement when they wrote The Genesis Flood fifty years ago.

In more recent times, I think of other heroes of the faith like Martin Luther. About 500 years ago, he was willing to stand on the authority of God’s Word in spite of the powers that be—and regardless of the consequences. His actions helped launch something that we today know as the Reformation.

I also think of my parents as heroes. They trained me to stand uncompromisingly and boldly on the authority of God’s Word. Also, I consider men like Dr. Henry Morris and Dr. John Whitcomb; they started the modern creationist movement with the writing of the book The Genesis Flood fifty years ago. In addition, I think of Dr. Duane Gish of ICR, now 90 years old, who will always be known as the world’s greatest creation/evolution debater. 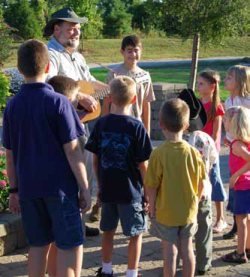 As a singer, dinosaur sculptor, author, teacher, and children’s workshop leader, Buddy Davis has become a “hero” for young and old.

Over the years, parents have brought up their children to learn from various AiG speakers and writers. Many of them have said Buddy Davis (also a talented musician and builder of some of the incredible dinosaurs in our Creation Museum) is their hero. Kids just love Buddy. I have seen many children run up to Buddy at seminars or at the museum to give him a hug or get his autograph.

Sometimes that “hero status” is given our other AiG speakers. Frankly, it was awkward to hear that at first. After all, we are just fallible humans. But then one mother told me: “I would rather my children look at AiG speakers as heroes than a pagan movie star, or some other famous non-Christian as their hero.”

We soon realized a few things:

Buddy Davis, a hero to so many children, has just released a new action DVD, I Dig Dinosaurs, for young people and adults. Perhaps God will use it to make Buddy a Christian hero for many more kids!

As I watched the completed video recently, I remembered the first time I met Buddy. He and his wife Kay attended one of AiG’s first conferences. There in Mt. Vernon, Ohio in 1994, Buddy dropped off some of his dinosaur sculptures so they could be on display at our teaching conference.

After the conference, Buddy asked if I would go to his house nearby and see his other dinosaur models. When I saw them, I declared something like: “These dinosaurs will help give people a better understanding of what we want to put inside the future Creation Museum.”

At that time, Buddy and his wife Kay shared with me that they, too, had a burden that their dinosaurs be used in a creation museum. That evening, I found out Buddy could also sing, and I asked him to perform a song. I was moved as he sang, and decided right there that Buddy would perform that same song at the opening of the Creation Museum (which occurred thirteen years later!).

Today, as a singer, dinosaur sculptor, author, teacher, and children’s workshop leader, Buddy Davis has become an “icon” of the AiG ministry and Creation Museum.

And yes. I admit it! Buddy is one of my heroes, too!

The Lord brought Buddy and Kay into our lives to be a key part in enabling the Creation Museum to become a reality and have used their talents in other ways to proclaim biblical truths. Praise God!

The [creation] conference we held went very well. Before the evening session, we showed the Already Gone DVD [by Ken Ham] and had many people tell me how eye-opening it was.

The more I engage in teaching creation apologetics, the more need I see for it with students everywhere.

Previous Article Technology for Good and Evil Next Article Body of Evidence!