Our body is truly a “body of evidence” for the all-knowing and all-powerful Creator. It inspires us to give credit to our Creator and Savior, and reminds us of our accountability to Him. 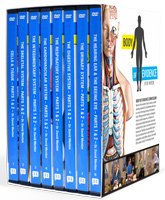 The Body of Evidence boxed set.

[Editor’s note: David Menton, PhD, brings 34 years’ experience in teaching both microscopic anatomy and gross (i.e., macroscopic) anatomy to medical and graduate students at one of America’s premier medical schools. He is now a researcher and speaker for AiG and its Creation Museum.]

Our body is truly a “body of evidence” for the all-knowing and all-powerful Creator. It inspires us to give credit to our Creator and Savior, and reminds us of our accountability to Him. I think of the verse, “Know that the Lord, He is God; It is He who has made us, and not we ourselves; We are His people and the sheep of His pasture” (Psalm 100:3).

While there is much that can be learned from gross/macroscopic anatomy (i.e., what can be seen with the unaided eye), experience has taught me that structure and function come together best at the microscopic level. For example, relatively little can be learned about the structure and function of the kidney at the gross anatomical level, but at the microscopic level, it begins to reveal its secrets. And it makes God’s incredible design even more amazing. I present that message in a new 16-part DVD series, Body of Evidence.

Now, I recognize that most people will not have the opportunity to study a real human body. Yet we all can still be able to study anatomy from a bigger-picture perspective, as we do with a new exhibit inside the Creation Museum that I helped design (see photo at left and article on p. 6). It deals with the science of homology—the study of structural similarity of two parts of a creature. 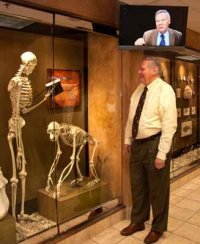 With this and other displays inside the Creation Museum, we examine what evolutionists say about how humans supposedly evolved from ape-like creatures. Of course, the Bible tells us that on the same day He made all the land animals (the sixth day), He also created man—in His own image—with the intent that humans would have dominion over every other living thing on earth (Genesis 1:26–28). There is no animal that is man’s equal, and certainly none his ancestor.

In addition, the Apostle Paul stated clearly that man is not an animal. “All flesh is not the same flesh, but there is one kind of flesh of men, another flesh of animals, another of fish, and another of birds.” (1 Cor. 15:39). The Bible leaves absolutely no room for pre-humans.

Evolutionists see anatomical features that look “intermediate” between apes and man, and thus see them as “proof” of evolution (a claim from homology that we “dissect” in our new museum exhibit). Though similarities may be cited, the only historical evidence that could support the idea of ape ancestry of man is based on fossil interpretation. Let’s briefly look at the fossil record.

Skulls are perhaps the most interesting fossils of apes because they house the brain and offer an opportunity, with the help of imaginative artists, to look our presumed ancestors in the face. The human skull is easily distinguished from all living apes, though there are, of course, similarities.

Perhaps the best way to distinguish an ape skull from a human skull is to examine it from a side view. From this perspective, the face of the human is nearly vertical, while that of the ape slopes forward from its upper face to its chin.

Another distinctive feature of the human skull is the nose bones our glasses rest on. Apes do not have protruding nasal bones and would have great difficulty wearing glasses.

I conduct a workshop at the Creation Museum on the topic “Three Ways to make an ‘Ape-man,’” which are as follows:

These three approaches actually account for all of the attempts by evolutionists to fill the unbridgeable gap between apes and men with fossil “ape-men.”

Many “ape-men” are merely apes that evolutionists have attempted to upscale to fill the gap between apes and men. These include all the australopithecines. All have obviously ape skulls, ape pelvises, and ape hands/feet.

In an effort to fill the gap between apes and men, certain fossil men such as Neanderthal man have been declared to be “apelike” and thus ancestral to “modern” man.

As a scientist and Bible-believing Christian, I confidently declare that both science and Scripture show we are not descended from an apelike creature. God fashioned man as the crown of His creation on Day 6. We are a special creation of God, made in His image, to bring Him glory. That’s a message our “evolutionized” culture needs to hear.

Previous Article Kids Love Heroes! Next Article Beam Me Up!