No Room for the Creator?

With the U.S. presidential election now over, the world is closely watching Barack Obama’s new agenda for “change.” One subject not likely to receive much media attention, however, is the Creator’s place in policy debates. Like so many other world leaders in politics and the media, the new president believes that science and education hold the key to a better life. Views about God may be important for individuals, but keep Him out of the science classroom and politics. 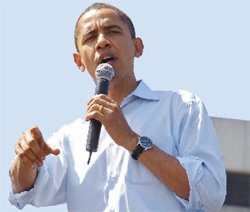 “I think it’s a mistake to try to cloud the teaching of science with theories that frankly don’t hold up to scientific inquiry.”
—Barak Obama, on teaching intelligent design in government schools

Obama told an interviewer, when asked during the election campaign about teaching intelligent design:

“I’m a Christian, and I believe in parents being able to provide children with religious instruction without interference from the state. But I also believe our schools are there to teach worldly knowledge and science. I believe in evolution, and I believe there’s a difference between science and faith. That doesn’t make faith any less important than science. It just means they’re two different things. And I think it’s a mistake to try to cloud the teaching of science with theories that frankly don’t hold up to scientific inquiry.”1

The newly elected vice president, Joe Biden, is even more open about his views. Asked about intelligent design, he said, “I refuse to believe the majority of people believe this malarkey!”2

During the campaign, only one candidate’s views on origins came under scrutiny. Hours after Alaska’s governor, Sarah Palin, was announced as the Republican vice presidential candidate, the media blasted her for once suggesting that creationism be taught alongside evolution.3

The media and politicians may attempt to sideline the Creator by simply ignoring Him or scorning Bible-believers. But the Creator still sits on His throne and weighs every nation in the balances.