National Trust caves in to pressure at the Causeway.

The opening of the Giant’s Causeway Visitor Centre in Northern Ireland earlier this year touched off a protest. At issue was a bit of audio material that acknowledged the existence of the young earth creationist scientific explanation of the Causeway’s origin. The exhibit’s designers considered the debate over the Causeway’s origin to be a part of its history. They included this audio in the history section, not the science section. Everything else in the exhibit says the Causeway is 60 million years old. In response to the ongoing storm of protest, the National Trust has now decided to change the audio track. 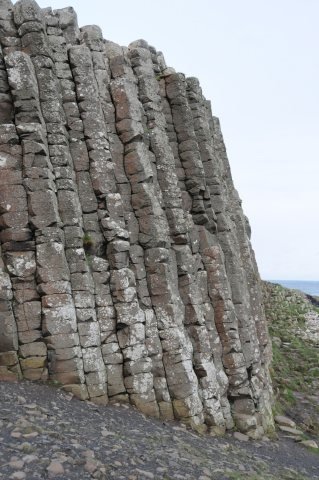 Tall hexagonal basaltic columns at Giant’s Causeway, a testament to the catastrophic events during the global Flood about 4,500 years ago. Read about it at “Giant’s Causeway of Northern Ireland.” Image from Answers in Genesis speaker Dr. Tommy Mitchell.

Young earth creationists believe that the earth was created some 6000 years ago. This is based on a specific interpretation of the Bible and, in particular, the account of creation in the book of Genesis. Some people around the world, and specifically here in Northern Ireland, share this perspective.

The replacement, about 20 seconds long, says that there is a “clear understanding among scientists that the heat of the earth was the driving force behind the formation of the Giant's Causeway.” It states that the earth is “far older than had previously been thought.” It concludes,

All the scientific evidence points to a volcanic origin for the columns of the Giant's Causeway, around 60 million years ago. However, not everyone agrees with the scientific view. There are some people who believe—often for religious reasons—that the earth was formed more recently: thousands of years ago rather than billions.

Of course, the signage at Giant’s Causeway proclaims only the mainstream millions-of-years scenario. The millions-of-years contention comes from a worldview-based belief that denies the record of the global Flood as recorded in biblical history. At the heart of the mainstream belief is the uniformitarian assumption that slow gradual geologic processes over millions of years have produced all that we see today. Radiometric dating methods interpreted on the basis of unverifiable assumptions about the untestable past support this view.

Nevertheless, the Flood model of geology—which has not been depicted at the Visitor Centre despite angry rumors to the contrary—explains the formation of the monumental basalt columns.

Nevertheless, the Flood model of geology—which has not been depicted at the Visitor Centre despite angry rumors to the contrary—explains the formation of the monumental basalt columns. Catastrophic tectonic activity (“the fountains of the great deep were broken up” according to Genesis 7:11) associated with the global Flood provides the framework for explaining the evidence of intermittent volcanic activity seen in the basalt columns. Surges of sediment-laden water that would have cooled the hardening lava and caused it to shrink and crack into characteristic hexagonal shapes complete the picture. These 40,000 hexagonal basalt columns were thus formed as a series of lava flows cooled and cracked in water that also deposited sediment between the layers of hardening lava. 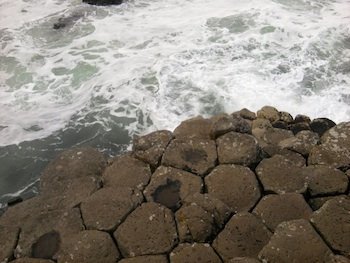 The Flood model and “mainstream science” each offer an explanation for the unusual formations at Giant’s Causeway. Both represent an effort to explain the unobservable untestable past. Both involve worldview-based interpretations, but only the creation scientists’ point of view has an eyewitness account—God’s as given in the Bible—available to guide our interpretation of what we see.

The ongoing debate about the Causeway really is a part of its history, but now the scientific character of that debate is expunged, the debate being depicted as a conflict between religion and the scientific high road. And now the Causeway’s history includes the official creation of a fiction: the fiction that science has settled the question of its age, the fiction that all the scientific evidence points back 60 million years, the fiction that the one and only scientific view is the millions-and-billions view—all other views being unscientific. On the contrary, only the interpretation of those scientists who deny the historicity of the global Flood and the evidence of its catastrophic effects on earth’s geology points to that interpretation. Perhaps new signage for the history section should now read “Revised History” or better yet, “Revisionist History.”

Previous Article De-Regulation of an Existing Trait Next Article News to Note, October 6, 2012