Hidden away in the stunning imagery and the evolutionary, pantheistic message of Avatar is the reminder of one special tree—and humanity’s need for God.

In just five weeks, Avatar has already become one of the most popular films of all time; it has recently captured a Golden Globe award for best movie. Because the three of us are science fiction fans who are also continually on the lookout for how the Bible’s teachings can be compared to what’s in the popular culture, we decided to see it (and in 3D). 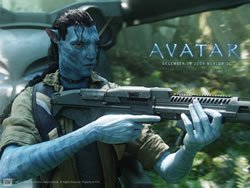 Avatar’s special effects are startling. I remember when I saw Jurassic Park 17 years ago—I was amazed, even stunned, by the lifelike dinosaurs on the screen. Before seeing Avatar, I wondered how someone could ever improve on such realism. But with a $300 million budget, director James Cameron made it possible. He took movie realism to a whole new level in filmmaking. We saw a world of exotic six-limbed animals, glowing plants, and floating mountains—all computer generated—that looked completely real. We were frankly in awe of the technology that could produce a film like this.

But, like any technology that stems from man’s (God-given) intellect, it can be used to promote either biblical beliefs or unbiblical ideas. For all its impressive special effects, this movie promotes some wrong messages and a generally unbiblical worldview. (The movie is rated PG-13 and contains some inappropriate language, some sexual content, and battle-related violence.)

Avatar tells a story of researchers employed by a large, greedy corporation who are escorted by mercenary soldiers to a world called Pandora.1 To obtain a valuable mineral, the group enters an idyllic, forest-filled land—inhabited by tall blue-skinned humanoids called the Na’vi—to take what is not theirs. Pandora’s innocence and paradise are about to be lost, reminiscent of the Garden of Eden of the Old Testament. An allusion to the New Testament, specifically Christ’s appearance on Earth, occurs when an outsider helps rescue the Na’vi as he takes on their form. (More about other biblical inferences later in this review.)

In some ways, parts of the plot resemble the Oscar award-winning movie Dances with Wolves, in which Native-Americans are exploited by the military in the 1800s. Director Cameron acknowledges Dances with Wolves with dialogue such as: “What am I supposed to do—dance with it?” (as the protagonists are challenged by an alien animal). The pantheistic religion and clothing of the Na’vi also give hints to the American Indian.

The movie also presents a “spiritual” experience in its pantheism and hyper-environmentalism—and the worldview of evolution. When I first viewed the original Star Trek TV series and its follow-up movies, I would often notice evolutionary statements—and the overall evolutionary basis of the entire franchise.

When the next TV series, Star Trek: The Next Generation, appeared, I noticed not only its evolutionary basis, but also a cultural agenda in regard to homosexual behavior, feminism, abortion, and so on. There is no doubt the series’ TV writers were attempting to influence people’s thinking concerning social issues.

In both TV series, however, there was usually a mention of gods or some spiritual experience that various people were experiencing. After all, man’s innate knowledge of God or the spiritual realm is written on his heart and cannot be hidden, although it can get corrupted.

Over the years with movies I’ve seen, there’s been a noticeable shift away from a strong materialist, evolutionary emphasis to a more “spiritual” (yet issues-driven) one; often evolution and the spiritual intertwine. I believe this shift reflects American society as a whole. Mechanistic, materialistic evolution does not fill the void in the hearts of people, who are created in the image of God—and created with the knowledge of God (and the knowledge of right and wrong) written on their hearts.

In the past few years, we have seen more of an interest among people in things spiritual. However, because the “heart of man is deceitful above all things and desperately wicked” (Jeremiah 17:9), humans will suppress the truth of the true God that is crying out within them (Romans 1) and go after gods of their own making (Genesis 3—“You can become as gods”). At the same time, they also want to justify their own immoral/rebellious behavior.

The general shift in recent moviemaking reflects this great need of humans—a need for a relationship with the Creator. But the emphasis is to go after other gods—to look for all sorts of avenues that will give them some sort of “spiritual” experience, rather than accept the truth that God has revealed to us in the Bible.

Avatar is fictional, of course. But such movies (like Jurassic Park as well) are based on concepts that writers and producers believe in and reflect their agendas to affect the moviegoers’ thinking—including on spiritual matters and moral issues. For instance, in Avatar, I believe that the comments about the Na’vi humanoids being “blue monkeys” and “savages” (even though they can speak their own language plus English, make tools, etc.) are evolutionary references.

Also, there are references that appear to promote extreme environmentalism. As such, the worldview promoted in Avatar is pantheism—a worship of the creation (which the apostle Paul warns us against in Romans 1). The Na’vi humanoids worship “mother” (nature); their god lives in the plants and animals, especially the trees.

It is interesting to note that the trees depicted in the film, and particularly one tree called the “Tree of Souls” (something of a holy spot), are considered to be a link to their “mother.” Towards the end of the film, the hero prays to the Na’vi god through this tree and declares that humans had not been good stewards of their planet Earth, stating, “There’s no green there.” The hyper-environmental message continues: “They killed their mother, and they’re going to do the same here!”

The Knowledge of God

Another aspect observed in so many modern movies today, as we alluded to at the beginning of this review, is how they manage to mix in themes from the Bible. Even secularists can’t get away from the knowledge of God within them.

In Avatar, the god of the Na’vi selects a “savior”—the protagonist Jake Sully. Like Christ, he is “incarnated” (Sully is a bioengineered mixture of human DNA and Na’vi DNA) to be one of the Na’vi. He becomes their hero, leading them to a type of “salvation”—and then experiences something of a “death” and “resurrection,” by the power of the Na’vi god to whom he had prayed. The movie even contains a reference to being born a second time; unlike Christianity, however, this second birth is works-based rather than by grace and faith (Ephesians 2:8–9).

As the movie concluded, a different tree came to my mind. I thought of Genesis 1 when God made the trees on day three of the Creation Week. The Creator knew that because the man (Adam) He would soon create on Day Six eventually would rebel (sin) against Him, God would have to provide a way of salvation. Four thousand years after the first trees were made, a descendant of one of the original trees God created would be cut down and used as the tree upon which our Creator, Jesus Christ—in human form (the God-man), would die and pay the penalty for our sin. God’s wrath against sin was poured out on His Son as Jesus was on the wooden Cross. But three days later, there was a real resurrection, when Jesus, a real human (man, but still God incarnate), rose from the dead, thus conquering death.

The One who can do such a thing has ultimate power. Because of what was done on this tree, God Himself paid the penalty for our sin; so, the relationship with our Creator could be restored—and we will live with Him for eternity. As Romans 10:9 declares: “If you confess with your mouth the Lord Jesus and believe in your heart that God has raised Him from the dead, you will be saved.”

Avatar can be described overall as a film about a fictional special tree and the “mother” god of pantheism, presented with an overtone of environmentalism. As sinful humans cry out for purpose and meaning in life, reflecting what God has already written on their hearts (and in His revealed Word), we need to tell the world about a real special tree, and also teach them about our real Father God who created and loved us, and who sent His Son to step into history to save us—paying the penalty for our sins.