Persuaded by the Evidence

Dr. Jerry Bergman discusses why some have rejected Darwinism and embraced the biblical account of creation. 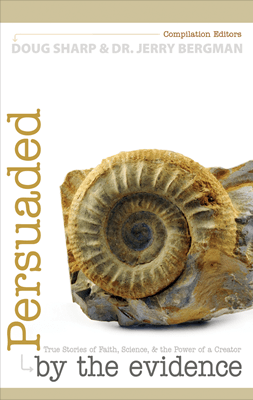 Persuaded by the Evidence is a unique collection of true stories from Christians—each sharing a personal journey to find the biblical truth of a six-day creation.

It is commonly claimed that the major reason why most people reject Darwinism and accept creationism is due to religious motivations. Although this is often true, in a large number of cases, an understanding of the scientific evidence was the major factor that convinced many to reject evolutionism. Some of these persons who rejected Darwinism then, realizing that Darwinism does not explain the origin of life, become creationists.

The creation view concludes that intelligence is responsible for life; the other view, evolution, concludes that DNA copying mistakes called mutations create genetic variety that is “selected” by natural selection—Darwin’s famous survival of the fittest theory. In other words, Darwinism teaches that genetic mistakes, mostly a result of the accumulation of copying errors that occur when DNA replicates, is our creator.

Creationists realize that evolution, defined as progression from molecules to humans by way of animals (from the “goo to you by way of the zoo” theory), is a failed theory. It has failed because it has been shown by scientific investigation to be not just unverified, but scientifically false. Evolution did not occur, and could not have occurred, and this conclusion is based on scientific observations, not religion.

Other persons who were creationists as children faced challenges to their beliefs from the media, school, and social interactions, but after examining the scientific evidence became convinced to remain creationists. They realized that Darwin’s theory explains the survival of the fittest, but does not explain the arrival of the fittest. They further realize that, after a century and a half of effort and spending billions of dollars to prove their theory, evolutionists are farther away from explaining scientifically the origin of life than ever before in history. Darwin had no idea of the enormous specified complexity of the cell, by far the most well-designed complex machine in the universe.

Stories of several score of these truth seekers who, after much study, concluded only intelligence can explain the existence of life and the entire universe, are included in our new book titled Persuaded by the Evidence. This collection of writings document how important the evidence from scientific observations are in accepting the truth of creation. In this work these seekers went beyond rejecting Darwinism and continued their search, concluding that this intelligence is God, specifically the God of the Bible, and then committed their lives to serve the Son of God, Jesus Christ.