Is Rapid Lizard Adaptation a Template for Deep-Time Evolution?

An island competition between two species of anole lizards—in just 20 generations and a mere 15 years—has, evolutionary scientists report, provoked one of them to evolve wider stickier toe pads, the better to grip high branches. Having observed this rapid phenotypic change, the researchers conclude that “real-time studies of evolution can be used to test classic evolutionary hypothesis directly” despite the barrier of deep time.

They write that, because natural selection can produce such rapid changes, “evolutionary hypotheses about phenomena once thought to transpire on time scales too long for direct observation can be tested in real time while using replicated statistical designs.”1 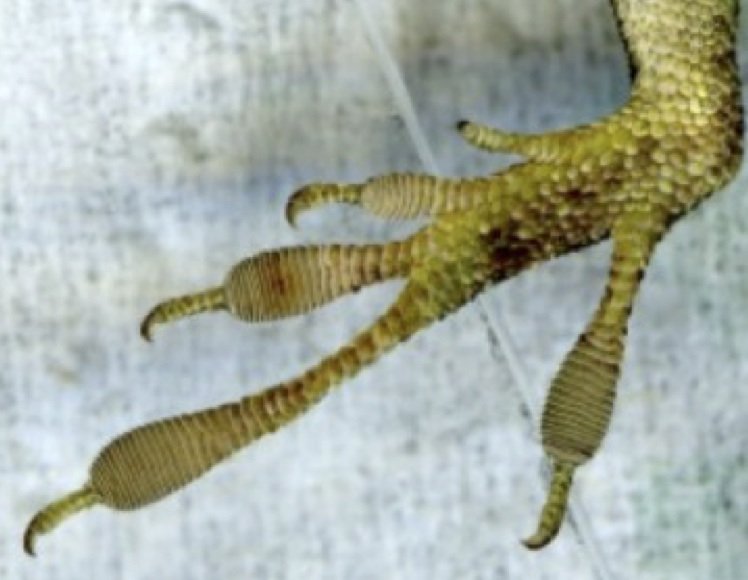 This is the left hind foot of a green anole from a population that had been competing with brown anoles for fifteen years by shifting their habitat to one high in the trees. The toe pad on the longest toe is statistically a little longer and little better supplied with sticky scales than the toes on green anoles unchallenged by competitors. Natural selection is likely a factor in causing this variation to rapidly become more prominent within the green anole species. Image: Yoel Stuart; University of Texas at Austin, through Science Daily

The competition was arranged on Florida islands inhabited by the Carolina green anole lizard Anolis carolinensis. The green anole ordinarily occupies a habitat from the ground to the treetops. The brown anole lizard Anolis sagrei is native to Cuba and the Bahamas. The brown lizards consume the same diet as the green and thus were expected to be apt competitors. Also, the brown and green species have never been known to cross-breed or hybridize and are known to even eat each other’s young. Mimicking its invasion of Florida, the southeastern United States, and even Hawaii, the brown anole was intentionally introduced into three of the islands. Soon, as the brown anole population grew, the green anoles shifted their habitat upward, giving ground to the brown anoles below.

The researchers confirmed in a preliminary phase of the study that the green anole habitat shifted to higher branches after the brown anole species became established in the lower ones. Higher branches are typically thinner, smoother, and less stable. They therefore predicted the green anoles would develop wider toe pads with more of the sticky scales that help them cling to branches. They thought that this change would occur because it would offer an advantage to lizards navigating small, unstable, smooth branches.

When the green anole lizard populations were sampled fifteen years after the experiment began, those living on the invaded islands had statistically larger toe pads with more sticky scales. The same difference was seen in the offspring of lizards hatched and raised in captivity, confirming the toe pad change was inborn and not a developmental change induced by the environment on juveniles.

“We did predict that we'd see a change, but the degree and quickness with which they evolved was surprising, says lead author Yoel Stuart. “To put this shift in perspective, if human height were evolving as fast as these lizards' toes, the height of an average American man would increase from about 5 foot 9 inches today to about 6 foot 4 inches within 20 generations -- an increase that would make the average U.S. male the height of an NBA shooting guard.”

Scientists call this sort of change “character displacement”—meaning that similar species competing with each other develop phenotypic differences that allow them to take advantage of different habitats or conditions. This is the sort of divergence Charles Darwin observed in Galápagos Island finches that different beak shapes would differ in their dominance to take advantage of the differing diets available to them. In recent years scientists have observed additional adaptive changes in the beak morphology of finches, and even the rapid “un-speciation” of finch species. Yet all were finches, not a new kind of animal. Likewise in this study, all the stickier-footed green anole lizards were still green anole lizards, just as we would expect.

While the researchers do not know just what advantages accrue to the higher-dwelling green lizards, they speculate that competition could involve food, safety, or both. These lizards do eat one another’s hatchlings. Stuart says, “So it may be that if you're a hatchling, you need to move up into the trees quickly or you'll get eaten. Maybe if you have bigger toe pads, you'll do that better than if you don't.” Thus the researchers are freely acknowledging that the larger toe pad variation, already present in some of the green hatchlings, may have offered some sort of survival advantage that resulted in the trait becoming dominant in that population.

The researchers did make a prediction that proved to be valid, but their prediction depended on natural selection among the variations available within the green anole genome. This study provides a marvelous demonstration of the speed with which selective pressure can prompt a kind of animal—in this case the anole lizard—to diversify and adapt. Animals diversify and vary within their created kinds, and it should be no surprise that they can do it quickly. Those offspring expressing the traits that best equip them to survive and reproduce in a stressed environment do so, and the population soon takes on their traits. But nothing about this study can be extrapolated in support of amoeba-to-Adam evolution. The green lizards didn’t grow wings and fly to safety. No new kind of animal evolved. No new anatomical structure evolved.

God in the beginning tells us that He created all kinds of living things to reproduce after their kinds, and He did so with a few normal-length days about 6,000 years ago. Based on the great diversity that can be observed to develop or is already present in each kind of living thing, we infer that God designed a great deal of potential variation in each kind of organism. After the global Flood, it would have been the variations available in the genomes of the animals that repopulated the earth that led to the biodiversity we see today.

But we do not observe animals evolving into new, more complex kinds of animals, for there is no way for animals to acquire the genetic information needed to evolve into a new, more complex kind of animal. Natural selection among the variations and even mutations seen in each kind of animal are not able to produce the new information that would be needed. There is no reason to assume that biodiversity takes millions of years or that variation provoked by competition within a lizard genus is a pattern for the evolution of complexity.