He might look bizarre to you, but not to a bug. With his impressive arsenal of specialized hunting equipment, the chameleon is truly a master of disaster.

Stealth. Patience. Vigilance. Slowly the hunter moves unseen among the branches. His independently rotating eyes constantly scan the leafy canopy in every direction. No insect is safe within striking distance of his infamous weapon—a fast-acting and deadly accurate catapulting tongue. Aided by his steady grip and excellent vision, the chameleon is always ready to seize unsuspecting prey.

Contrary to popular belief, however, the chameleon does not change color to match his background.

This hunter is often in danger of becoming the hunted, so hiding is a key to his survival. Contrary to popular belief, however, the chameleon does not change color to match his background. At rest, however, his coloration—usually shades of green or brown—generally serves well as camouflage.

As he hunts, the chameleon avoids detection from hungry predators by spending much of his time waiting for food to come to him. Even when he sits on a branch in full view, a predator may not spot him because he sits so still and blends in well with his surroundings

When on the move, he sometimes avoids being seen by rocking back and forth as he lurches ahead, possibly giving hungry eyes the illusion that he is simply a leaf or branch blowing in the wind. When threatened by an enemy from behind or enticed by a tasty treat ahead, he can stride forward quickly, but most of the time he is in no hurry.

All chameleons have clamp-like feet, with toes arranged in what is called a “zygodactyl” pattern. These clamps give the chameleon a steady grip with little effort.

The chameleon’s toes are fused together into clamps (called a zygodactyl pattern) so he can firmly grip branches (see photo on left). Each eye can move and focus separately—enabling the chameleon to see two different images at once (see photo on right).

The Creator also gave chameleons a fifth “limb,” a prehensile (gripping) tail. This useful tool increases the creature’s stability among the swaying branches and rescues him if he happens to lose his grip during an attack. When the chameleon closes in on a juicy bug just beyond his tongue’s reach, he may release the branch with his front feet, rising up to essentially “stand” at any angle. Then with his tail firmly grasping the branch, he takes a shot. Occasionally his back feet come off the branch. Whether it is intentional or he simply loses his grip, this allows him to reach a fraction of an inch farther. 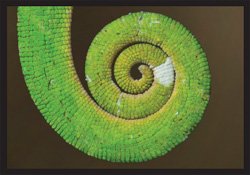 Chameleons draw from a full chest of amazing designs that help them survive in a fallen world. Only the handiwork of an all-wise, loving Creator could explain how so many wonderful tools could work together so seamlessly.

The chameleon’s tail can easily grasp branches to steady him or even to save him from a fall.

Due to these contortionist tactics, the chameleon occasionally finds himself dangling head-down. But his powerful tail rescues him from plummeting to the ground. Hanging from his tail, with the bug still in his mouth, he grabs a nearby branch to right himself.

The chameleon’s eyes have to be one of the most fascinating tools God gave him. These protruding optics are encased in cone-shaped eyelids, with only small openings at the tips for pupils. Like turrets on a tank or naval ship, they can swivel in a multitude of directions.

Amazingly, each eye rotates independently, seeing two different images at once. So the chameleon can see virtually 360 degrees around him without moving his head. This ability is extremely helpful when trying to spot a fly while keeping a close lookout for a hungry bird approaching from a different direction.

The chameleon needs only one eye to accurately judge distance. Each eye is like a telephoto lens, able to adjust and calculate distance with amazing precision. Furthermore, for his size, the chameleon’s eye forms the largest image for any vertebrate, giving him very sharp vision. As soon as he locates a potential meal, he turns his head to face it, bringing both eyes toward the front for binocular vision.

Zap! After he zeroes in, the chameleon quickly deals a deathblow with the ultimate bug-zapping weapon—a catapulting, grabbing tongue that accelerates five times faster than a fighter jet. Incredibly, he can project his tongue approximately twice his body length—roughly double the distance from the end of his snout to the base of his tail!

The long tongue is stored, accordion style, on something called a hyoid bone (actually made of cartilage), which serves as the stable “frame” for launching the catapult. The tongue fits over this rod in much the same way a long sleeve of a sweater is pushed up your arm.

After the chameleon takes aim, special muscles cock, trigger, and catapult the tongue. As the ballistic tongue launches, its core telescopes outward.

Any bug struck is usually doomed. A fraction of a second before impact, two muscles pull back the central part of the sticky tongue pad, forming a suction cup. As if this were not enough, the chameleon is equipped with a muscular, finger-like extension at the tip of his tongue, like an elephant has at the end of its trunk, that he uses to wrap around and envelop his prey. All of these precise actions are coordinated and completed in the blink of an eye. Another set of special muscles then reels the tongue back in, although at a slower speed.

Accelerating five times faster than a fighter jet, the chameleon’s tongue can project approximately his entire length to strike his unsuspecting prey.

We’ve only scratched the surface of the chameleon’s incredible design. Studies continually reveal even greater complexity than previously thought. For example, until 2004 scientists could not adequately explain the tongue’s incredible acceleration, which requires a tremendous amount of energy. Closer examination revealed amazing complexity that the lead researcher described as “a completely novel design.”1

Although many researchers, including non-creationists, often use the word design merely to describe something whose parts work incredibly well together, in reality it’s much more than that. We really are witnessing and studying the Creator’s amazingly complex and efficient design, clearly seen even in a fallen world (Romans 1:20). 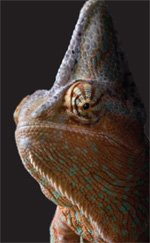 Perry and Stephanie McDorman are employees of Answers in Genesis–USA. Stephanie is Creation Museum registrar, overseeing the museum’s collections and Perry is museum naturalist and maintains the indoor live exhibits at the museum, including the chameleon exhibit. Both have biology degrees and are avid nature hobbyists.
Previous Article Hot-blooded Sharks Next Article Getting Close to Gross