Did you know that Answers in Genesis is engaged in a form of weather forecasting?

Just as when people hear the forecast of a huge storm approaching and they batten down, we at AiG want to give you a forecast of a different sort of storm and get you prepared. Actually, it’s a storm that’s been raging for 6,000 years, but it’s now intensifying. Thankfully, God has given us instructions in His Word, the Bible, on how to weather this kind of storm.

As you have probably guessed, the storm I’m talking about has a spiritual dimension. The spiritual storm raging around us is described in many verses, including the following:

Be sober, be vigilant; because your adversary the devil walks about like a roaring lion, seeking whom he may devour. (1 Peter 5:8)

And I’m sure you are familiar with this related verse: “For we do not wrestle against flesh and blood, but against principalities, against powers, against the rulers of the darkness of this age, against spiritual hosts of wickedness in the heavenly places” (Ephesians 6:12).

There are times when this storm intensifies, particularly when God’s people do their best to put on the whole armor of God (Ephesians 6) and actively fight against spiritual wickedness.

At Answers in Genesis, we experienced a huge spiritual storm after we announced the Lord had called us to build a Creation Museum. Secularists bent on attacking the Lord and His Word used lies and even a lawsuit to try to stop the museum project. But, just as God did with the wicked, He will (as explained by the Psalmist) have the victory:

The wicked have drawn the sword and have bent their bow, to cast down the poor and needy, to slay those who are of upright conduct. Their sword shall enter their own heart, and their bows shall be broken. (Psalm 37:14–15)

Yes, the work of the opponents of God will be fruitless. In fact, AiG can look back on the massive opposition to the museum and say (now seeing the success of the museum), “But as for you, you meant evil against me; but God meant it for good, in order to bring it about as it is this day, to save many people alive” (Genesis 50:20).

As a result of this museum opposition, we were blessed to obtain a much better piece of property in a prime location right off an interstate and also build a far bigger facility. And the media attention was enormous and gave the museum a high profile before it opened. Praise God, we’ve seen many people saved and the faith of tens of thousands of Christians revived and emboldened as they’ve been equipped. There are now many more soldiers ready and active to battle in a raging storm.

When we announced our next major outreach—a life-size Noah’s Ark (something the Lord through various circumstances clearly called us to build)—we once again predicted the weather. AiG expected that in a nation where the spiritual storm was intensifying (perhaps even more than what we had seen in the past), the Ark would be in the middle of it. And this is exactly what happened.

The storm that continues to build in this nation is the secularists’ overall attempt to rid the culture of the reminders of the Christian heritage of the USA.

The storm that continues to build in this nation is the secularists’ overall attempt to rid the culture of the reminders of the Christian heritage of the USA. The storm clouds are not just gathered above northern Kentucky and the Ark Encounter. The storm has been slowly spreading over the entire nation as secularists have intensified their propaganda campaign to undermine biblical Christianity. Along the way, they have even blinded many Christians to the true nature of the storm.

The secularists’ storm seeks to impose the religion of atheism on the culture. In one of their most blatant displays of intolerance as they undercut the “free exercise of religion” guaranteed under the U.S. Constitution, they are targeting our Ark Encounter project.

On the AiG website, through our social media efforts, and in media reports, you have probably learned about the legal action that AiG has taken against the State of Kentucky. Why? After much prayer and consultation, the AiG board realized that we must go to court over a major First Amendment matter because: 1. the State of Kentucky has violated both federal and state laws by engaging in viewpoint discrimination against the Ark project, and 2. more important, if we allowed the state’s decision to go unchallenged, the door would open wider for secularists to be allowed to undermine the free exercise of religion for other groups, including churches.

Kentucky has denied AiG a possible tax rebate a few years from now, one that is made available to any organization in Kentucky that fulfills certain objective criteria that will bring tourist dollars into Kentucky. And why did the state deny this to our Ark Encounter theme park? Because the project, the state says, is deemed as religious and thus ineligible to participate in the Kentucky Tourism Development Act rebate program. 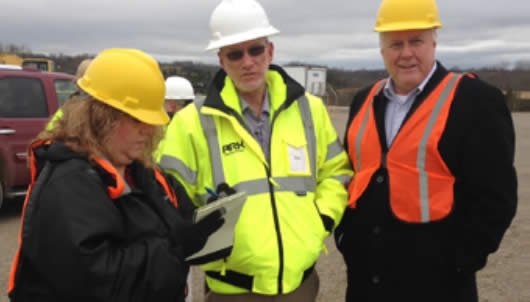 A reporter interviews Ken Ham and Mark Looy at the Ark Encounter site and gets the real scoop on the nature of the attacks on the Ark project.

AiG has launched a legal challenge because ultimately this issue affects not just those who stand with AiG, but all Christians—and indeed, people of all faiths. At issue here are our most fundamental freedoms as Americans: freedom of speech and the free exercise of religion. We are grateful that God has blessed us with two attorneys, with a great deal of experience in religious liberty cases, who will provide their services to AiG at no charge.

Because we know that this spiritual storm will continue to rage against the Ark project (and AiG in general), our theme for 2015 is “‘Weathering the Storm,” with the accompanying verse from Isaiah 25:4: “For You have been a strength to the poor, a strength to the needy in his distress, a refuge from the storm, a shade from the heat; for the blast of the terrible ones is as a storm against the wall.”

God never promises there won’t be such storms for His followers. In fact, for those who are actively doing battle for the King of Creation, they will encounter such storms. Thankfully, He does promise to be a refuge from the storm, and, by His power and providence, He will fight for us against the flood of persecution.

Please pray for us and stand with us as we continue to weather the storm. And please follow our website for developments about this legal case as they break—AnswersInGenesis.org. Also, to watch the Ark video, go to AnswersForFreedom.org.