Is Racism a “Major Problem”?

Is racism still a major problem in America? According to a 2018 poll, 64% of Americans answer this question with a “yes!” An additional 30% say it still exists, but it’s not a major problem. Only 3% believe it no longer exists in this nation. Why is racism so tenaciously clinging on? 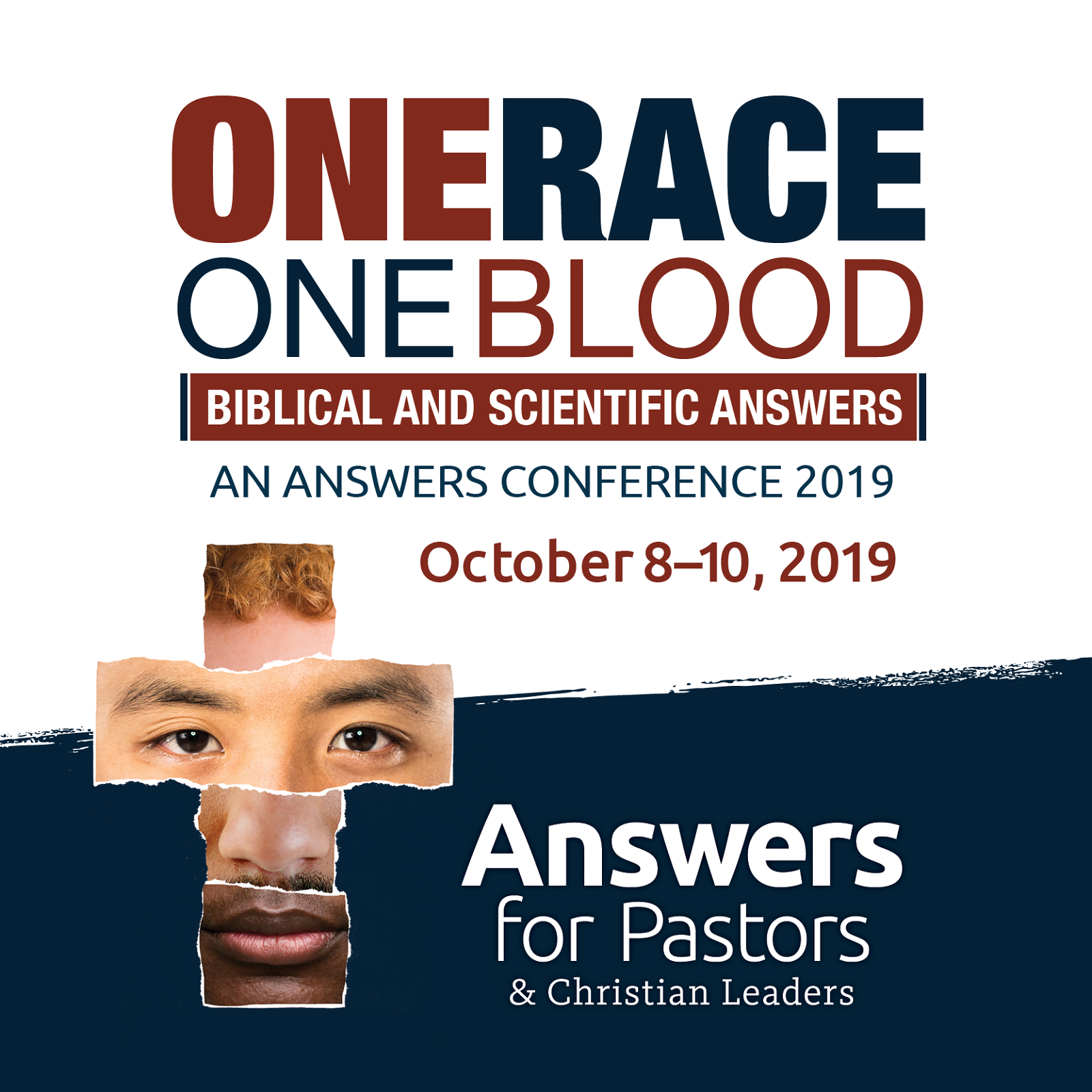 Discover the biblical and scientific answers to the issues of “race” that plague our world during our 2019 Answers for Pastors & Christian Leaders conference.

People point to many different issues, such as political or socioeconomic differences, in an attempt to explain what is, ultimately, a spiritual problem. Because the ultimate reason racism exists is simple—sin.

We’re not basically good, as is popular to believe today. We’re all sinners in rebellion against our Creator. Sin clouds our thinking in every area—including how we see other people. That’s why we can see racism, in one form or another, all throughout history, right into the present. Sin affects every individual and every society.

A lot of the kind of racism that exists in many places in the US today is a legacy of Darwinian ideas. Many could still recall old high school textbooks, such as the 1914 version of A Civic Biology by George William Hunter, where students were taught that there are five races, “the highest type of all, the Caucasians, represented by the civilized white inhabitants of Europe and America.”1 Such ideas flow directly from an evolutionary view. After all, Darwin, in his book The Descent of Man, wrote,

At some future period, not very distant as measured by centuries, the civilized races of man will almost certainly exterminate and replace the savage races throughout the world. At the same time the anthropomorphous apes . . . will no doubt be exterminated. The break between man and his nearest allies will then be wider, for it will intervene between man in a more civilized state, as we may hope, even than the Caucasian, and some ape as low as a baboon, instead of as now between the negro or Australian [aborigine] and the gorilla2 (emphasis added).

Although these evolutionary ideas are utterly wrong from both a genetic and biological standpoint (genetically and biologically we’re one race3), their sad legacy persists.

The Root of the Problem

If we don’t understand that racism is a spiritual problem, rooted in the wrong worldview (evolution) and the wrong kind of thinking (based on man’s fallible word), we ultimately won’t properly combat or defeat racism. It will just continue to rear its ugly head.

Since my teaching days back in the 1970s, I have had a passion for fighting racism, so I have always made sure that Answers in Genesis provides the proper biblical response (more on that below) in our resources. Both the Ark Encounter and the Creation Museum provide teaching on this issue, I frequently speak and write on it, and our VBS is a fun, but very powerful, look at the issue of race for kids. And our upcoming 2019 Answers for Pastors and Christian Leaders conference brings together a host of world-class speakers such as Dr. Voddie Baucham, Dr. Charles Ware, Dr. Johnny Hunt, myself, and other AiG favorites, to dive deep into this issue, all starting from a biblical perspective. I hope everyone (not just pastors and leaders!) can come to this conference.

We must first look to God’s Word for the answer (as we must do with everything). It must be our authority in all areas.

So if evolutionary ideas are the wrong way of looking at this issue, what is the proper perspective? Well, as I hinted above, we must first look to God’s Word for the answer (as we must do with everything). It must be our authority in all areas. And the history we find in God’s Word provides the answer to racism.

Genesis gives the correct origin of humanity. We are not products of evolution or a descendant of ape-like ancestors. We were created by God; man from dust, woman from his side (Genesis 2:7, 21–22). We’re uniquely made in his image (Genesis 1:27). Scripture is abundantly clear that Adam and Eve were the first couple (Genesis 3:20; 1 Corinthians 15:45), and that means we’re all descended from Adam and Eve. The fact that all humans belong to one biological race was confirmed by the human genome project in 2000.

Acts 17:26 makes this clear: “And he made from one man every nation of mankind to live on all the face of the earth.” We’re one blood, one race, one family. Every human that ever was, is, or will be, is our relative.

But the Bible’s history explains more than just the origin of the human race. It also explains why we struggle to love one another (among many other things!), and why we superficially look different from one another.

God commanded Adam (and Eve knew this as well) not to eat of one tree in the paradise of Eden or they would die, the just penalty for their rebellion (Genesis 2:16–17). But they rebelled against their Creator and brought sin and death into creation (Genesis 3). It’s because of Adam's sin that we’re all born into sin and bound in slavery to it (Romans 5:12, 6:20).

After the fall of mankind into sin, Genesis 6 tells us the world became so wicked that the thoughts of man’s heart was only evil. God judged man’s wickedness with a global flood. But, because he is rich in mercy, he saved Noah and his family, as well as two of every kind of land-dwelling, air-breathing animal (seven pairs of some) aboard the ark. The rest of sinful mankind was wiped out due to people’s flagrant sin against their Creator. This reduced the human population to just eight souls.

After the flood, Noah and his family were told, “Be fruitful and multiply and fill the earth” (Genesis 9:1). Around 100 years later, Noah’s descendants arrogantly defied the Lord’s command with this plan:

Come, let us build ourselves a city and a tower with its top in the heavens, and let us make a name for ourselves, lest we be dispersed over the face of the whole earth (Genesis 11:4).

We’re all one race, descended from Adam and Eve.

So God confused their language into many languages, forcing them to spread out and fill the earth (Genesis 11:7–9). This broke up the human gene pool and isolated families from one another. Soon, certain genetic characteristics that each group took with them became prominent within their group. This resulted in different people groups and cultures reflecting minor genetic variations such as skin shades (all the same basic color from a pigment called melanin), eye shapes, etc. But we’re all one race, descended from Adam and Eve.

Because we’ve all descended from Adam and Eve, we’re all one family. We’re all relatives! And, because of this shared ancestry, everyone, no matter which people group he belongs to or is descendant from, is a sinner in need of a Savior. And that Savior is the Lord Jesus Christ, who stepped into history as a descendant of Adam—our relative—to take our penalty of death for us. He then rose from the grave and now offers the free gift of salvation to all who will repent and believe in his name. Someday, all those who have trusted Christ as their savior will be part of one amazing family reunion:

After this I looked, and behold, a great multitude that no one could number, from every nation, from all tribes and peoples and languages, standing before the throne and before the Lamb, clothed in white robes, with palm branches in their hands, and crying out with a loud voice, “Salvation belongs to our God who sits on the throne, and to the Lamb!” (Revelation 7:9–10)

This is why we share Christ with others, including those who are seemingly different from us. Because we’re not that different. We’ve all descended from the same human couple, all initially in the same position before God (sinners who deserve death and hell), and all in need of a great and only Savior, the Lord Jesus Christ. This saving gospel message is for every tribe and nation because all humans belong to the one biological race. However, there are two races spiritually, those who have trusted Christ for salvation and those who have not. We so want to see everyone in the one spiritual race, saved for eternity.

What a difference it makes when we see everyone as our relative and part of our family!