AiG speaker Carl Kerby was approached by many Kansans last weekend who wanted to discuss the still-simmering controversy over the teaching of biological origins in public schools.

After giving several talks in central Kansas this past weekend, AiG speaker Carl Kerby was approached by many Kansans who wanted to discuss the still-simmering controversy (going back into the ‘90s) over the teaching of biological origins in the state’s public school science classes. 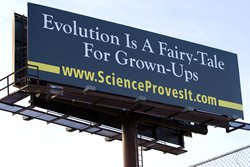 This billboard is but one manifestation of the growing intensity over the creation/evolution debate in Kansas.

A long-time AiG supporter alerted us to this highway billboard that was posted recently near Kansas City. She tells us that it can be seen on “the southbound traffic leaving downtown Kansas City on I-35 just before the Cambridge Circle exit. It is on the north side of the highway, lit up at night and has text written in white on a black background, with yellow lettering for the website. About 95,000 cars pass this billboard daily.”

The man behind the billboard, we are told, is a 1966 graduate of the Massachusetts Institute of Technology (MIT). The wording he selected is from a comment attributed to a French professor that “Evolutionism is a fairy tale for grown-ups.”1

In 1999, Kansas was often portrayed as backward by the national and international media (and worse by mocking late-night TV comedians) because of the decision by its state school board that evolution was not to be taught as fact in science classes. The controversy eventually became so shrill that many evolutionists and media outlets falsely claimed that evolution had been removed from the state science curriculum. Evolution, despite recurring articles from news sources like Time magazine to the contrary, remained in the science standards (the word could be found in a few places in the document). These standards, by the way, are used as guidelines for school districts to prepare for statewide science tests.

In recent times, the battle line in the creation/evolution wars has returned to Kansas after a spirited campaign in Pennsylvania. (In Dover, Pennsylvania, a federal judge ruled last month against a Dover school district that had mandated that science teachers read a brief statement about intelligent design to students.)

Last year, the Kansas State Board of Education updated its science standards to ensure that public school students will learn about the scientific evidence both for and against Darwinian evolution. Ohio is another state in recent times that has allowed criticism of evolution in the public school classroom. The standards in Kansas say that high school students must understand major evolutionary concepts, and, like Ohio, the school board does not propose teaching intelligent design. Nevertheless (according to a November 8, 2005 Reuters article), evolutionary critics are deeply concerned. Reuters reports that this is due to the fact that “the standards go farther than any other state in opening up evolutionary principles to criticism, and implementation will lead to more aggressive undermining of scientific principles in other states and will ultimately weaken US achievements in scientific areas.”

One critic of these school board efforts in Ohio and Kansas to de-emphasize the teaching of evolution as fact is evolutionary biologist Dr. Kenneth Miller from Brown University. He testified in the Pennsylvania trial against intelligent design. Commenting on the Kansas school board’s vote to allow criticism of Darwinian evolution, Miller told the Lawrence Journal-World newspaper (a Kansas paper, November 8) that what is going on in Kansas is much more radical and much more dangerous to science education than what has been happening in Pennsylvania.

This conclusion was challenged by Dr. Steve Abrams, chairman of the Kansas board (and a creationist). In an interview with the Kansas City Star last month, Dr. Abrams noted the “Dover board required the mention of intelligent design, but the Kansas board inserted significant criticism of evolution into the school guidelines.” He added that critics of the Kansas decision were trying “to paint us with whatever brush they can. … It’s apples and oranges. We do not have intelligent design in the standards.”2

Such was the backdrop when Kerby, one of AiG’s most in-demand speakers, gave several Bible-affirming talks in central Kansas last weekend. He reported that in addition to the many Kansans he talked to about the school controversy over the teaching of biological origins, many people indicated how AiG had been a blessing in their lives. One individual said that God used AiG’s daily radio program to dramatically change his life; after listening to many Bible-upholding broadcasts, his faith was so built up that he decided to become active in his church and to start teaching the Bible. Also, a sixth-grade public school science teacher told Carl that she had been using AiG materials to teach creation (as well as evolution, as she is required to do) in her classroom. And a science professor in a theologically liberal Christian college indicated that as a result of Carl’s presentations, he would now become bolder on his campus to speak up for the accuracy of the book of Genesis.

Pray for the Christians in Kansas (and other states) who are attempting to bring academic freedom to their public schools by ensuring that molecules-to-man evolution is not taught uncritically in their science classes.