In a world that scoffs at the idea of a global Flood and a man called Noah who took his family and representative kinds of land animals on an enormous boat, what do these 'bathtub arks' really say?

They look cute, and they appear in ornaments, broaches, necklaces, as pictures in children’s books and paintings on kindergarten walls in churches and schools, representing the account of Noah’s Ark. But in a world that scoffs at the idea of a global Flood and a man called Noah who took his family and representative kinds of land animals on an enormous boat, what do these “bathtub arks” really say?

Consider some of the serious lessons we should learn from the account of Noah’s Flood in Genesis 6-9.

Just as Peter describes in 2 Peter, most of the world today scoffs at those who believe in Noah’s Flood and Noah’s Ark. The majority of scientists claim there never was a global Flood. Besides which, they claim, Noah couldn’t have fit all the animals on board-and that the boat would have sunk.

When children see the “bathtub ark”-what is it really saying to them? I suggest that, in a sense, it is reinforcing what the world is claiming: that Noah’s Ark was just a “story” or “fairy tale,” and that Noah couldn’t have accommodated all the animals on board-and certainly this kind of ark would not have survived a Flood. In the past, this issue may not have mattered as much, but in our present world, where the majority don’t want to believe they are sinners, under the judgment of a Holy God, they thus scoff at the event of Noah’s Flood.

I believe that, in a subtle but real way, the “bathtub arks” help the world scoff at the account of Noah’s Ark and the Flood as given in the Bible. In fact, one of the accusations humanists make in their books and Web sites is that Noah could not have fit all the animals on board. The “bathtub ark” certainly reinforces that. 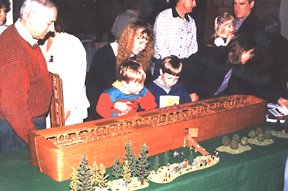 The Creation Museum of Answers in Genesis (near Cincinnati) will feature at least one model of the Ark like the one (left), made by an AiG supporter who spent 400 hours building it. He took the greatest care to make sure that this scale model of the Ark was constructed according to the dimensions given in the Bible.

When children look at this model, they often gasp when they see the relative size of people and animals (including dinosaurs). As they consider the enormous size of this ship, they realize that Noah could fit the animals needed on the Ark, and that this boat was built to survive the Flood. We then teach them how this Ark is a symbol of Christ and remind them-just as Noah did-how important it is for them to go through the “door” to be saved.

Don’t you think it’s time the church turned its “bathtub arks” into real ones?