Sunlight is important to human existence, and when deprived of it, some people become unhappy. How might Noah and his family addressed the Seasonal Affective Disorder?

Did Noah and his family get sad on the Ark? No, not the unhappy or sorrowful sad (although they may have had a dose of that, too), but the Seasonal Affective Disorder called S.A.D.—which may occur when winter days grow short. Sunlight is important to human existence, and when deprived of it, some people become unhappy. 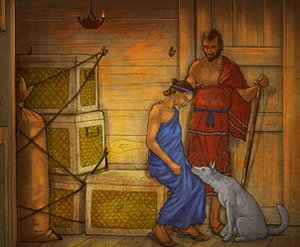 This drawing depicts Shem and his wife on the Ark. How did the eight people and the animals deal with light issues?

Whatever season it was when the Flood began, the initial forty days of rain (Genesis 7:12) would have featured skies that were cloudy, dark, and gloomy. After the rain stopped, it’s likely the skies remained overcast from volcanic smoke as the world still convulsed from the “fountains of the great deep” being broken apart (Genesis 7:11). That’s a recipe for S.A.D.

How would the animals have reacted to the darkened conditions? Many animals have the ability to enter states of dormancy called hibernation or estivation. Noah and his family, on the other hand, did not have this ability, so how did they cope?

We have no full understanding of pre-Flood technology, which likely was far more advanced than modern man gives Noah credit. Noah may very well have used artificial lighting. He might have used a technology similar to today’s light tubes.

Another possibility is that their bodies, still so near to the original “very good” creation, were not susceptible to S.A.D. And of course, God might have miraculously protected Noah and his family from S.A.D., as He did throughout the entire Flood event.