Putting the Ark into Perspective

on January 23, 2014
Featured in Thinking Outside the Box
Share:
Email Using:
Gmail Yahoo! Outlook Other

At approximately 510 feet long, just how big was Noah’s Ark?

The Bible tells us Noah’s Ark was 300 cubits long (Genesis 6:15). Several months ago in this column, we discussed the various cubits of ancient times and their lengths.

Here at AiG and the Ark Encounter, we’ve chosen to use the Nippur Cubit for the Ark we are building. At 20.4 inches, this works out to be just over 1.70 feet per cubit, making the Ark about 510 feet long.

Let’s visualize how long this actually is by comparing it to items we are familiar seeing. 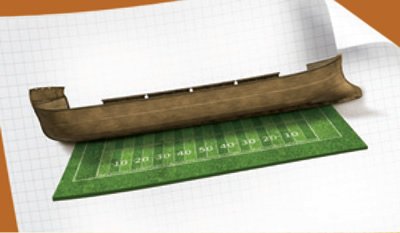 Looking at it like this, it’s easy to get some perspective on the Ark’s length. Try to come up with your own comparisons. Here’s a fun one: the Ark was about as long as 170 acoustic guitars.

You won’t believe your eyes when you see the finished Ark south of Cincinnati and take in how large this ship was!

Previous Article S.A.D. Days Next Article Legends of the Flood