on January 6, 2016
Featured in Thinking Outside the Box
Share:
Email Using:
Gmail Yahoo! Outlook Other

For as in the days before the flood, they were eating and drinking, marrying and giving in marriage, until the day that Noah entered the ark, and did not know until the flood came and took them all away. (Matthew 24:38–39).

The New Testament repeats the truth taught in Genesis that only eight people survived the global Flood (1 Peter 3:20). Every person outside the Ark when the Flood began perished. How many people in all lost their lives at that time? The Bible does not reveal how many people were on Earth when the Flood started, so we can only offer educated guesses about the pre-Flood population.

Some people believe the population was relatively low. The Bible explains that people were extremely corrupt and violent prior to the Flood. It is not hard to imagine the world being filled with wars, diseases, and other factors that would keep the population in check. 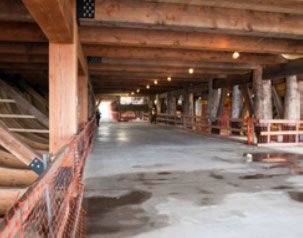 A recent photo of the first deck of the Ark under construction.

The judgment of the Flood caught people unawares, just as the coming judgment (2 Peter 3) will fall on a world that does not expect it. Earth currently has about seven billion inhabitants. How many of them will be judged with eternal condemnation if the Lord were to return soon? We must share the gospel of Jesus Christ while we still have the opportunity, and AiG’s evangelistic Ark, opening July 7 in Northern Kentucky, will reach millions of souls with the gospel.

Previous Article Dioramas—Bringing Biblical Accounts to Life Next Article What Became of Noah and His Wife?