Behind the Scenes: A Closer Look at the Creation Museum

by Catherine Myers on May 7, 2007
Featured in Answers Magazine
Share:
Email Using:
Gmail Yahoo! Outlook Other

Many visitors to the Creation Museum will be surprised when they encounter the Noah’s Ark exhibits along the Creation Walk portion of the museum tour.

Prepare to have your preconceptions challenged! Many visitors to the Creation Museum will be surprised when they encounter the Noah’s Ark exhibits along the Creation Walk portion of the museum tour. Comprised of two main areas—the massive Ark construction site and the “Voyage of the Ark” dioramas—these exhibits will force guests to rethink their ideas and beliefs about the Ark, especially concerning its construction, the animals, and even the Flood itself.

The exhibits are designed by Tim Lovett, a leading expert on Noah’s Ark and the host of worldwideflood.com. Lovett has a degree in mechanical engineering from Sydney University (Australia), as well as an advanced degree in technical education. An engineer, teacher, and designer, Lovett was intrigued by the engineering challenges Noah had to solve when he built the Ark. Thus began Lovett’s personal journey of research into wooden ships and modern maritime lore so that he could better understand the marvelous design of the Ark and its ability to survive the cataclysmic Flood.

An artist’s depiction of the Ark construction site: 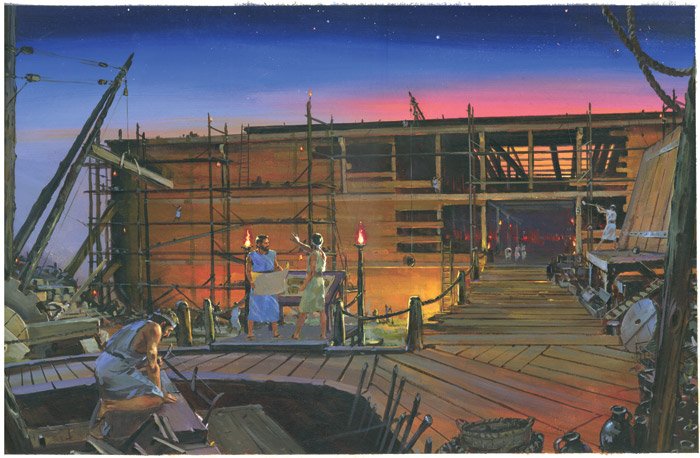 Noah’s work crew labors to finish the ship in a scene fraught with activity—workers are sawing, hammering, and hoisting beams. Museum guests will walk through the work site listening to the workers’ conversations. 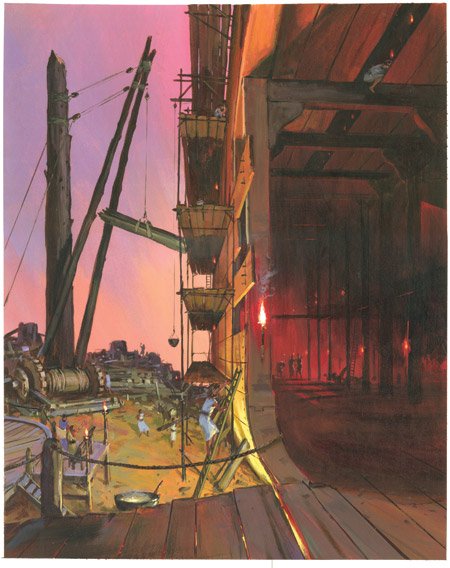 Guests can also walk onto the Ark to see the Ark’s interior layout, envisioning what the real Ark might have been like when fully loaded with animals and supplies.

Museum guests will learn more about the Ark and the Flood through a series of ten dioramas. 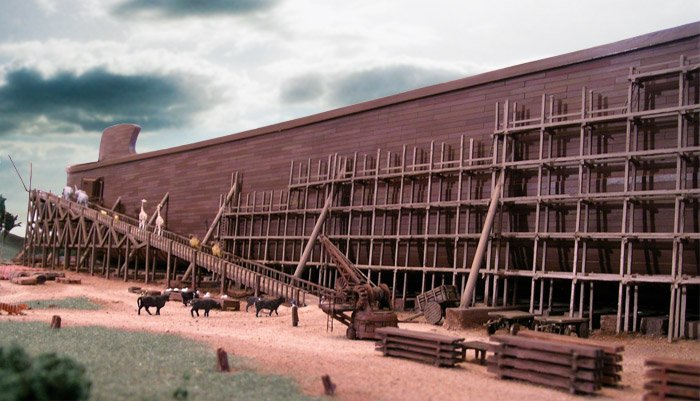 With this diorama, visitors will get a feel for the incredible scale of the Ark as they see animals entering the Ark two by two (and seven of some) as God brought them to Noah. 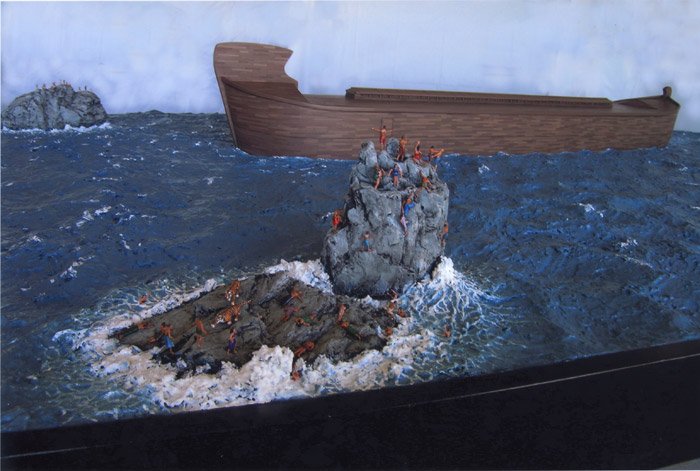 Museum guests will also see a diorama of the Ark floating alone as people and animals huddle on the highest point of land, contemplating the full gravity of the global Flood. 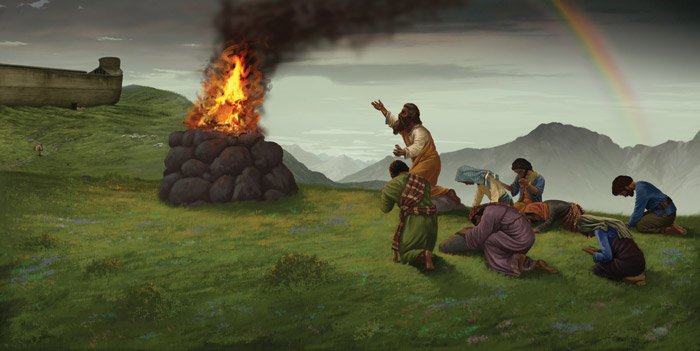 The final diorama depicts the rainbow covenant between God, man, and the animal kinds that were with Noah on the Ark. God promised to never flood the entire earth again.

Based on the biblical proportions of the Ark that God provided Noah, Lovett built and tested various models of the ship in numerous weather and wave conditions. His extensive research yielded much information that has helped to further define likely details regarding the Ark’s shape, strength, and stability. Further, Lovett performed or coordinated research on the Ark’s likely payload, including the animals, foodstuffs, and water storage needed for survival. Many of his findings are integrated into the exhibits at the Creation Museum and will give visitors a new perspective into the realities that Noah faced, going far beyond the storybook Sunday school ideas that most modern Christians have been taught.

The Ark exhibits are the third “C” (Catastrophe) in the museum’s seven C’s of biblical history. These exhibits follow Corruption Valley, where guests see how evil filled the world after Adam’s Fall. The Ark construction site then shows how Noah prepared for God’s impending judgment on the world.

Noah could have been wealthy enough to hire a crew of laborers, especially at certain stages of construction.

Rising a stunning 35 feet (10.7 m) in height, the unfinished Ark, which is too tall to fit in the full 45-foot (13.7-m) tall museum space, looms over Noah, his foreman, and his busy work crew. While it was possible for Noah and his family to build the Ark by themselves, Scripture does not require this view. Lovett believes that Noah could have been wealthy enough to hire a crew of laborers, especially at certain stages of construction. Gone is the stereotype of Noah all alone, chipping away with an axe-like adze!

Full-size, life-like workers are sawing wood, pounding pegs, and stirring a pot of pitch. Most characters are animatronic, and visitors will overhear their conversations. Grumblers are scoffing at Noah and God’s Word, while Noah is patiently pleading with his foreman to join him on the Ark.

As guests enter and actually walk through the midst of the scene, they pass a set of drawings that reflect the divine specifications of the Ark. Guests then have the option to take a side path into the hull of the unfinished Ark, where they will see details about the interior decks. Upon leaving the construction site, visitors are drawn into the “Voyage of the Ark,” a series of ten dioramas that reveal the history of the Ark and Flood. At the center are additional video displays on the Flood, as well as an interactive kiosk where visitors can find answers to common questions.

These dioramas follow the biblical account of Noah’s voyage, along with technical and logistical exhibits covering a variety of intriguing questions such as “How did the animals and supplies get loaded onto the Ark?” “What geological, hydrological, and meteorological events took place during the Flood?” “Did the Flood really cover the whole earth?” “What was life like for Noah and his family?” “How was it possible for all the animals to fit onto the Ark?” “How did Noah and his family care for the animals—how did they feed, water, and clean up after them?” and “How did plants, insects, and fish survive the Flood?” The last diorama in this section of the museum is the Rainbow Covenant—God’s promise never to destroy the world again with a global Flood.

Today, just as He did in Noah’s time, God tempers His impending judgment on the sinfulness of mankind with mercy. “The Lord is . . . longsuffering toward us, not willing that any should perish but that all should come to repentance” (2 Peter 3:9, NKJV). One day, God will send His final judgment—this time by fire (2 Peter 3:7), but God has again provided a means of escape—Jesus Christ, our Ark of Salvation. (That part of history is portrayed in another section of the museum’s walk through biblical history!) Noah’s Ark and the Flood are sobering reminders of judgment ahead and our need to be saved.

Come, bring your family and unsaved loved ones and, as the museum staff exhorts all who enter, “Prepare to believe!”

The Creation Museum and AiG headquarters are located on I-275 only 2 exits from the Cincinnati International Airport. Opening in late May 2007.