A museum scriptwriter shares his inside story

Imagine being responsible for the content in what is sure to be the most scrutinized museum on the planet. That is my job: director of content development at Answers in Genesis’ Creation Museum.

In designing a museum for the next generation, we clearly understood from the start that we had to be forward thinking, to gather the latest research, and to imagine where science will be five years from now. We needed a science reference board, made up of some of the very best experts in every field.

Over the past four years, I had the humbling privilege of watching God at work, bringing together people of diverse specialties and personalities for this awesome moment in the history of science and the church. 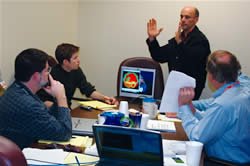 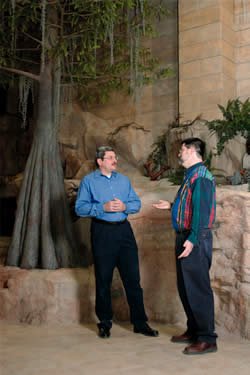 Mike Matthews, director of content development at the Creation Museum, has met with numerous scientists and other experts from around the world. A few of these include Kurt Wise (bottom photo), Tim Lovett, and ICR scientist John Baumgardner (top photo). Tens of thousands of hours have gone into interviews, meetings, and revisions.

“Astronomers have a creative name for Jupiter’s red spot—they call it the Red Spot.”

“Based on genetics, I think Adam’s chest hair needs to be short, like Sean Connery’s.”

The conversations with scientists were never dull. In one memorable discussion, a sixty-something college professor threw back his chair, jumped up, then started lumbering about like an ape to explain how a monkey walks.

They came from all walks of life, whether a cabin in Montana or the bustling heart of San Diego. They hailed from places as different as Romania, Crimea, and Queensland. Some scientists chatted easily about Shakespeare or Sparky Anderson, while others knew only Miocene and Pleistocene. But all shared the same passion—glorifying the Creator and honoring His Word.

One of the most thrilling opportunities, for me personally, was to work with an old hallmate of mine from college. When I was a lowly freshman at the University of Chicago, he introduced me to the radical idea that Genesis 1–11 is real history. As a result of his sharing God’s Word with me, I trusted Christ as my Savior in the dormitory of that heathen center of learning.

He went off to Harvard the next year with dreams of becoming a scientist, while I became a writer. Our paths did not cross—except for an occasional Christmas card—over the next twenty-five years. But in God’s perfect timing, He brought us back together for the museum project. You’ll find him in our “Fossil Order” video: Kurt Wise, Ph.D., paleontology, Harvard University.

Most science in the museum is fairly straightforward, and scientists have very little, if any, disagreement. The wonders of God’s creation are “clearly seen,” as Paul says in Romans 1:20.

But the Flood Geology Room was another thing altogether. The scientists agree that the rock layers were laid down in the past 6,000 years, but they debate which rocks were laid down before, during, or after the Flood. Each interpretation has its own supporters and theories.

Early in the project, I thought a simple solution would be to scatter geologic artifacts around the room—coal, fossils, rocks, etc.—and with each artifact, present a theory that explains the fact. Different scientists could present different theories. It didn’t matter how well they fit together, or so I thought.

I was wrong. As the potential contradictions became clearer, I had to rethink the whole concept for the room.

After much discussion about how to write the overall museum script, we decided to present a set of theories that fit together as a consistent whole. While the current presentation acknowledges differences among scientists, it strives to embrace the very best from several fields, including experts on caves, climate, rocks, fossils, and biology.

The experience of working with all these great men and women of science has reminded me that God is concerned about building people and relationships, not just buildings. The Creator is using AiG’s Creation Museum as a unifying center, where scientists of all stripes can meet together and iron out differences. The ultimate goal is a God-honoring message about the unity of history, science, and the Bible. In turn, we trust that God will use this message to unite tens of thousands of wayward hearts with their Creator.

When most people think of museum “content,” they think of a thicket of words that smother flat panels. But the writers and designers at the Creation Museum had a different goal. They wanted to immerse guests in a multi-media experience, borrowing the best from every medium, including film, sound, art, sculpture, and artifacts.

The challenge for Mike Matthews, director of content development, was to find the best combination of videos, audio, and scenes that would stir hearts—not just give facts—about the history of God’s work of redemption.

Throughout the design and construction of the museum, Mike worked side-by-side with museum designer, Patrick Marsh. Mike focused on the themes and emotional impact of the message, while Patrick concentrated on the attractiveness of the exhibits.

In addition, Mike oversaw the production of nearly fifty videos and the acquisition of fossils and other artifacts.

When talking about his work, Mike is quick to give others credit, saying, “This museum is really the work of Ken Ham, creationists in general, and God’s church over the years. Pat and I are just borrowing the best from anything out there and repackaging it.”

Previous Article Presuppositions in the Classroom Next Article Noah’s Ship: Like Nothing You’ve Seen Before