The portrait retains the flat forehead, prominent brow, and jutting jaw of the ape that Karabo was.

Australopithecus sediba got a makeover to celebrate the display of his mortal remains in London’s Natural History Museum. The “boy,” who along with his “mother” was presented to the scientific public in the 2011 September 9 issue of Science, underwent “forensic reconstruction” to produce a portrait perfect for his role as oldest ape-boy. Along with the picture comes his new name, Karabo, meaning “the answer,” as he is supposedly the answer to the evolutionary quest for the missing link.

Lee Berger—Karabo’s discoverer, publicist, and greatest fan—says the intact skull made this realistic portrait possible. “That is probably him. Normally with early human fossils, they are in such lousy condition, but here the anatomy is pretty much fixed. I think it’s the most accurate that’s ever been done. It’s a more human-like nose than we have seen before, he’s just wrinkling it because he’s smiling, chimps can’t smile.” Thus, since chimps can’t smile, and Karabo can, Berger is telling us Karabo really is the missing link between apelike ancestors and humans.

Berger asserts his South African fossil is the oldest known direct ancestor of Homo erectus. He points out the long thumb on the “human-like” hand, saying, “We’ve never seen that before. It really is undeniable when you lay it in your hand that it’s not a chimp. It looks like a hand capable of making tools. He shares more with humans than anything else ever discovered but is still so primitive and that’s exciting.”

Not all experts agree with Berger’s assessment that Au. sediba’s hand anatomy suggests Karabo used tools. The long “human-like” thumb is actually much longer than a human thumb, and the fingers are all proportionately shorter than those of humans. Paleoanthropologist William Jungers of Stony Brook “has seen the original fossils. He thinks [the hand is] ‘an australopithecine hand in essentially all relevant respects’ and didn’t manipulate objects in an advanced humanlike way.”1 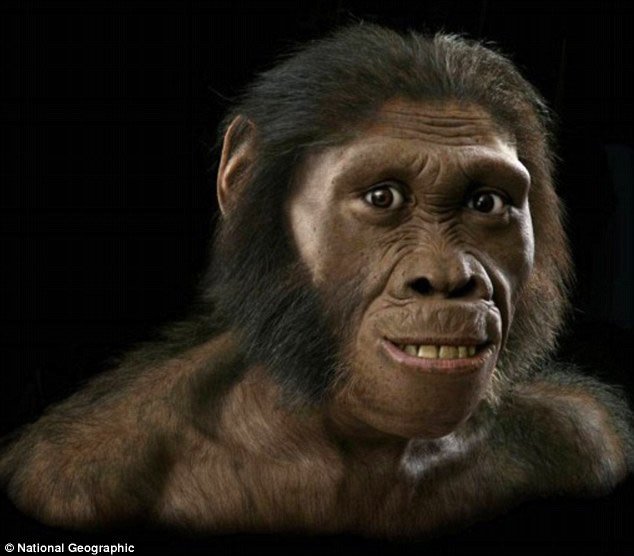 The portrait retains the flat forehead, prominent brow, and jutting jaw of the ape that Karabo was. His face has lost some of the ape-slope seen on the real skull. Karabo has also acquired extra cranial capacity since we saw him in September!

Karabo seems the consummate ape-boy, blending skeletal features of ape and human with fleshed out human features and the emotionally charged eyes of a bright, happy young man.

Paleo-artist John Gurche gave Karabo a fetching thin-lipped smile to go with his wrinkled nose, furrowed brow, hip haircut with neatly trimmed facial hair, and expressive eyes in which white sclera shine forth his humanity. And while Berger claims the only guesswork on the artist’s rendition is the hair pattern and skin tone, fossilized skulls do not preserve a nose (wrinkled or otherwise), lips, or expressive eyes. The original fossil did not have even an elevated nasal bone. The fossil record of scleral color is, to say the least, nonexistent. And there is no such thing as a fossilized smile. Karabo’s portrait drips with far more humanity than typical forensic reconstructions publicized by law enforcement. In short, Karabo seems the consummate ape-boy, blending skeletal features of ape and human with fleshed out human features and the emotionally charged eyes of a bright, happy young man.

What better way for Berger bring his case before the public? Seeing is believing. But painting happy eyes and a smile on an artistically enhanced skull does not make Karabo “the answer” to the quest for a missing link. Karabo’s skeletal features are typical of apes, not humans. None of its skeletal parameters are transitional forms en route to becoming human but are simply minor variations of features found on apes.

Karabo is probably a variation within the australopithecine kind, but it definitely is not a human ancestor. Genesis tells us that God created humans and land animals on the sixth day, but only humans are made in the image of God. Man is unique physically, mentally, and spiritually. Any similarities shared with apes occur because we share a common Designer, not a common ancestry. “The answer” is in Genesis, not the Natural History Museum. And the only missing links are in the minds of evolutionists like Berger.