Want to race? It’s easy to see why white-tailed deer have become winners in the Americas. Their grace and speed are legendary, enabling them to survive in a variety of habitats, where few others can.

I’d never seen anything like it. As our car approached a four-way stop, we saw a white-tailed deer standing at the corner. It looked both ways and, when the street was clear, calmly made its way across the crosswalk. I wish all the deer in our neighborhood would learn that trick.

Though my family lives in the suburbs, we still catch glimpses of this incredible natural athlete browsing near the edge of a field or darting across the road. Usually the deer that gets hit by a car is not the furtive leader but a less-watchful follower. So we’ve learned to slow down, glance in the direction that the first deer darted from, and wait for others to cross safely.

I’ve loved these fleet-footed beauties since childhood, and my wonder has only grown deeper as I’ve studied them as a veterinarian. 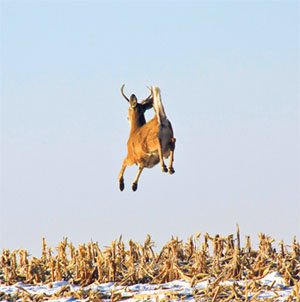 White-tailed deer have been reported to jump fences over 8 feet tall.

These are the most common large wild mammals in the Americas. They can be found from southern Canada, throughout most of the United States, down to Central America, and even into parts of South America. Their extensive range is a direct result of their amazing adaptability. They are able to live in a variety of habitats, from the forests of the northeastern U.S. to the swamps of Florida, from farmlands to desolate desert.

One of the keys to any athlete’s success is appropriate clothing. God understood this when He designed the deer’s coat. Most of the coat of a white-tailed deer is a reddish brown in the summer, turning to a thicker gray-brown in fall and winter. These colors help it hide.

Fawns have white spots on their reddish brown backs. These spots look uncannily like sunlight hitting the ground after it filters through the trees. The color pattern serves as excellent camouflage, making fawns nearly invisible as they lie still on the forest floor.

White hairs cover the underside of the deer’s tail. These remain out of sight until the deer flees, when the tail is held up like a flag, flashing a silent warning to other deer—danger! This unique behavior gives the species the distinct appearance that inspired its name.

The Grace and Appetite of an Athlete

Deer are stunningly fleet-footed, agile athletes. They can sprint at the same speed as a car whizzing through the neighborhood—around 35–40 mph (55–65 km/h). If needed, they can maintain speeds of 25 mph (40 km/h) for several miles, even through forest thickets. (The fastest marathon runner could only achieve a mere 12.6 mph.) 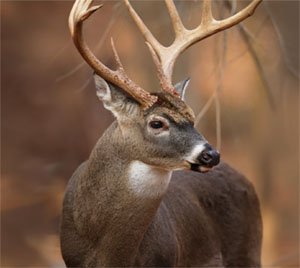 No athlete is complete without proper equipment. A buck’s antlers show off his health and aid in competitions between bucks.

The white-tail can gracefully jump tall fences and leap long distances. A normal adult deer can leap 30 feet (9 m), farther than the longest leap ever recorded by a human (29.4 feet [9 m]). They are even good swimmers.

White-tailed deer have an unusual diet for athletes. Instead of the easily digestible diets we associate with humans, they enjoy buds, twigs, and leaves, as well as seeds and grass.

A low-quality diet means that deer must eat a lot, but they don’t always have time to properly chew the food because of predators. So God equipped deer to eat and run. They can swallow food quickly, and later, when they are resting in a safe place, they bring the food back up to the mouth and rechew it so the bacteria can more easily digest it. This is known as chewing cud.

No athlete is complete without equipment, be it bat, cleats, or head-gear. Bucks (male deer) grow antlers. Large antlers show off their health and good breeding to the ladies. Antlers also aid in competition between bucks. Like football players butting helmets, deer will butt each other over and over again to see who can last the longest. These fights determine who gets the pretty doe (female deer).

These amazing bony structures begin to grow in the spring. The antlers are initially covered by a type of skin called velvet, which itself is covered with soft hairs. The velvet contains blood vessels to supply nutrients to the rapidly growing antlers, which can add half an inch in a single day. In the late summer or fall, antler growth stops. In the winter, breeding season ends, antlers are shed, and the whole process repeats.

Be it running or butting or jumping, white-tailed deer are the ultimate athletes. Beautiful and fleet of foot, they excel any humans. God holds deer up as examples of the speed and agility that we can enjoy in our walk with Him. “He makes my feet like the feet of deer, and sets me on my high places” (Psalm 18:33).

Dr. Jean K. Lightner earned her undergraduate degree in animal science and worked for three years as a veterinary medical officer for the U.S. Department of Agriculture. She is also researching ruminants to find out how current species correspond to the original “created kinds.”
Next Article The Bible Is Clear: Adam Was a Historical Person