The platypus has perplexed scientists since its discovery by Europeans in the late 18th century.

Imagine, if you will, the excited glances exchanged if paleontologists were to uncover a fossil that looked like a mammal, yet also had bird and reptilian features. The immediate reaction would probably be to declare that here was, clearly, a transitional creature that provided an evolutionary link between mammals and their non-mammalian ancestors.

That might well be the conclusion drawn if a platypus fossil were found today, without living examples around to indicate otherwise.

The platypus has perplexed scientists since its discovery by Europeans in the late 18th century.

The platypus has perplexed scientists since its discovery by Europeans in the late 18th century. Here is a creature that has a furry body like most mammals, webbed feet and a bill like a duck, and a reproductive system that involves young being hatched from eggs before suckling from their mothers.

In fact, when the first platypus specimen reached England in 1799 (it was long dead), it was regarded as a hoax, a “high frolic practised on the scientific community by some colonial prankster”.1 Experts of the day could not reconcile the fact that a duck-billed mammal with webbed feet and claws and a beaver-like tail could really exist. One zoologist, sure it was fraudulent, tried to remove the “duck’s bill” from the pelt; his scissor-marks can still be seen on the original, in London’s British Museum of Natural History.

Sceptics have often assumed that a creature as “fragile”, and needing such specialized habitats, as the platypus could not have made it across Australia’s huge inland deserts to get to the eastern seaboard and Tasmania from Ararat (the resting place of the Ark).

However, with the increased moisture in the atmosphere from the post-Flood Ice Age conditions, central Australia was very likely a lushly watered region that dried up only later.

Also, today’s platypus is from a greatly narrowed gene pool. It lost characteristics (such as adult teeth) as selection thinned out the gene pool more and more, making it less robust than its ancestor.

In fact, an evolutionist expert has described today’s platypus as “extremely degenerate” by comparison with its ancestors.1

The creature was ultimately deemed to be genuine, but it took another 90 years of long and arduous investigation and experimentation before scientists had a better understanding of its complexities.

The platypus and the echidna (only found alive in Australia) are the only known monotremes—mammals that lay reptile-like eggs and suckle their young. But, even when suckling, they are not like other mammals; the milk is not produced through teats, but is apparently sucked from the skin as it exudes from the ducts of the mammary glands.2

In its natural habitat—lakes and streams in eastern Australia and Tasmania—the platypus reveals an amazing array of design features. It uses claws for burrowing and its webbed feet for swimming (the web, which extends beyond the claws, is folded under the palms when the platypus is on land), while its broad, flat tail helps with diving.2 Fine fur, made up of 900 hairs covering each square millimetre of skin has two layers—a woolly undercoat and shiny longer hair—that keep most of the platypus’s body dry when diving.3

The platypus often swims along the surface, with only the upper part of the muzzle and a small part of the head above water. When it submerges, it has a fold of skin that closes over its eyes and ears.4 Its duck-like bill is actually a sensitive muzzle that allows the platypus to find tiny food morsels at the bottom of murky lakes and rivers and under rocks using highly developed electro-receptors (see aside below).

For more than 100 years, debate has raged within the scientific community about various aspects of the platypus, muted only briefly and very occasionally by (very infrequent) new discoveries (such as the proof in 1884 that the creature laid eggs, rather than gave birth to live young).5

Of particular interest has been the creature’s origin. Encyclopaedia Britannica says that “little is known of their ancestry” and: “Most authorities believe the order Monotremata originated from a line of mammal-like reptiles different from that which gave rise to the other mammals. Nonetheless monotremes may well represent features of anatomy and development that characterized the earliest mainstream mammals.”6

Scientists initially considered the platypus to be “primitive”, but then they discovered the incredibly complex electrolocation techniques the animal uses to find food. To evolutionists this made it a “highly evolved animal and not a primitive transition between reptiles and mammals.”7

The platypus, along with its fellow monotreme, the echidna, was believed to have evolved in isolation when the land mass that would become Australia (Gondwana) broke away from the other continents supposedly 225 million years ago.8 This idea of evolution in isolation followed the theory of Darwin, whose affinity for evolution may also have been influenced by his early studies of the platypus during his time on The Beagle.9

However, the discovery in the early 1990s of three platypus teeth in South America—almost identical to fossil platypus teeth found in Australia—threw that theory upside down.10 (Marsupials, too, were once considered to be exclusive to Australia, but their fossils have now been found on every continent.) Adult living platypuses do not have teeth, but the discovery of platypus fossils in Australia had already identified that their ancestors did have teeth, which were unique and distinctive.11

In reality, there is nothing in the fossil record to indicate that the platypus was ever anything other than a platypus. It is not a living “transitional” form. It is a truly unique creature, and one that continues to baffle those who insist on making it fit into an evolutionary tree.

The skeleton of a platypus on display at a Gold Coast, Australia, exhibition of Ripley’s Believe it or Not.

One of the most amazing design features of the platypus is its bill, which has fine nerve receptors that allow it to pick up electric fields given off by shrimp and other prey.

This is particularly important for the platypus, as it hunts for its food at the murky bottom of lakes and rivers—and does so with its eyes shut.

It was once thought the animal “blundered” around on the bottom, but instead, it is actually carefully detecting prey tucked away in mud, sometimes even under rocks. The favourite food of the platypus is the freshwater shrimp. This creature generates an electric field through the flipping of its tail which the platypus can detect from 10 cm away.1

The freshwater paddlefish (or spoonbill) is another such creature that uses electro-reception. Its poorly functional eyes are of no use when it searches for its stock food, the tiny water flea. Scientists have discovered that the paddlefish’s nose (or paddle) has thousands of tiny pores that function as electro-receptors. These sensory pores extend from the paddle to the top of the head and the gill covers, occupying nearly half of the skin surface of the fish.2

The paddlefish and platypus join a catalogue of aquatic animals equipped with electro-sense. However, the platypus’s system varies slightly, in that an electric stimulus excites the nerve fibres directly, not through the use of a chemical mediator as found in some marine and freshwater fish.

In other words, there are two distinctively different electro-sensory systems of which the scientific community is aware. The possibility that evolution could produce two such effective systems requires an enormous amount of faith in blind mutations (genetic mistakes) favoured by selection. 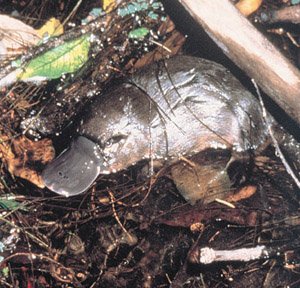