When most people hear the word skunk, their first thought is “Pew-ee!” Second is “Let’s get out of here!” Yet if you look more closely at this mild-mannered malodorous mammal, it’s easy to sense the sweet fragrance of a Designer who cares for all His creatures.

Perhaps no other animal attracts more interest than the skunk. Cute and curious, the skunk has the ability to charm people with its playful antics and yet intimidate them into hasty retreat with its potent threat. It is one of the most distinctive animals in the world, both in appearance and in, well, other ways.

So what makes the skunk’s abilities so special?

Most mammals—especially those classified as carnivores—possess scent glands. While in many cases the scent isn’t even detectable to human noses, animals will use the oil from their scent glands to mark their territory or to leave a notice to other animals that they’ve been there. For example, when your cat rubs his head against you, he’s really marking you as his with one of his scent glands. (No wonder our cats think they own us!) Some animals, like otters, also use their scent glands to condition and waterproof their fur.

But the skunk, as we all know, uses its scent in an entirely different way: as its ultimate defense mechanism.

The skunk, while it tends to get a bad rap among humans who have had unpleasant encounters with it, really does use its scent only as a last resort. After all, the supply is limited, and it must preserve its ammunition for when it really needs it. Its first line of defense is simply to walk away.

Most experienced predators will not pursue a skunk, remembering their first encounter with one.

Most experienced predators will not pursue a skunk, remembering their first encounter with one. If a young or desperate predator—or a particularly brave (or foolish) human—insists on taking a closer look, however, the skunk’s second line of defense is to twist its body, puff its tail, and stamp its front feet.

If this doesn’t work, it will then turn and point its rear end at the threat, tail high. In most cases this is warning enough. But one species, the diminutive spotted skunk, goes one step further. To make itself look larger and more intimidating, it will do a handstand on its front feet, with its tail in the air and its hind legs spread out. And while this posture is more likely to make us laugh than to scare us, predators and humans alike would do well to heed the warning. Because the next step is to spray. 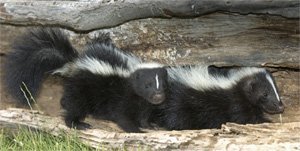 Skunks were once considered part of the weasel family but recently have been classified into their own family, called Mephitidae, meaning “stench.” © Outdoorsman | Dreamstime.com

So how did the skunk acquire such a unique ability? After all, he would hardly have needed it before Adam’s Fall, when there were no predators.

The original purpose of the skunk’s scent glands was probably the same as with any other mammal—to mark its territory and to communicate with other animals. But after the Fall, the good-natured skunk needed a way to defend itself. It is possible that our all-knowing God made the skunk with the genetic variability necessary for it to develop its strong, defensive scent over time, or He may have divinely granted the skunk its unique ability as a defense mechanism after the Curse (Genesis 3:14). However it happened, it is clear that God has equipped the skunk with what is one of the most effective defense mechanisms in nature.

So what makes skunk scent so pungent?

I Stink, Therefore I Am

Skunk scent is composed of various thiols, chemical compounds that contain sulfur. Almost all thiols have an unpleasant garlic-like odor; a type of thiol is added to natural gas to give it its distinctive smell.

In skunk scent, the thiols are particularly potent, discernible to the human nose in a mere ten parts per billion in the air. In its concentrated form, skunk scent will cause nausea, tearing, and even vomiting. That’s one powerful weapon!

Skunks are well aware of their power and even have the ability to control their weapon with amazing precision. They can aim their dual nozzles directly at their target—they aim for the eyes if they can see them—and spray in a tight stream. Or, if they can’t see their pursuer, they can spray in a vapor, leaving a foul cloud for the predator to pass through.

What a perfect defense mechanism! God has given each of His beautiful creatures the ability to live in a fallen world, and there may be no better example of His care and creativity than the cute, playful—and powerful—skunk.

Previous Article Resource Preview Next Article 10 Lessons from an Atheist