Sea Bear of the Frozen North

The polar bear is also referred to as the “white bear,” “sea bear,” and “northern bear.” An estimated 40,000 of them make their home on the southern edge of the Arctic ice cap. 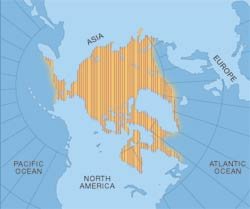 People of all ages love polar bears. These cute and cuddly-looking creatures frequently adorn Christmas cards and even sell soft drinks. But appearances can be deceiving. Known to scientists as Ursus maritimus, the polar bear is also referred to as the “white bear,” “sea bear,” and “northern bear.” An estimated 40,000 of them make their home on the southern edge of the Arctic ice cap.

As the largest land carnivore (meat-eater) in the world, the male polar bear weighs up to 1,700 pounds (771 kg) and stands 8–11 feet (2.4–3.4 m) tall, while the female is usually about half this size. A large male can hold about 150 pounds (68 kg) of food in his stomach at one time. In fact, a polar bear can eat 10% of its body weight in only 30 minutes. These bears need to store a great deal of fat to keep warm in the frozen Arctic and to sustain them when food is scarce. 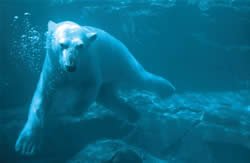 The polar bear is an excellent swimmer and sometimes travels in the water as far as 50 miles (80.5 km) or more without rest. Its large front paws are webbed and work as paddles, while the even longer back paws act as a rudder.

To maintain its hefty weight, a polar bear feeds frequently on a diet of crab, rodent, hare, caribou, fish, plants, and their favorite, seal. The bear’s amazing sense of smell—it can smell a seal up to 20 miles (32 km) away—and its 42 large teeth enable it to feed on a wide variety of food sources.

The female polar bear builds and enters her den in October, by which time she will have stored about 440 pounds (200 kg) of extra body fat for the long winter. The large store of fat provides the energy and resources to maintain the mother bear for 5–6 months and to nourish the cubs, normally born in pairs. Babies are born around November but won’t leave the den until March or April. Mother and cubs stay together for about three years while she teaches them valuable life skills and hunting techniques. A polar bear’s average lifespan is 18–22 years in the wild. 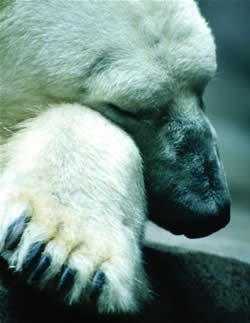 The polar bear’s paws can be 12 inches (30 cm) across. The large paws act like snowshoes, evenly distributing the bear’s weight as it moves over ice and snow. The sole of a polar bear’s foot has thick, black pads covered with small, soft papillae (bumps), which prevent the bear from slipping on the ice. Stiff hairs on their paws are great for insulation and also help with traction.

As people step back and look at these interesting and amusing creatures, many are awed. But we must realize and remember that it is God’s design that programmed the original bear kind with the ability to adapt to various climates, elevations, and food sources (these animals, however, never change into a completely different kind of animal). When you gaze on the amazing polar bear, praise God for His wonderful creation.

Previous Article When God’s Plan Hurts Next Article The Placenta