Reindeer: Thriving in a Winter Wonderland

Reindeer, with their brilliant design for navigating life in a frigid home, will go down in history.

Like the fabled team that supposedly pulls Santa Claus’ sleigh, the reindeer (Rangifer tarandus) inhabits the treacherous, frigid climes of the far North. When God created the deer kind (Cervidae) on day six of creation week, the world was perfect. But after the fall and the worldwide flood, the climate changed so that now some areas of the world are extremely frigid. Though the reindeer doesn’t fly and its nose certainly doesn’t glow like Rudolph’s in the Christmas song, God gave the reindeer some marvelous traits and instincts so it can thrive in its winter wonderland.

In Europe and Northern Asia, reindeer have been somewhat domesticated, while in North America their cousins run wild and are often called caribou. Migration patterns vary for different reindeer populations and different conditions from year to year, but the reindeer surpasses all other land mammals when it comes to migration distances. The Porcupine caribou herd, named for its calving grounds near the Porcupine River in Alaska’s Arctic National Wildlife Refuge, has been known to travel an incredible distance of 3,000 miles (4,800 km) in one year.

This annual behavior plays a critical role in the species’ survival. They travel long distances to chow down on willow, blueberry, and birch leaves, sometimes eating 9–18 pounds (4–8 kg) of vegetation a day.

On this journey, the reindeer often crosses raging rivers, frequently crowded with chunks of ice, but God has equipped it well for this athletic challenge. Its winter hair is long and hollow, acting somewhat like a lifejacket, to help it float in the water. And with broad, cloven hooves, the reindeer paddles efficiently through the water.

On land, trudging through snow and ice is a formidable task, but the reindeer has built-in snowshoes. Those broad hooves are also concave with patches of hair underneath, distributing the reindeer’s weight at an average of two pounds (1 kg) per square inch. By comparison, the moose exerts a force of eight pounds (4 kg) per square inch. This means a moose exerts four times more pressure and leaves deep prints where a reindeer might leave none. The helpful hooves distribute the reindeer’s weight not only to minimize sinking into the snow but also to provide traction on slippery surfaces. 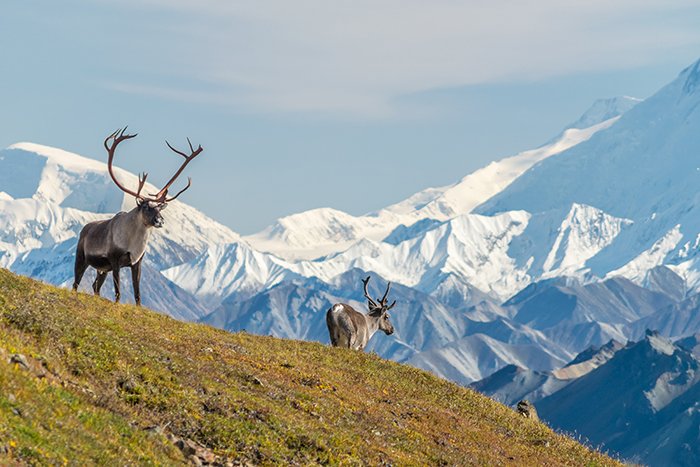 Pregnant female caribou leave their winter abode ahead of the males and hurry to their birthing grounds, while the males bring up the rear with the slower-moving year-old calves. Why all the rush? The mothers-to-be want to reach the calving grounds where predators are few. The new spring plants there enable the mothers to produce nutritious milk for their young calves. Soon after arrival, they give birth to their new progeny. The little wonders are up and running in no time—in fact, a day-old reindeer calf can outrun a human. As soon as the rest of the herd arrives, the calves will need to keep up with the herd to stay safe.

God showcases his wonders of engineering in the reindeer, from its feet all the way to its nose. Inhaling Arctic winter air directly into the lungs would kill the cells in seconds, but the reindeer’s nose can warm incoming breath by as much as 158–176º Fahrenheit (70–80º Celsius) in less than one second. The inner structure of the nose provides a large surface area which rapidly warms the air. Then, when the lungs exhale the air, the nose cools the outgoing air and dries it to prevent two critical resources from escaping: heat and moisture.

From nose to feet, the reindeer's expert design shines as a testimony to the Creator's care. The almighty Creator asked Job, “Do you observe the calving of the does?” (Job 39:1). Of course Job could not. But our omnipotent God sees and watches over all his creation. Just as he sees and feeds the birds of the air, he cares for reindeer calves born in the snowy North and equips them for their challenging environment. How much more he cares for us! 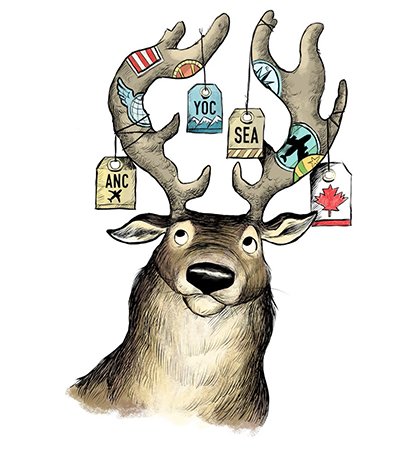 Some North American caribou migrate over 3,000 miles in a year—more than any other land mammal.

Reindeer make a clicking sound when they walk, which may help the herd stay together in blizzard conditions. The sound does not come from the mouth; rather, a tendon slips over the foot bones, making the clicks.

Reindeer are the only deer species in which females, as well as males, sport antlers. Like human fingerprints, no two reindeer antlers are exactly the same.

In the summer the reindeer's footpads become sponge-like and provide extra traction for the soft tundra. In the winter, the pads shrink and tighten, exposing the hoof rim, which cuts into the ice and snow and allows them to dig as well.

Reindeer can see short wavelengths in the ultraviolet spectrum, possibly increasing visual contrast between UV-reflective snow and UV-absorbing lichens (a favorite food) as well as the fur of wolves (potential predators). This ability may also help them decide where to step because the reflection of UV light from the snow varies based on how hard-packed or slippery the surface.

Stephanie McDorman is the Creation Museum registrar, overseeing the museum’s collections. She received her BS in biology from Milligan College. Stephanie and her husband, Perry, the museum’s naturalist, are avid outdoor enthusiasts.
Next Article Kinesins: Millions of Micro Movers