The cells in your body are bustling with a protein, called kinesin, that faithfully delivers hefty “packages” to each destination.

Every day in virtually every cell of your body, hundreds of transport motors are busy hauling freight from place to place. Scientists didn’t know anything about this sophisticated micromachinery until recently, and they’re still agog as they learn more and more.

These mighty movers, gangly proteins called kinesins, look surprisingly humanlike. One end has two arms that hold onto their cargo, and the other end has two legs that walk along the roadways inside cells, called microtubules. Each delivery person is only 2 billionths of a foot (7 nanometers) long.

These faithful couriers carry packages, called vesicles, containing needed parts, such as proteins, to specific destinations. The process of identifying the cell’s needs and sending kinesins on their merry way is as impressive as the transport vehicle itself.

Determining when and where a specific part is needed requires an incredibly sophisticated diagnostic system. It also requires keeping a catalogue of all the available parts that can be built and shipped. When new parts are needed, the cell accesses a blueprint of the needed part, orders it to be assembled and packaged, and then summons a kinesin and hands it an address. Just an address would be useless, however, without some sort of map or GPS system in the delivery vehicle. 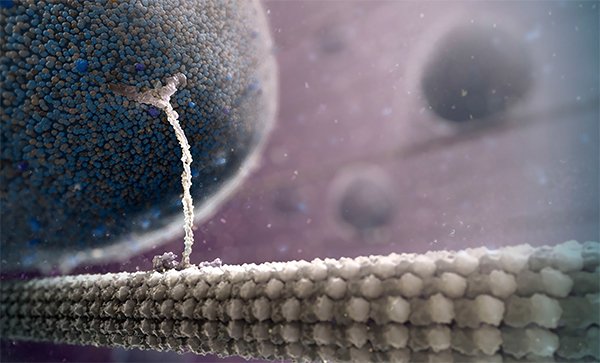 Kinesin proteins inside your cells have “legs” that can run along molecular “highways” at 100 steps per second.

Kinesins are not living things. Rather they are like biological robots that respond to commands with incredible accuracy and efficiency. Kinesins are extremely fast, moving at a rate of 100 steps per second.1 Scaled up to human size, that would equal 600 feet (200 m) per second or 400 miles (650 km) per hour. A kinesin’s motor is about 50% efficient (about twice as good as a gasoline engine), and pound for pound it produces nearly 15 times more power than most man-made engines.2

Remarkably, kinesins have a hibernation feature when not in use, similar to how modern computers go into “sleep mode” to conserve energy.3

Like runners in a relay race, kinesins sometimes hand off their cargo to a fresh worker after bringing it a certain distance. And if the cargo is too big for a one-kinesin job, multiple kinesins will join together to pull the load.4 Kinesins even have a bypass mode that allows them to navigate around obstructions.5

No Mind vs. Brilliant Minds

“It is impressive how nature manages to combine all of these functions in one molecule. In this respect it is still far superior to all the efforts of modern nanotechnology and serves as a great example to us all.”

Professor Matthias Rief of the Technical University of Munich recognizes the superior design of kinesin but gives the glory to nature instead of to the Creator.

Any scientist who could design such an incredible microtechnology would receive tremendous accolades, but in our culture committed to evolution, chance events supposedly explain such marvels. For example, Technical University of Munich professor Matthias Rief said of kinesin, “It is impressive how nature manages to combine all of these functions in one molecule. In this respect it is still far superior to all the efforts of modern nanotechnology and serves as a great example to us all.”6

Astounding! Evolution, an unproven naturalistic process with no mind directing it, can supposedly produce far more sophisticated technology than our most brilliant scientists.

Naturalists typically appeal to the concept of “deep time” and random mutations to explain how evolution could produce such marvelous constructs. Yet kinesins are in the cells of all organisms with a nucleus (like animals and plants called eukaryotes), which in the evolutionary story first appeared well over two billion years ago. If the earth is only 4.5 billion years old, that leaves too little time to evolve such incredible sophistication in animal and plant cells.

If that isn’t enough of a headache, the latest research shows that a type of kinesin appears in the supposedly simplest cells (bacteria or prokaryotes), which secular scientists believe existed at the very start of life in their deep-time framework.7,8

Common sense tells us that robots and communication devices, like smartphones, are the result of intentional intelligent design. So when we see vastly more complex mechanisms inside the so-called simplest living things on the planet, it is logical to believe what God documents in his Word, the Bible: our incredible Creator, Jesus Christ, is the mastermind who brought all living things into existence during creation week just 6,000 years ago.

Calvin Smith is the executive director and speaker for Answers in Genesis–Canada. He has spoken on creation apologetics and the message of biblical authority in churches and TV in Canada and in other countries for 15 years.
Previous Article Reindeer: Thriving in a Winter Wonderland