Primordial primate said to have scampered about the trees in ancient Montana.

Modern paleontological artistry surely puts modern forensic science to shame. From just some teeth found at Montana’s Purgatory Hill, paleontologists have known for decades that a little bushy-tailed brown squirrel-like critter1 was really the last common ancestor of primates and whatever other mammals evolved from it. They “know” it evolved around 65 million years ago, shortly after dinosaurs (the real ones, not birds) died out.

And now, having found that some previously unidentified ankle bones in a box of miscellaneous bones from the same region are the right size to go with the teeth, evolutionists assert that teeth and ankle all belonged to this squirrel-like primordial primate (called Purgatorius) and that it was a tree-dweller with flexible ankles. They believe the ankle made arboreal success possible for our ancestors.

“These fossils are the first direct evidence that shows that these primates spent most of their time in the trees following their divergence from other mammals in the earliest Paleocene.”

“This animal’s foot clearly had a wide range of motion,” explains graduate student Stephen Chester, who presented his team’s findings at the 72nd annual meeting of the Society of Vertebrate Paleontology in Raleigh, North Carolina. “This mobility would have allowed for rotating the foot in different directions as it adjusted to different angles presented by tree trunks and branches. It also shows that the first primates did not have elongated ankles that you see in many living primates today that are thought to be related to leaping behaviors.”2 Explaining the significance of the discovery, Chester says, “We really think this closes the question of where the first primates were living. The way in which the earliest primates lived has been a subject of great debate for many years, but these fossils are the first direct evidence that shows that these primates spent most of their time in the trees following their divergence from other mammals in the earliest Paleocene.”3 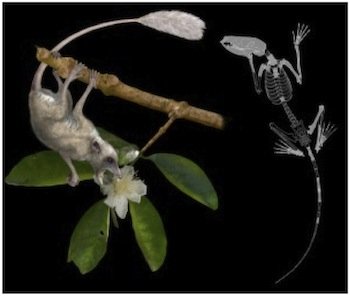 Artist’s conception of Purgatorius, said to be the earliest primate. This image appears in Nature and Discovery as well the Yale University Department of Anthropology news to illustrate evolutionists’ current knowledge of the last common ancestor of primates and some other mammals. Actually, the existence of Purgatorius and all the squirrel-like morphology in the sketch has been based only on some teeth from Montana’s Purgatory Hill. The recent discovery and analysis of some suitably-sized ankle bones from the region have now “definitively” identified the animal—already “known” to be a primordial primate—as a tree-dweller. Image credit: D. Boyer, Duke University, from www.nature.com.

Why did this animal’s evolutionary destiny lead it up into the trees? Chester’s colleague Jonathan Block says, “We think there is a connection here between primates and plant evolution, with fruits [believed to have evolved about the same time] playing a role in luring them up.” The team says that many mammals were around at that time but that these flexible ankle bones spelled “evolutionary success”4 for little Purgatorius, keeping it around until it could evolve farther up the evolutionary tree.

Incidentally, “recent phylogenetic analyses” and attempts to match Purgatorius’s teeth to characteristic teeth of placental mammals have “failed to support” its primate or placental evolutionary relationships.5 That evolutionary discrepancy seems to have escaped the notice of most, since those ankle bones have provided ancestral primates with their first real boost to arboreal life, 60 million or so years before they needed to come down and walk bipedally to complete the evolutionary story of “us.”

The story still sounds good to paleontological colleagues. “I buy it. These guys certainly know their morphology,” says paleontologist Robert Anemone from Western Michigan University. But another, Kenneth Rose of Johns Hopkins University, cautions, “The anatomy of these specimens certainly matches that of known Paleocene primates, but a skull or a full skeleton would tell us so much more.” William Clemens, whose team originally found the bones in Montana’s Garbani Channel, says, “We’ve still got an immense collection of unidentified bones to sort through,” so maybe they will yet be able to put something together. Frankly, even the assumption that the ankle bones and the teeth came from the same animal is wishful guesswork. So who knows, they might even find a brown bushy tail in the box to go with all the existing conjectures long based only on those teeth!

What they won’t find, however, is anything to prove this animal changed into a different kind of animal or that this creature is a remote ancestor of humans. Such imaginative connecting of the ancestral dots is rampant in evolutionary thinking. This creative approach to science is even easier when the desired transitional animal can be manufactured by assuming random parts belong together.

This worldview-based determination to explain life while ignoring God’s account of creation presupposes that complex creatures evolved from simple ones. In the evolutionary model, any similarity, even the features of some disembodied teeth, supposedly supports their predetermined contentions about where we came from. God left us an eyewitness account of His creative work in the Bible, from which we know He created all kinds of animals, plants, and the first humans without evolution about 6,000 years ago. He designed them to reproduce after their kinds (but with genetic potential for variation within each kind), which is what science observes them doing, rather than evolving into increasingly complex new kinds of organisms.