Acrobats of the Rain Forest

No human acrobat ever attempted the kind of superhuman feats that gibbons perform every day. It’s nothing for them to swing 50 feet through open air and turn on a dime. How? Their arms were marvelously designed to perform such tricks!

We love to watch apes at the zoo, partly because they remind us of ourselves in so many ways. In fact, somewhere near the ape enclosure, you may find a sign that says that they’re our “cousins.” But any honest person will admit that the differences between apes and humans are just as striking as the similarities.

When we take a closer look at any of the four types of ape—whether gorilla, orangutan, chimpanzee, or gibbon—we find that each has traits specifically designed to help it thrive in its special environment. The main similarity, however, is their Creator, who marvelously provided unique traits for every kind of creature.

Let’s look at just one example, the white-handed gibbon of Southeast Asia.

The gibbon was created to live in the trees, at death-defying heights. God gave gibbons three unique traits to help them—a special way of moving quickly through the trees, a distinctive shoulder that allows stunning acrobatic feats, and strong bones that can withstand terrifying falls. With these gifts, the gibbon is perfectly suited to enjoy life in the treetops.

Speeding Through the Trees

Since Adam’s fall brought a curse into the world, animals and plants have become dependent on their God-given defenses to survive. One of the gibbon’s greatest defenses is its ability to move through the trees quickly and easily. In fact, gibbons have been clocked swinging and jumping through forest treetops at speeds of 35 miles per hour (56 km/h).

How do they manage to move so fast? Not by swinging on vines like Tarzan. Gibbons swing hand over hand through the trees in a movement called brachiation. This hand-over-hand motion allows the gibbon to swing with its whole body weight propelling it forward, moving faster than animals that jump from branch to branch (like a squirrel). 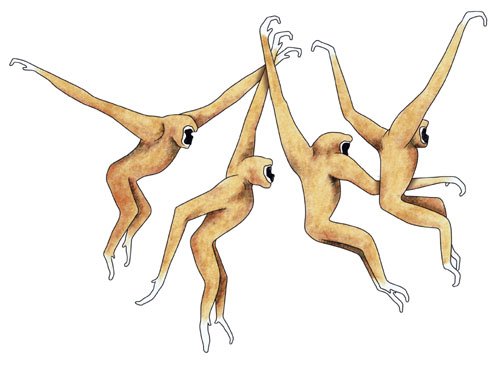 Gibbons’ handover-hand swinging motion is called brachiation. This is the same thing you’ve done if you ever swung on monkey bars, but the gibbon is designed to brachiate much more efficiently than a human being. A gibbon can swing to a branch 50 feet (15 m) away, and it can move up to 35 miles per hour (56 km/h) through the trees!

Not only does brachiation give the gibbon speed, but it also allows swings over great distances. A gibbon can swing to a branch 50 feet (15 m) away! So when a gibbon encounters a predator—a Burmese python for example—it can swing away instead of risking a fight it would probably lose.

Speed is not the only gift God gave gibbons. Gibbons are known for their amazing agility. Gibbons can not only speed through the trees but can twist and turn wildly as they go.

How can they change direction mid-swing? With their specially designed rotator cuff. A rotator cuff is the group of muscles and tendons that attach the arm to the shoulder, allowing the arm to move. A gibbon’s rotator cuff is far more flexible than a human’s—but we weren’t designed to live at the top of a tree.

This flexible rotator cuff and specially designed blood vessels allow the gibbon to hang from one arm and spin completely around—a full 360 degrees. If you tried that, your arm would fall clean off. (But you probably don’t have to hold your hands above your head for balance or to keep from dragging them on the ground when you walk, like the gibbon does.)

The gibbons’ design allows them to change direction suddenly while swinging through the forest. Not only does this help them give predators the slip, but it also makes playtime more fun for youngsters.

Even the greatest acrobat slips sometimes, and gibbons are no different. Falling 30 feet (9 m) without a net can be life-threatening to a human acrobat, but when you live and play between 75 and 200 feet (22–60 m) above the ground, falling is a constant danger.

Should the gibbon find itself falling, it can catch a branch with its “feet” just as easily as with its hands.

Gibbon bones are thicker than ours, which protects them somewhat. But fractures are still a danger. Their main protection is their superb flexibility. Gibbons actually have four “hands” and no feet at all. The extra pair of hands allows them to hang from their legs and move around easily while upside down. Should the gibbon find itself falling, it can catch a branch with its “feet” just as easily as with its hands.

With all these amazing abilities, it is hard to imagine what a gibbon can’t do. However, as incredible as their skills are, gibbons are still only animals. They can only ever experience this broken world through their five senses, during a short life.

On the other hand, humans can meditate on their eternal future and experience the healing grace that comes from Jesus Christ. That is a vast difference between mankind and gibbons, and no amount of physical similarity can ever bridge that gap.