Easing Out of Hammocks

Evolutionary anthropologists presume apelike ancestors had to learn to walk upright to become human, but once they stopped hanging out in trees they had to change their sleeping arrangements. “It has long been believed that coming down from the trees was a crucial evolutionary shift,” says Cambridge anthropologist Kathelijne Koops. She led a team studying the unusual nesting behavior of chimpanzees in the Nimba Mountains of Guinea, West Africa, to discover whether those apelike ancestors slept in trees or on the ground.

All great apes build some sort of nest, typically by interweaving tree branches. Gorillas build on the ground, but orangutans and chimps build mostly in trees. A separate study of orangutan nests reports these one-time-use engineering marvels are made from bent branches. According to author A. Roland Ennos, “It’s very similar to weaving a basket, they have to break the branches, weave them together and form a nice, strong, rigid structure. . . . They are almost as complex as a man-made shelter you might make. They [the orangutans] know how the wood is going to break, and they have a feel for how strong they have to make it (the nest). That shows the apes have intelligence and have a feel for the physics of their environment.”1

Some chimps in the Nimba Mountains build around 20% of their nests on the ground. (Normally over 95% of chimp nests are arboreal.) Koop and company went to Guinea’s Seringbara forest to discover why. They hoped to learn whether the earliest humans had already made the transition to ground-based snoozing before they evolved or had to develop their modern nocturnal habits later.

“We believe that, like modern apes, the common ancestor of chimpanzees and humans also slept in the trees 6 million years ago,” said Dr. Koops. “However, these nests are not preserved in the fossil or archaeological record, so it is impossible to study directly the ancient transition from sleeping in trees to building shelters on the ground. Recording this rare behaviour in the chimpanzee, our closest relative, may provide vital clues.” 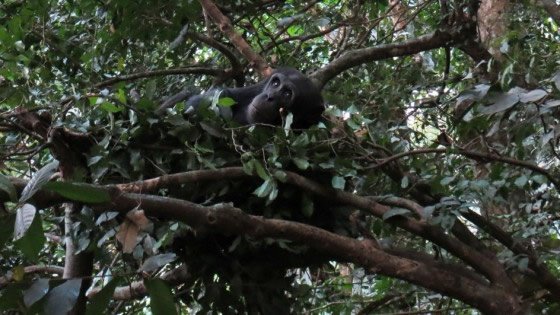 Similar chimps in the Congo build nests on the ground despite the prevalence of leopards,2 so lack of predators doesn’t explain the cavalier camping behavior. Some evolutionary anthropologists have speculated early humans learned to ward off predators with fire to get a good night’s sleep, but these researchers discount this explanation for ground sleeping since they reckon the earliest controlled use of fire occurred 1 million years ago, almost a million years too late to keep the night beasties away from the most primitive humans (evolutionarily speaking), Homo erectus.3

Noting that there are plenty of trees available in Seringbara, Koop wondered if ground nests belonged to males guarding females in the trees above. However, DNA testing of hairs found in 46 ground-based nests and 7 nearby nests in the lower tree branches showed that while the majority of the ground nests were built by males, they were not necessarily associated with female nests above.

“These chimpanzees offer a rare opportunity to investigate why a population of wild apes chooses to sleep on the ground,” Koops explains. “We showed that ground-nesting was not caused by male mate-guarding behaviour, a lack of trees in which to nest, or because of fire. This suggests that our direct ancestors were neither the only, nor the first, species to come down from the trees. . . . This chimpanzees’ behaviour suggests a more deep-seated, gradual transition from tree-to-ground sleep.” The 46 ground nests examined belonged to only 12 individuals, indicating the ground preference was habitual. Koop’s team concludes, “We showed that terrestriality is not a necessary condition for habitual ground-nesting, which raises the possibility that ground sleep may have been practiced in some populations of pre-erectus humans.”4 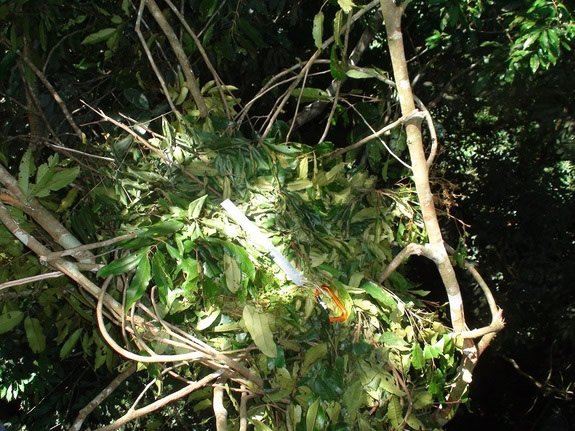 Since the male-built ground nests apparently do not represent an early evolution of chivalry, the researchers suggest the males, being heavier, are at greater risk for a branch-breaking rude awakening.5 Expanding on the liberating concept that hominins stepped out of the trees without the need for a night-light, Colorado evolutionary anthropologist Thomas Wynn, commenting on the study, suggests the transition from hammock to pallet allowed our distant ancestors to get more REM sleep “which he says is important for memory consolidation and cognition.”6 Carol Ward, a Missouri evolutionary anatomist, explains that “a common feature of REM sleep is muscle paralysis, which make it precarious for apes that sleep in trees.”7 However, she adds that there are “too many differences between chimps and early hominins to draw firm conclusions about early human behavior from chimp studies.”8

Dr. Ward, an evolutionist, notes that all of these conclusions are speculative.9 We would go a step further and say “imaginative.” This entire scenario is based on the assumption that humans evolved from ape-like ancestors. Yet so-called hominin fossils are either ape or human, not transitional creatures. And just as neither bipedality nor cooked food gave a non-human creature the leg-up to become human, neither did the ability to sack out on the ground.

Biblically we know that God created animals (including apes) and humans as separate creations on the 6th day of Creation week. God made humans in His image with unique mental and spiritual attributes. And while our Common Designer gave humans and apes certain similar physical features, He also created many distinct physical differences (not to mention a huge gap in intelligence and a different spiritual nature). Nothing in the fossil record or genetics confirms humans evolved from ape-like ancestors. Whether chimps sleep on the ground or not tells us nothing about human ancestry.