Low-Octane Tanks of the African Plain

One reason rhinos rule the African plain has nothing to do with their horns or size. They’ve made a contract with unseen technicians who convert local rubbish into high-grade fuel.

Unicorns in the Bible—is that even possible? Well, if you picture prancing, pointy-horned ponies romping in the roses, definitely not. However, you might be surprised to learn that a modern living animal is a much better fit for the powerful, savage beast described in the book of Job—the rhinoceros.

As adults, these thick-skinned brutes don’t have any natural enemies. You might think it’s their horns that keep lions at bay, but in reality it’s their sheer size, speed, and nasty bite. The white rhinoceros is the third-biggest land mammal, weighing in at a hefty 4000–6000 pounds (1800–2700 kg)!

But the secret to rhinos’ success is not so much their strength and ferocity or pointed nose. Oddly, this formidable tank runs on low-quality fuel that many other plant-eaters can’t eat. It depends on some of God’s smallest creatures to survive on this low-carb veggie diet.

First, a Word About That Nose

But first, a quick word about that big horn, since you’re probably wondering. The rhino horn is made of a dense material called keratin (the same material in your hair and fingernails). But technically it’s not a true “horn.” Unlike true horns on cattle or antelopes, the rhinoceros “horn” does not have a bone core and is not attached to the skull.

Most animals’ horns come in pairs, and three species of rhinos have two horns aligned front-to-back down the snout. Rhinos use these horns primarily in contests over mates and territory, like the creatures identified in Job 39.

We Need Each Other

Rhinos are herbivores and are well designed to eat plants many animals can’t eat. A big part of that design is the rhino’s crucial relationship with a tiny life-giver—bacteria. Were it not for the Creator’s system of integrated and cooperative microbes and organs, the rhino could not exist. Since God is a relational God (Luke 3:21–22; John 3:16), we should expect to see such mutually beneficial relationships everywhere in His creation. And guess what—we do!

By itself, the rhino can’t access essential nutrients in plants. The problem is that plant cells have resilient walls made of a very tough molecule called cellulose. Rhinos simply don’t have the tools to break it down, but bacteria do, an enzyme called cellulase.

So they work together. Rhinos provide a place for bacteria to live. In fact, they supply two homes. One, the caecum, is located just after the small intestine. Bacteria also live in the colon—the last stop in the digestive system.

Many microbes make themselves at home in the caecum, where the rhinoceros supplies them with plenty of food.

The bacteria pay the rent by providing nourishment. As bacteria process cellulose, they make important nutrients such as sugars, B vitamins, and essential amino acids not easily obtained from the plants. Bacteria then live off these nutrients.

At first glance it seems the rhino can’t benefit from the nutrients the bacteria have manufactured. They’re headed straight to the colon for elimination. What a waste!

Well, all is not as it seems. Peristaltic movements seem to be reversible. Apparently, reverse peristalsis transports dead bacteria and nutrients back into the small intestine, where they can be digested and absorbed.

This relationship with bacteria allows rhinos to consume low-quality food faster and extract more nutrients than other herbivores, such as deer, can. As a result, rhinos thrive in habitats with poor-quality foods—such as arid environments with few plants, many of which are poisonous—where grasseaters and other herbivores would struggle.

This marvelous system is a good example of very different organisms working together as one. Even the mighty rhinoceros depends on lowly bacteria for its survival. Its horns and thick hide may make for a great show, but the important work takes place in its gut. 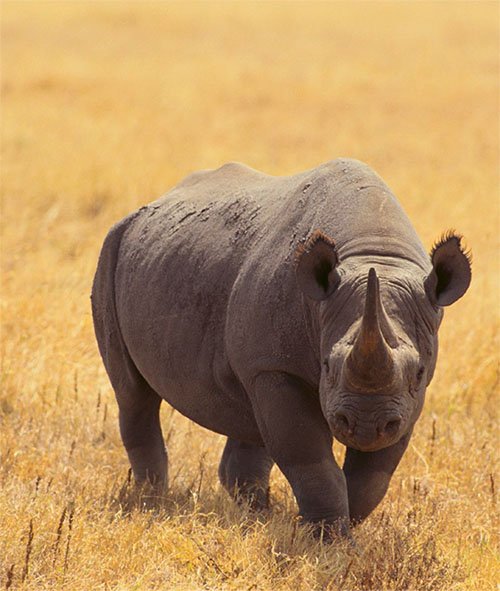 Their relationship with bacteria allows rhinos to consume low-quality food and extract more nutrients than other herbivores.

Tom Hennigan is associate professor of biology at Truett- McConnell College, where he teaches organism biology and ecology. He is co-author of the newest edition of the Wonders of Creation series, The Ecology Book.
Next Article Joint Effort