A harmless joke, a substantial misunderstanding, or a sacrilegious quasi-caricature of the one true God?

The Flying Spaghetti Monster, a satire on intelligent design and creation, reveals more than irreverence.

The image is familiar: on the left, the reclining Adam, arm extended casually toward a bearded, robed figure on the right surrounded by an angelic host: Michaelangelo’s The Creation of Adam, a fresco on the ceiling of the Sistine Chapel. 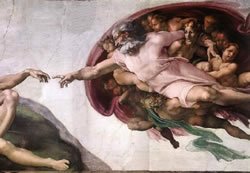 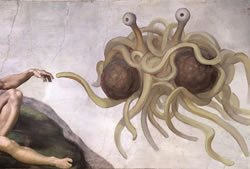 Claiming authenticity, the church supposedly stepped out of thousands of years of secret existence in 2005, when Bobby Henderson, a bachelor’s graduate of Oregon State University’s physics program, sent an open letter to the Kansas school board protesting a decision (since overturned) that allowed some critical analysis of evolution (though not specifically requiring any discussion of intelligent design). In the letter, Henderson wrote:

Some find that hard to believe, so it may be helpful to tell you a little more about our beliefs. We have evidence that a Flying Spaghetti Monster created the universe. None of us, of course, were around to see it, but we have written accounts of it. We have several lengthy volumes explaining all details of His power. Also, you may be surprised to hear that there are over 10 million of us, and growing.

The letter concludes, “I think we can all look forward to the time when these three theories are given equal time in our science classrooms across the country, and eventually the world; One third time for Intelligent Design, one third time for Flying Spaghetti Monsterism, and one third time for logical conjecture based on overwhelming observable evidence.”

Let’s analogize it this way: an investigator and his attaché enter an abandoned warehouse where strange noises have been reported. They carefully examine the evidence before their eyes: a dizzying maze of wires, circuits, microprocessors, and computer cables, along with a large computer monitor and keyboard. Lying beside the contraption are technical schematics and various computer tools. The investigator, examining the plain evidence before him, deduces the obvious: someone has built a supercomputer! Now imagine the dialog that might ensue, with the investigator a stand-in for the Intelligent Design Movement and his sidekick a stand-in for Pastafarians:

Investigator: Just look at this contraption, Datson: miles of wiring and acres of circuitry, programming manuals strewn about the floor—it’s obvious that someone is building a large computer. But whom, and why?

Sidekick: How can you possibly determine that this computer was built by someone without knowing who the builder actually was? Based on what you suppose from this scene, could it not have been a large Caesar salad that designed this device?

Quite obviously, the sidekick’s reasoning skills are wanting: one can establish that certain designs require (or, at least, strongly suggest) a designer without knowing the identity of that designer. The key point of the Intelligent Design Movement has been to bring light to the many signs of design in life—signs that point to a designer—without making attempts to establish who (or what) that designer (or designers) is (or was).

Design, yes, but how do we know the Designer?

Friend of computer scientist: Sirs, I appreciate your analysis of this laboratory, but I believe you are both overlooking something rather important. Here is the complete instruction manual written by the computer’s creator—a manual that describes why, how, and when the computer was designed and built! The manual accurately describes everything you see in front of you and more! The computer’s creator has merely gone out to buy more parts at the moment.

In other words, young-earth creationists view the evidence in light of God’s revelation to us; in reality, Darwinists and intelligent design advocates also view the evidence through their own unproven presuppositions about the way the world works.

A Sacrilegious Quasi-caricature of the One True God?

To understand not only creation, but also sin, death, and salvation, people need the special revelation of the Bible.

Although our comments up to this point have been in defense of the Intelligent Design Movement, we recognize that the source of the Flying Spaghetti Monster satire is that the Intelligent Design Movement does not identify a designer due to its bottom-up, evidence-oriented look at biology. This appeal is supposed to insulate intelligent design from religious status, allowing it to be presented in public schools (though this strategy has been judicially stymied so far). Intelligent design leaves unclear not only who the designer is, but also why we are here at all. To understand not only creation, but also sin, death, and salvation, people need the special revelation of the Bible—not just the general revelation around us that implies a designer. We know who God is because He told us in His Word, revealing not only that He created us, but also revealing elements of His nature. Be sure to read more on this topic at The Intelligent Design Movement.

Furthermore, atheists, agnostics, and evolutionists (pardon the overlap) carry their own unanswered questions, such as: Where did the universe come from? How could life originate from abiotic chemicals? What explains the earth’s privileged location in the galaxy?

We are not worried that Flying Spaghetti Monsterism is going to lure away Christians; rather, the religion’s obvious primary purpose is sardonic humor. Nevertheless, it reflects a growing attitude of mockery toward not just organized religion, but also toward any suggestion that there is something—or Someone—“out there,” beyond ourselves and our fallen notions.