Plants for the “Prehistoric” Palate

Purportedly prehistoric people chose their veggies wisely even before they took up farming, archaeologists say.

Tartar scraped from the teeth of people in Stone Age Sudanese cemeteries spanning several cultural periods shows that ancient folks at Al Khiday—even those who did not farm—made intelligent use of local botanical resources. The proof is in their plaque! Glad the people did not floss, archaeological researchers hope “to counterbalance the dominant focus on meat and protein that has been a feature of pre-agricultural dietary interpretation, up until now.”1

Al Khiday, near the Nile River in Central Sudan, contains five archaeological sites with burial grounds representing three cultures: one without evidence of agriculture, another with evidence of some agricultural development, and a more recent one suggesting a well-developed agricultural economy.2 In the context of biblical history, the oldest would be consistent with people descended from those dispersed from the Tower of Babel. The most recent of the civilizations represented, centered at the nearby city of Meroë, flourished from about 800 BC until about AD 350.

The teeth from Al Khiday make possible dietary comparisons spanning a few thousand years in the same region. Donatella Usai, coauthor of the comparative study published in PLoS ONE, explains, “Al Khiday is a unique site in the Nile valley, where a large population lived for many thousands of years. This study demonstrates that they made good use of the locally available wild plant as food, as raw materials, and possibly even as medicine.” 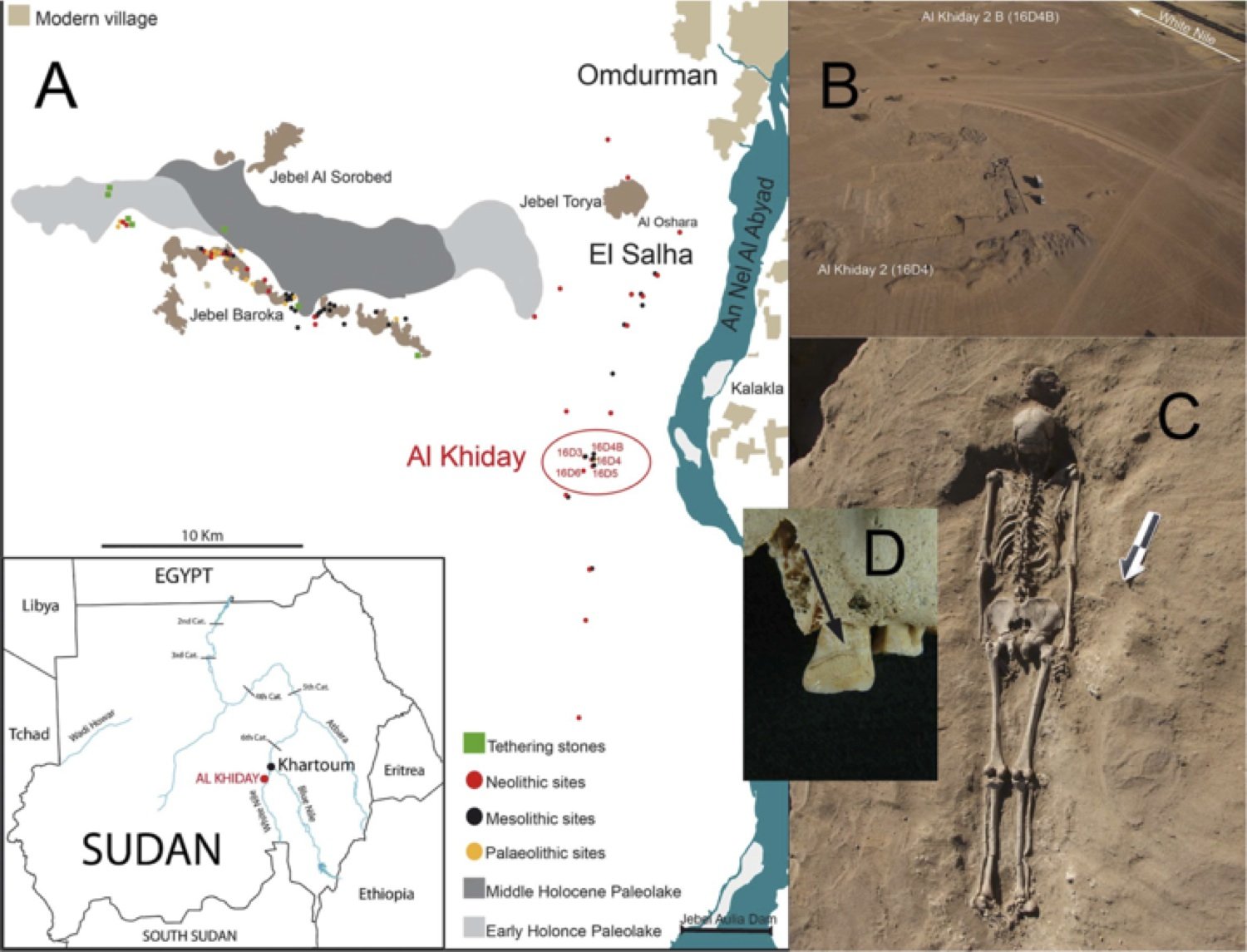 Al Khiday in Central Sudan is a group of five archaeological sites near the Nile River. These sites include several burial grounds. Archaeologists study the chemicals and microfossils of plant materials in tooth plaque (arrow in D) to determine what people buried there ate. Image by Stephen Buckley et al., via PLoS ONE.3

Purple Nut Sedge in the Plaque

To find out what these ancient people ate, archaeologists examined microfossils and assayed chemical compounds embedded in dental calculus of people in the cemeteries. Starch granules and essential oils matching those in purple nut sedge were found in all the groups. “The evidence for purple nut sedge was very clear in samples from all the time periods we looked at,” says Stephen Buckley of the University of York. “This plant was evidently important to the people of Al Khiday, even after agricultural plants had been introduced.”

Plant fibers were embedded in dental calculus. These fibers in addition to wear patterns on the teeth varying from one cultural group to the next suggest the people used their teeth to soften the pithy fibers of purple nut sedge or other plants to make them workable. Many modern aboriginal people have used this process to make fibers pliable for basket-weaving or other uses. No actual baskets were found in the sites. Archaeologists hope however that further investigation might reveal more about how the peoples of Al Khiday utilized plant fibers in their daily lives.4

The people of Al Khiday, even the pre-agrarian ones, evidently went to great effort to harvest the tubers of the purple nut sedge—a time-consuming process.6 They cooked these and other plants, including nutritious grasses. They apparently also valued plant fibers as a non-nutritive resource, further “suggesting broad ecological knowledge,”7 archaeologists say, much broader than what evolutionary anthropologists usually attribute to “pre-agrarian” people.

That people were doing all this even before agriculture became established in the region is a surprise to many. It challenges the popular view among secular anthropologists that agriculture developed as humans evolved greater intelligence. Pre-agrarian people are often seen as lacking both the skill and foresight for agricultural pursuits and consequently largely dependent on meat or fish for sustenance.

There is certainly no biblical reason to suppose that either the farmer or the hunter-gatherer would be the intellectual superior of the other.

Purple nut sedges—which are today regarded with disdain because their spreading underground tubers make them so difficult to eradicate—were in evidence on teeth from all the cultural periods. The stubborn spreading properties that make the purple nut sedge one of the most difficult to eradicate weeds today made it a hardy and ubiquitous botanical resource for these ancient people.

Purple nut sedge tubers are a carbohydrate-rich source of the essential amino acid lysine. “By extracting material from samples of ancient dental calculus,” explains lead author Karen Hardy, “we have found that rather than being a nuisance in the past, its value as a food, and possibly its abundant medicinal qualities were known.”

Purple nut sedge inhibits the growth of Streptococcus mutans, a bacterium associated with tooth decay. Whether the people of the region realized that use for this plant is unknown at this time. However, cavities are rare in the teeth of the people buried at Al Khiday, quite probably due to the plants popularity as a food or at least as a substance to be chewed.

“More recently, [purple nut sedge] was also used by the ancient Egyptians as perfume and as medicine,” Hardy explains. “We also discovered that these people ate several other plants and we found traces of smoke, evidence for cooking, and for chewing plant fibres to prepare raw materials. These small biographical details add to the growing evidence that prehistoric people had a detailed understanding of plants long before the development of agriculture.” 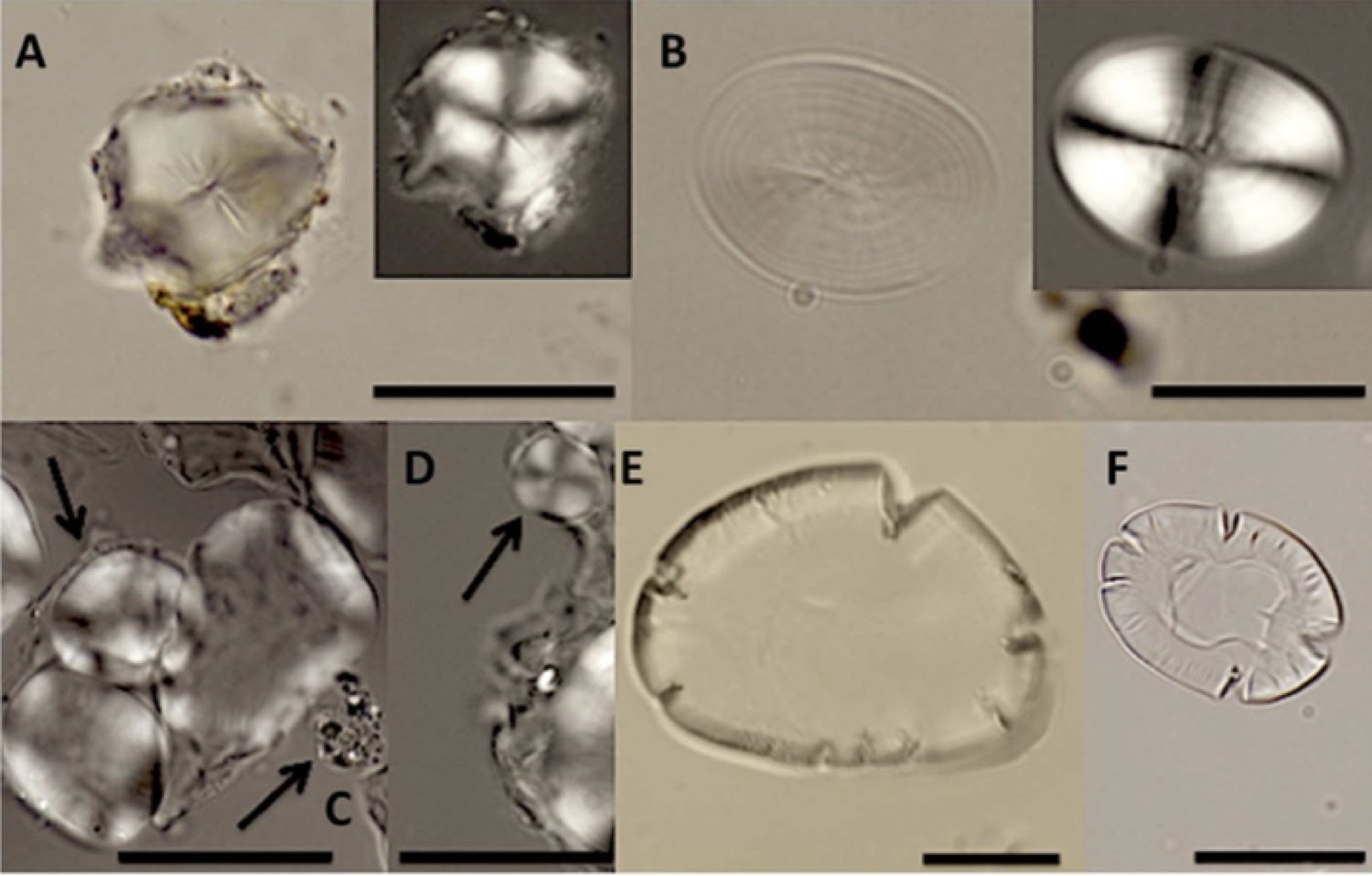 These are some starch granules extracted from tooth tartar at Al Khiday. Different shapes are shown here: polyhedral (A) consistent with purple nut sedge, oval (B and C), and round (D, arrow). Additionally, starch granules in C are swollen, suggesting they were boiled. (Arrows in C show an additional starch granule, left, and a bit of dirt, right.) Cracked starch granules (in E and F) probably came from food that was dry roasted. Image by Stephen Buckley et al., via PLoS ONE.8

The Biblical History of Agriculture

The notion that pre-agrarian ancient people knew how to intelligently choose, collect, and process plants as both foods and raw materials, cook their veggies, and incorporate plant materials into their diets runs counter to the common view that before farming people were ignorant of the uses of plants. Hardy says, “The new access to plants ingested, which is provided by dental calculus analysis, will increase, if not revolutionise, the perception of ecological knowledge and use of plants among earlier prehistoric and pre-agrarian populations.”

But Bible-believers should already know that people did not have to evolve the intelligence to grow their food. Historically, agriculture long preceded hunting!

Not only did man begin his life-beyond-Eden as a tiller of the ground (Genesis 3:17–18), but after the global Flood, farming began right away. Noah planted a vineyard (Genesis 9:20)! In the post-Flood years, following the dispersion from the Tower of Babel, hunting and gathering likely became a prominent part of many cultures as people migrated, lost agricultural expertise, and had to learn to grow crops in their new locales. Often it is easier to survive as hunters and gatherers in an undeveloped land before establishing an agricultural base. Thus it is no surprise that archaeological evidence of agricultural pursuits is not seen in the earliest so-called Stone Age sites. There is certainly no biblical reason to suppose that either the farmer or the hunter-gatherer would be the intellectual superior of the other, nor any reason to assume that ancient people were ignorant of the ways to eat and utilize plants, whether cultivated or gathered! What we’ve seen in this study is an example of people descended from those who dispersed from Babel, people who had the intelligence to exploit their environment’s resources to meet their needs.