This spring is your last chance to see Lucy in the United States before she returns to her homeland.

After resting four years in storage in Houston, Lucy’s Legacy: The Hidden Treasures of Ethiopia has opened at the Bowers Museum in Santa Ana, California, where Lucy will remain through April 28. Reflecting the evolutionary claim that Lucy is an ancient ancestor of humans, museum president Peter Keller says, “When you get down to the basics of human origins, there's no more important piece than the oldest complete human, or human ancestry remains, than Lucy.”1

Lucy is our icon. She helps build the image of our country. It's very good in terms of trade, investment and tourism.

Lucy will be returning to the National Museum of Ethiopia in Addis Ababa, her premiere there being planned to coincide with the May meeting of the African Union. “Lucy is our ambassador of good will,” says Amin Abdulkadir, Ethiopia's minister of culture and tourism. “Lucy is our icon. She helps build the image of our country. It's very good in terms of trade, investment and tourism.”

Named after the Beatles song “Lucy in the Sky with Diamonds,” Lucy has certainly had a glittering career since her bones were unearthed in 1974. Lucy is promoted as the best evidence of a transitional form between humans and presumed evolutionary ape-like ancestors. With a fairly typical ape’s head, most evolutionists depict Lucy as more human-like from the neck down, claiming she walked upright on two legs. As a result, most museum displays—including Bowers of course—include a somewhat hairy individual full of personality strolling comfortably through human history on two legs. But what is the real story? 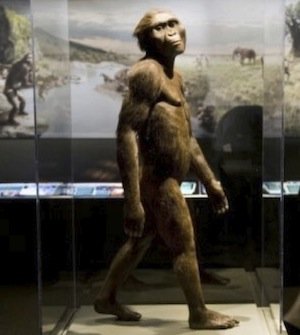 This model of Lucy at the Bowers Museum perpetuates the anatomically unsupported notion that the extinct ape known as “Lucy” could walk with an ordinary upright bipedal gait. Image credit: H. Lorren Au Jr., Orange County Register through www.ocregister.com 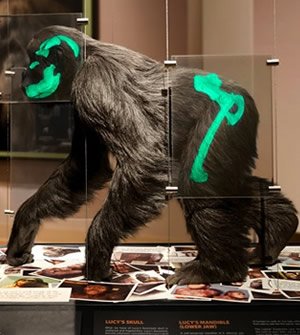 This model of Lucy at the Creation Museum in Petersburg, Kentucky, includes holographic images of the fossil bones that demonstrate the unfitness of her pelvis for upright locomotion. Image credit: Chris Neville (Creation Museum)

As we discuss in detail in “A Look at Lucy’s Legacy” and “Lucy, the Knuckle-Walking “Abomination”?” Lucy’s anatomy is consistent with that of an extinct ape. Yet evolutionary determination to document transitioning progress from ape-like ancestors to us has tried to explain away her anatomical fitness for swinging through trees as evidence that evolution kept her options open. Lucy’s popularizers generally ignore evidence that the anatomy of her upper extremities strongly suggests she was a knuckle-walker.2 Furthermore, her pelvic anatomy precludes the comfortable upright walking shown in the Bowers Museum model. In fact, the best so-called evidence for Lucy’s bipedality comes from a set of human-looking footprints not even associated with her fossils. They were found roughly 1000 miles away from the site of Lucy’s discovery.

So what is Lucy’s real legacy? Lucy popularized for the public the idea that man evolved from an ape-like ancestor—one with a cute and memorable name. An iconic figure, she is imprinted on the minds of adults and children who may not be taught to see the numerous unverifiable assumptions on which evolutionary claims about her are based. Not learning to discern, many will go home from the exhibit thinking they have had a peek into humanity’s past and fail to realize that they have only seen an ape dressed up to tell a story at odds with the true story of our origins. In choosing whom to believe, each person really must decide whether to uncritically accept the insupportable claims of historical evolutionary science or our Creator’s account of our origins in the book of Genesis.

Despite the claims of evolutionists, the Bible’s account is not at odds with observable scientific principles, such as the fact that living things reproduce after their kinds and have never been observed evolving into new more complex kinds of creatures. And the biblical account has an added “advantage”: it came from the only eyewitness available, God Himself. So, whose word will you accept?