Lucy in the Trees

Lucy was a real swinger.

To support their contention that ape-like ancestors became human because they learned to walk upright, evolutionists would like to bring Lucy down from the trees. But paleoanthropologists David Green and Zeresenay Alemseged have determined Lucy’s cousins retained their anatomical equipment for swinging through the forest and therefore likely did just that.

“The question as to whether Australopithecus afarensis was strictly bipedal or if they also climbed trees has been intensely debated for more than 30 years,” Green explains. “These remarkable fossils provide strong evidence that these individuals were still climbing at this stage in human evolution.”

Australopithecus afarensis, of which the most well known specimen is “Lucy,” is an extinct ape widely accepted among evolutionists as a human ancestor that was acquiring features useful to a proto-human.

Some evolutionists, zealous to depict Lucy as bipedal, get offended at the Creation Museum’s anatomically correct reconstruction depicting her as a knuckle-walker and even ignore the evidence presented by other evolutionists that her wrists were well suited to supporting her weight. If Lucy and her cousins could be shown to have abandoned the trees, so much the better. Of course, evolutionary thinking always has a way to adapt to any data. So, since the latest data leaves the afarensis family flying through the air with the greatest of ease, that’s okay too. 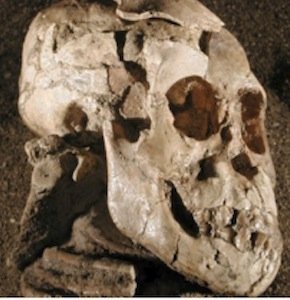 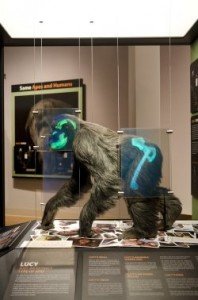 Selam, meet your older cousin Lucy (right). “Selam” (left) is a female Australopithecus afarensis juvenile unearthed in 2000 in Dikika, Ethiopia, by Zeray Alemseged. The Dikika Research Project has spent eleven years carefully freeing her shoulder blades from their rocky enclosure. Because subtle changes do occur in the shoulder blades as individuals mature, the researchers compared both juvenile and adult specimens and determined the differences did not alter their conclusion that Selam’s shoulder has an ape-like construction. “When looking at how we became human, an important moment in our history was abandoning a lifestyle in the trees, and when that happened is a big question,” Alemseged says. “This study moves us a step closer toward answering the question 'When did our ancestors abandon climbing behavior?’ It appears that this happened much later than many researchers have previously suggested.” Image on left from Zeray Alemseged / Dikika Research Project through www.foxnews.com. Image on right from Creation Museum’s “Starting Points” room, as reproduced in “Lucy, the Knuckle-Walking “Abomination”?.”

Alemseged discovered a female juvenile Au. afarensis fossil, nicknamed “Selam,” in 2000. “Before DIK-1-1’s discovery,” he and Green write, ”the limited number of fossil scapulae [shoulder blades] provided only tentative clues that the australopith shoulder was apelike.”1 “Because shoulder blades are paper-thin, they rarely fossilize, and when they do, they are almost always fragmentary,” Alemseged says. “So finding both shoulder blades completely intact and attached to a skeleton of a known and pivotal species was like hitting the jackpot.” By examining them, the researchers have determined that Selam, just like modern apes, was well-equipped for climbing. 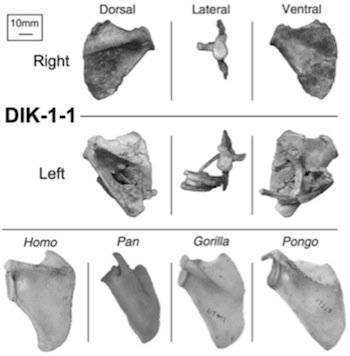 Selam’s australopithecine shoulder blades are shown in the top two rows labeled DIK-1-1. Below are shoulder blades from a modern human, chimpanzee, gorilla, and orangutan. The “socket” faces laterally in the human and more upward in all the apes, including Selam. The scapular spine, a bony ridge for muscle attachment along the back surface of the shoulder blade, is more horizontal in the human and angled obliquely upward in all the apes, including Selam. The australopithecine shoulder is built like that of modern apes and presumably functioned the same, distributing the stress of the animal’s weight over the entire shoulder joint capsule as it swung through the trees. Image from Green and Alemseged, via www.sciencemag.org.

The shoulder has a ball-and-socket joint that provides excellent range of motion. Thanks to this joint, both humans and apes can raise their arms above their heads. In humans, the socket (glenoid fossa) is pointed to the side. But in apes, the socket is oriented more upwards, a helpful arrangement for animals that regularly dangle their body weight from their shoulders.

“The scapulae of the African apes, and to a lesser extent, Pongo [orangutans], differ from those of Homo [humans] in possessing more cranially oriented glenoid fossae, which may be an adaptation to more effectively distribute strain over the joint capsule during climbing and reaching when the upper limb is loaded.”2 Also, on the back of the scapula, the spine, a bony ridge to which muscles like the trapezius attach, is closer to the horizontal in humans, but “Suspensory great apes also possess obliquely oriented scapular spines.”3 (See the illustration.)

Green and Alemseged compared Selam’s shoulder blades to those of juvenile and adult australopithecines (afarensis and africanus), gorillas, chimpanzees, orangutans, Homo erectus, Homo floresiensis, and modern humans. Both sorts of extinct humans (H. erectus and H. floresiensis) had laterally facing sockets and the more or less horizontal scapular spines typical of modern humans.4 Selam’s shoulder blades, however, were in all ways ape-like and most closely matched the gorilla.5

“The apelike appearance of the most complete A. afarensis scapulae [i.e. Selam’s] strengthens the hypothesis that these hominins participated in a behavioral strategy that incorporated a considerable amount of arboreal behaviors in addition to bipedal locomotion,” they conclude.6 “This new find confirms the pivotal place that Lucy and Selam's species occupies in human evolution,” Alemseged says. “While bipedal like humans, A. afarensis was still a capable climber. Though not fully human, A. afarensis was clearly on its way.”

What is clear, actually, is that the evolutionists have found additional anatomical evidence that Australopithecus afarensis was just an ape. Nothing about the results screams “human” or “human-in-the-making” but only “ape.” Scooting australopithecines along the evolutionary path to “human-hood” is a job for the evolutionary imagination. But if Lucy and Selam were not extinct, they’d just be another exhibit in the ape section of the zoo. God created apes and humans on the same day about 6,000 years ago. Humans did not evolve from ape-like predecessors.