The latest questions about human evolution illustrate how the evolutionary worldview blinds its believers to what should be obvious. In an attempt to prove that the creature known as Australopithecus sediba is the oldest human ancestor, discoverer Lee Berger’s team invented an awkward, joint-straining “sashaying” walk for it.* Yet numerous anatomical features indicate sediba could not have walked upright on two legs, so a more reasonable interpretation is that sediba is simply an extinct ape.

Meanwhile, other evolutionists continue to puzzle over the origin of “hobbits”—small humans with the designation Homo floresiensis. These tiny extinct humans were found on the Indonesian island Flores, along with advanced cutting tools and the bones of dwarf elephants. Researchers debate how people with brains the size of a chimp’s “evolved” from Java’s Homo erectus, whose brain was twice as large. 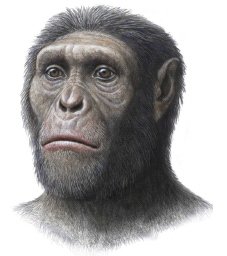 Some scientists continue to try to make Australopithecus sediba (above) into more than an extinct ape.

But we need no million-year scenario to see how an isolated island population, descended from Tower of Babel immigrants, could display unusual traits (such as extreme dwarfism and disproportionate limbs). Again, other more reasonable interpretations are available. For example, genetic predispositions within a limited gene pool, possibly influenced by disease or nutritional deficiency, can cause rapid changes. The dwarf elephant bones found on the island also point to this common phenomenon on islands where food is relatively scarce.

Yet people were still people, and elephants still elephants. There are no apemen, just varieties of apes, elephants, and humans—all descended from the ones God created about 6,000 years ago.