The effort to fill in the gaps between apelike ancestors and modern humans continues to produce some interesting stories.

The researchers videotaped a little girl for one hour per month from age 8½ months until she was nearly 2 years old. They compared these videos with video footage of a chimp and a bonobo (a similar species sometimes called the “pygmy chimp”) being raised in a “language enriched environment.” Believing apes still possess some linguistic capacity, they trained the apes to recognize symbols, called lexigrams, hoping they could then learn to “speak”—that is, to come to use the symbols more than gestures as their “language” skill grew. 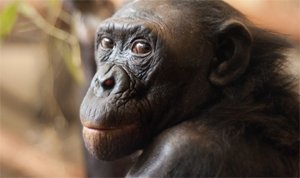 Apes trained to “speak” with symbols made little progress in learning “language,” compared to a human child.

The child and apes did use some common gestures to communicate, but in addition to using a rich repertoire of unique gestures, the child actually learned to talk. The apes, on the other hand, failed to make significant progress with their lexigram language and continued to prefer gestures over symbols. Despite claims that these all-star apes unveiled the evolutionary history of language, their performance was actually a disappointment.

From the moment they came into existence, Adam and Eve were able to speak with each other and their Creator. Adam named the animals and poetically declared his admiration for Eve. Language is God’s creation, a gift to humans, who alone are made in His image.

In related news, the latest alleged “missing link” is the palm-sized primate Archicebus achilles. Because its foot combines features found in primates that are purported to be on different evolutionary paths, evolutionists suggest that A. achilles may resemble our common ancestor with apes.* The fossil resembles a tarsier—a small primate that is not considered a human ancestor—but it has some characteristics of primates that are counted in humanity’s lineage.

From the evolutionary point of view, such a mosaic of primate features must be explained by putting the animal at a branching point and revising the rest of the evolutionary scenario as needed. But having small eye sockets and a heel bone a little wider and shorter than those of tarsiers does not mean the animal was an evolutionary missing link. The question should be “what was it?” not “what was it becoming?”

Extinct animals in the fossil record are just examples of biodiversity, not signposts along the hypothetical evolutionary origin of humanity.