To help counter evolutionary teaching in astronomy, we at AiG have been doing our own kind of “beaming up,” and it’s been occurring inside our popular planetarium at the Creation Museum.

Take an exciting walk through history with this brand-new timeline!

I’m sure you have heard the famous saying from the Star Trek TV series, “Beam me up, Scotty!” The 1960s series, which has become a cult classic (I have to admit I’ve watched many episodes myself!), told stories of the crew of a futuristic starship, the Enterprise, as it explored the universe.

Sadly, though, this TV series also “beamed up viewers” into a universe full of evolutionary ideas.

To help counter evolutionary teaching in astronomy, which is so pervasive in schools and science museums (as well as the media), we at Answers in Genesis have been doing our own kind of “beaming up,” and it’s been occurring inside our popular planetarium at the Creation Museum. Here at the museum, we proclaim what the Psalmist acknowledged: “The heavens declare the glory of God” (Psalm 19:1).

This month, I’m happy to announce that we can now begin “beaming up people to the stars” in two spectacular new ways. 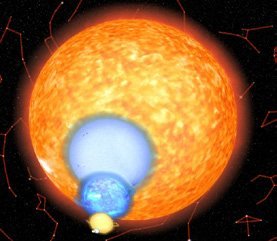 The sizes of nearby stars are contrasted in this colorful scene from the new enhanced edition of our Created Cosmos planetarium program.

First, AiG’s Dr. Jason Lisle, the creative genius behind the amazing astronomy programs that hundreds of thousands of people have seen in our Stargazer’s Planetarium, has converted our most popular program—The Created Cosmos—into a high-definition production. Using the latest software, state-of-the-art hardware, and even more special effects, Dr. Lisle has produced what I call a “Wow!” program. In a very visual and moving way, The Created Cosmos glorifies the Creator and defends the accuracy of His Word.

Dr. Lisle’s high-quality research in astronomy is included in the planetarium’s various programs. Among other things, he shows how the universe cannot be billions of years old—and that it did not result from some “big bang,” as evolutionists claim.

Second, we have now completed our own observatory on-site, with high-power telescopes.We are thankful to the many AiG supporters who gave generously to help us construct a unique building. It includes a roof that slides off to the side so that the telescopes inside can be used to explore the heavens during special evening programs on the museum property.

One of the telescopes has great historic value (more about that later), and it will stand alongside our large Newtonian telescope. AiG has six other telescopes, including a 14-inch Ritchey-Chrétien, two 12-inch Schmidt-Cassegrains, a 10-inch Newtonian, and a high-quality refractor that Dr. Lisle has already been using for special Stargazer evening programs.

Young people and adults will have the unique opportunity to come under Dr. Lisle’s creationist-astronomy teaching as they peer through these spectacular telescopes and explore the heavens.

Not only will our guests enjoy the special evening programs, but Dr. Lisle will now have the ability to conduct even more astronomical research with these telescopes.

One of the telescopes I alluded to earlier has great historic significance: the Johnsonian telescope. A scientist named Lyle Johnson, who was a Christian and creationist, invented this telescope in the 1940s. It was eventually used in NASA’s Moonblink program (1964–1966), and now we have the original. Johnson’s invention was so innovative that telescopes based on his design are known today as “Johnsonian telescopes.”

The Johnsonian telescope was being used at a Christian camp (“The Wilds”) in North Carolina. Not having the qualified astronomers to use and maintain the telescope, the camp, with the permission of the Johnson family (Mr. Johnson passed away in 1996), offered it to the Creation Museum. They also gave us a second large telescope. 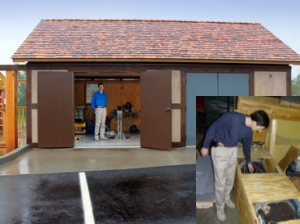 Recognizing the value of this historic item, and to honor Mr. Johnson and His love for God’s Word, contributors gave the funds necessary to build the attractive and functional AiG observatory.

Because of the Johnsonian’s historic value, we hope secular scientists will now visit the Creation Museum.

The more we learn about the universe and the more we share that knowledge with our visitors, the more we exclaim with the Psalmist, “When I consider Your heavens, the work of Your fingers, The moon and the stars, which You have ordained, What is man that You are mindful of him, And the son of man that You visit him? ... O Lord, our Lord, How excellent is Your name in all the earth!” (Psalm 8:3–9).

Come to the Creation Museum and we’ll “beam you up” to the stars!

Previous Article Body of Evidence! Next Article It’s a Sign!