To Russia with God’s Love . . . Through “Creation Evangelism” 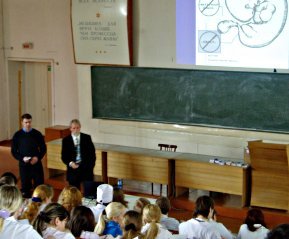 Just before my spring mission trip to Russia, I received a request from a start-up church in the city of Krasnoyarsk, Siberia. The church wanted someone with a higher educational degree to help minister to the 80,000 university students in 20 institutions in that city.

Well, as soon as that request was relayed to me, I knew that the theme of "Creation Evangelism" was the key to reaching these students, rather than a standard presentation of the gospel. Inspired by AiG's Creation College last summer,1 and using the CD-ROMs full of illustrations and teaching notes that AiG provided at this intensive workshop, I prepared three PowerPoint presentations in Russian.

These CDs-called "Tools for Teaching"-enabled me to create three Russian-based talks on "The Relevance of Genesis," "Six Literal Day or Millions of Years" and "Fossils and the Flood." In addition, I also prepared three presentations on DNA and proteins, junk DNA, and vestigial organs, which were very useful at the medical school and the chemistry department at the universities.

The response was most gratifying. After a 2-hour session for the general public (at which 300 people attended), a session for the youth and young adults was held and continued for 3 hours- until the translator said that he could stay no longer! After I told them that their families would be very proud of their long attention span and their excellent questions, one student said that "we simply want more of God's wisdom."

Here are some of the responses from the evaluation cards that were passed out after the sessions.

The fossils can be made very quickly. The lecture is very interesting. The lecturer made me think about the creation of the world.
- Alexander P.

The earth is not old, as it is supposed; the fossil formation is rapid.
- Natasha

They teach lies in schools.
- Victor

Evolution is not a fact. I have to study this subject. It is interesting to me.
- Maria

It was a great privilege to be able to present the creation/gospel message in Siberia using "Creation Evangelism" and what I had learned at Creation College. Over 900 people (and including some on airplanes!) were exposed to God's truth. About 600 AiG booklets in Russian were given away to students, and about 900 books in Russian were made available at reduced prices. These publications were provided for by the members of my home church Black Mountain Baptist Church in Cave Creek, Arizona (and agreed to within 24 hours of my request!).

Also, the marvelous support of AiG staff in Kentucky, the Slavic Gospel Association in Illinois and Roger Oakland [a creation speaker] in California came through in an extremely short timeline. The scheduling of presentations in Krasnoyarsk by the local Russian Christians was also remarkable. This definitely was "a God thing" in that so much was done by so many in such a short amount of time.

I do not know the exact number of people who made a profession of faith while I was there, but I was told that several people prayed and received the Lord right then, and that many asked for follow up to discuss spiritual matters with the Russian believers. I look forward to the opportunity to do this again. God is at work!