Was the Medieval “Little Ice Age” Triggered by an Indonesian Volcano?

The Little Ice Age was several centuries of global cooling that began in medieval times and ended by about 1850. Scientists have for three decades debated just when the Little Ice Age began and what caused it. A nice bit of climatologic detective work published in 2012 and 2013 appears to have unraveled the conundrum. The work involves scientific analysis of the evidence left behind in the ice and climate models corroborated by historical records written on palm leaves.

The Little Ice Age should not be confused with the Ice Age that occurred in the centuries shortly after the global Flood or the many “ice ages” that believers in millions of years of postulate happened. Though not a “true” ice age, evidence indicates glaciers worldwide advanced significantly beyond the norm, and agricultural effects were evident on a grand scale. The United Nations’ Intergovernmental Panel on Climate Change (IPCC) in 2001 initially cast doubt1 on the significance or global scope of this time of synchronized global cooling apparently unprovoked by human activity. By 2007 however the IPCC admitted that evidence of the centuries of cooling punctuated by several especially cold episodes, following as it did the Medieval Warm Period, actually did appear to be worldwide and significantly synchronized.2 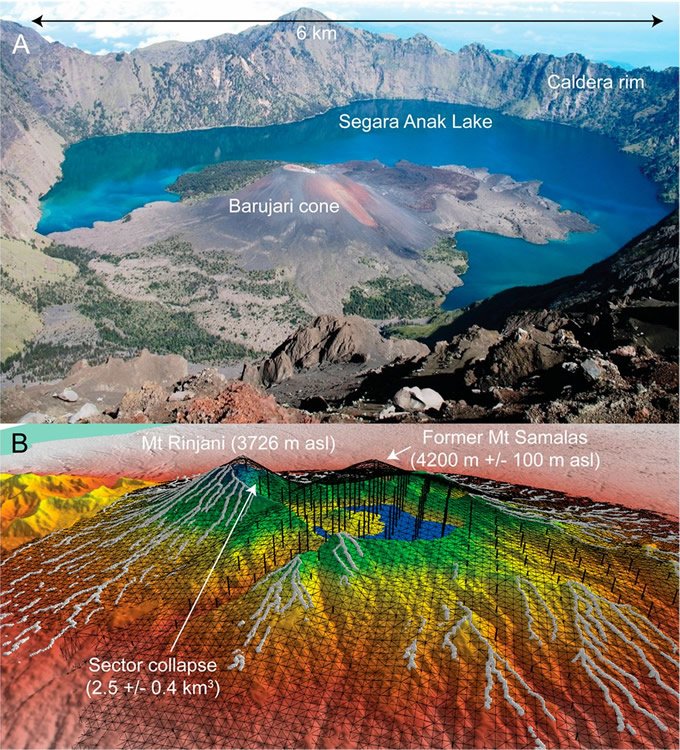 The top photo depicts the caldera above Indonesia’s Samalas volcano. A caldera is a large volcanic crater formed by collapse at the mouth of a volcano after a major eruption blows its top off. Calderas, like this one, often form lakes. The Samalas caldera is over 5½ miles across and nearly a half-mile deep. The reconstruction of its pre-eruption state, is shown at the bottom. Volcano experts believe its eruption in 1257 was one of the most powerful in history and may have triggered the onset of the Little Ice Age. Image by F. Lavigne et al., via PNAS.3

Memorialized in the paintings of ice skating on London’s Thames River during medieval yearly freezes that lasted until 1804, the effects of five to six centuries of global cooling that began sometime in the Middle Ages were tragically also memorialized by famines and death throughout Europe. Archaeologists have uncovered evidence of the mass burial of thousands in London around 1258, coinciding closely with the time recent research suggests the Little Ice Age began.4 On an ironically happy note, the famed Stradivarius violins were produced by Antonio Stradivari during the Little Ice Age, apparently from the much denser-than-normal wood from trees that grew during these cold years, and the unique qualities of the wood are thought to have contributed to the unique tone of these violins.5

The Southern Hemisphere appears to have also been affected by the Little Ice Age. Scientific evidence of various types—records of glacier growth in New Zealand,6 studies of ice cores,7 sediment cores from various locales including South Africa and Antarctica, and tree ring data from South America,8 for instance—constitute a growing body of evidence that the Southern Hemisphere and China experienced synchronous climatic shifts coinciding with the unseasonable cool of the Little Ice Age. Whatever triggered it, there is now little doubt in the minds of most authorities today that the Little Ice Age was felt worldwide, though likely with greatest severity in the Northern Hemisphere.

Theories regarding the cause of the Little Ice Age have abounded. Ideas include volcanic activity, earth’s orbital variations, decreasing solar radiation, changes in ocean currents, deforestation due to human agricultural activity, or just the natural variation of climate. And besides determining what, if anything, triggered these centuries of cooling, scientists also needed to determine what could make such a time last for centuries.

Last year geochemist Gifford Miller of the University of Colorado, Boulder, and colleagues did just that. Analyzing layers of Icelandic glacial ice that were correlated directly with a millennium of historical records of volcanic eruptions, they found that the ice layers thickened substantially in the 13th century. The timing of this apparent sudden increase in cooling correlated with radiocarbon dates of large clusters of Canadian Arctic vegetation that died en masse near the edges of glacial ice, suggested that the climate cooling was not a localized phenomenon.

Miller suggested that a series of closely timed volcanic eruptions over just a few decades—as documented in historical records—put sufficient sulfurous aerosols into the stratosphere to reflect much of the sun’s radiation back into space. Climate models showed that the resulting cooling and growth of glacial ice in the North Atlantic would bring the glacial ice to melt in the sea. Seawater is denser than pure water, and melting glacial ice is not salty; therefore, computer models indicated the failure of the watery layers in the North Atlantic to mix properly would have been sufficient to disrupt the oceanic stirring that ordinarily modulates the climate of regions around the North Atlantic. The meteorological impact of this disruption, Miller reported in Geophysical Research Letters, would alone be sufficient to sustain the cooler climate for centuries.9

“This is the first time anyone has clearly identified the specific onset of the cold times marking the start of the Little Ice Age,” Miller explained. “We also have provided an understandable climate feedback system that explains how this cold period could be sustained for a long period of time. If the climate system is hit again and again by cold conditions over a relatively short period—in this case, from volcanic eruptions—there appears to be a cumulative cooling effect.”10

Thus, given that volcanic eruption appeared to coincide with the historical records of sudden cooling in climates and that there was reason to believe a series of large eruptions would be sufficient to set centuries of disastrous cooling in motion, volcanologist Franck Lavigne of the Université Paris set out to figure out just which volcano set the cooling process in motion.

Reporting in the Proceedings of the National Academy of Sciences, Lavigne’s team considered a number of volcanoes known by historical reports to have erupted around the world in the time period pinpointed by Miller’s work. The most likely candidate would be tropical in location, they surmised, since polar ice cores from both the Arctic and Antarctic show the effects of the volcano in question. By matching volcanic glass-like shards from these candidate volcanoes to similar material in polar ice cores that correspond to the onset of the Little Ice Age, they ruled out, for instance, Ecuador’s Quilotoa volcano, which did erupt in the 12th to 14th centuries.

Pyroclastic material from the massive caldera created by Indonesia’s Samalas, however, matched the material in the polar ice from both Arctic and Antarctic samples. An ice core from Antarctica, for instance, even has a sulfate deposit coinciding with AD 1257 =/- 1 year.11 Carbonized tree trunks buried in the Indonesian volcanic rock radiocarbon-dated to a time no earlier than about AD 1257, coinciding with Miller’s findings. The 800-meter deep caldera formed by Samalas’ eruption is consistent with one of the most violent volcanic explosions in recorded history, having spewed debris up to an altitude of 43 kilometers. Finally, the Babad Lombok, historical records written on palm leaves in Old Javanese, report a 13th century catastrophic eruption of Samalas that destroyed the Lombok capital of Pamatan and much surrounding territory, decimating the population. Levigne and colleagues speculate that somewhere beneath the Indonesian volcano’s caldera could be entombed Pamatan like a “Pompeii of the Far East.”12

Answers in Genesis geologist Dr. Andrew Snelling, commenting on the studies by Miller and Levigne and noting that the time in question can be corroborated by historical records, says:

It is all a neat piece of detective work, which is sound. They even refer to local written records. There is nothing wrong with their radiocarbon work, as radiocarbon seems to be close [to historically documented dates] back that far. And the ice cores work is okay, because again the ice layering seems to be okay that far back. It only gets dubious deeper in the ice cores. So the evidence seems to be sound and consistent with their conclusions.

In the wake of the uproar over the IPCC’s recent radically “confident” conclusions and recommendations regarding the alleged human role in current climate change, Dr. Snelling adds the Little Ice Age was a time “when the climate changed without human activities having anything to do with it.”

Thus, the mystery of the Little Ice Age is being solved by the agreeable confluence of scientific data corroborated with historical records. The dates of volcanic eruptions in Iceland provide solid calibration for the dates assigned to the layers of ice in the frozen record. As Dr. Snelling notes, the interpretation of radiocarbon data corresponds pretty well to historical records within this time frame. See “Radiometric Dating” to learn how unverifiable worldview-based assumptions introduce several sources of error to dates farther back in history. A confluence of scientific data with the Old Javanese historical account of Samalas’s eruption justify a measure of confidence in the reported conclusions.

By analogy, it is worth noting that the biblical historical account is the only historical account available for certain periods of earth’s history much farther back in time—the time of the global Flood and farther back to the time of Creation. When the findings of the fossil record and geology are interpreted in light of the biblical historical record, there is likewise a confluence of conclusions. The biblical record is not in conflict with the actual observations of science, but only with interpretations drawn from various worldview-based assumptions. Yet when the biblical record is ignored and a determination to explain our existence without a Creator guides one’s thinking, the worldview-based scientifically unverifiable conclusions of evolution result. Too bad many who wish to know more about our origins don’t acknowledge God’s eyewitness historical account, as recorded in the Bible, which sheds the light of historical truth on the geological and biological “mysteries” of our distant past.