What an amazing world we live in! Such varied and dramatic landscapes, from the endless dunes of the Sahara to the lofty peaks of the Himalayas and the volcanic Hawaiian Islands. We marvel at their beauty and breathtaking scale, in awe of the Creator who produced such grandeur.

But if you take a closer look, you’ll discover a very different story. All these grand features speak of massive changes in the past, on a scale never observed today. Every landform required earth-moving processes to tear away miles of material and redistribute them somewhere else—not by slow accumulation but by rapid and catastrophic processes.

All geologists, whether they believe in creation or evolution, agree that the original earth didn’t have 5.5-mile-high (8.85 km) mountains like the Himalayas or volcanic mountains that rise 6 miles (10 km) from the ocean floor, like Mauna Kea.

In fact, not a single landscape that we visit, such as the Grand Canyon, is in its original form. The canyon walls are full of mud, sand, and fossils transported from somewhere else. Sometime in the past, whole mountain ranges were shaved down to their roots to become building material for these new features. Even Mount Everest is built, in part, out of marine fossils. Later super-floods and ice age glaciers (even in Hawaii!) sculpted these landscapes into the scenes we enjoy today. 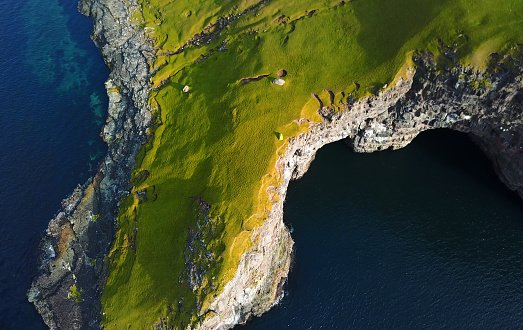 The Faroe Islands, near Iceland, are known for their many picturesque fjords (glacial valleys). Volcanic eruptions built the islands sometime after Noah’s flood, and then glaciers sculpted fjords now filled by ocean water. Pictured here is the tip of Sørvágsfjørður, a fjord on Vágar Island.

Secular geologists are often hard-pressed to explain how current slow processes could produce such large-scale change. Creationists, on the other hand, recognize that a unique event—the global flood of Noah’s day—set in motion the powerful forces necessary to shape this beautiful scenery.

Many may assume the flood was directly responsible for all the landforms we see today, as “the world that then existed was deluged with water and perished” (2 Peter 3:6) and “the waters receded from the earth continually” (Genesis 8:3). But such a massive reconfiguration of the earth, as the continents were raised out of the flood waters, would have created unstable geologic conditions that must have continued to produce dramatic changes for decades in the post-flood world.

Consider this. Flood sediments were not fully hardened and were still saturated with water as new continents began to rise one year after Noah’s flood began. Even today, think about what happens on mountainsides after heavy rains. We can only imagine what happened back then! We will consider five major examples of catastrophes that reshaped the planet soon after the flood: mountain building, supervolcanoes, mass erosion and landslides, glaciers, and expanding deserts.

The psalmist saw how these reshaped landscapes speak of the Creator’s continued power: “The mountains rose, the valleys sank down to the place that you appointed for them” (Psalm 104:8).

Earth’s mountainous regions must have originally lain at sea level during Noah’s flood. Why do we think this? Because today’s mountains often contain fossilized sea creatures that water (at sea level) must have deposited before the deposits rose, often many thousands of feet, to their current elevations. As these ranges rose, brittle basement rock broke along faults, and softer sediments were bent into giant folds. Movement must have been astonishingly rapid at times because that is the only way to explain the melted glass-like rock (called pseudotachylyte) sometimes found in the fault zones.

The Tetons of Wyoming, for instance, rose two miles above the neighboring land to the east! You couldn’t move rock so high and so fast without producing massive earthquakes, perhaps 100 times greater (or more) than the very largest earthquakes ever experienced today. Keep in mind our earth is covered with such high-rising mountain ranges! 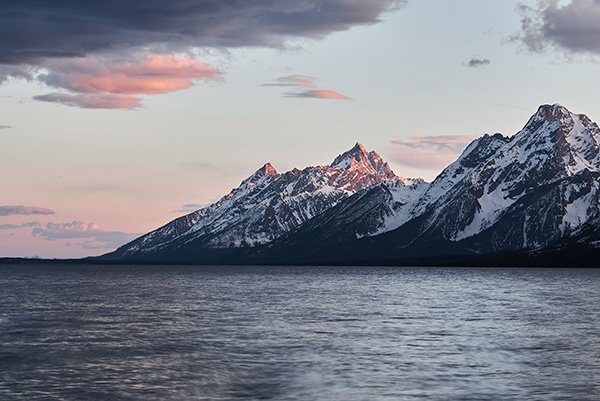 The marine rocks now found at the tops of the Teton Range can also be found deep below this lake—a difference of almost two miles! Psalm 104:8 tells us mountains rose up after the flood.

Even the most destructive modern volcanic eruptions, such as Mt. St. Helens in 1980, are puny compared to past eruptions. The extinct volcano Pichu Pichu in the Peruvian Andes, for instance, currently rises an impressive 18,583 feet. But before its summit slid away (in the unrecorded past), its height rivaled Mt. Everest! Similarly, most of Yellowstone National Park is located within the crater (called a caldera) of a colossal collapsed volcano. It is just one of many supervolcanoes that shook the earth millennia ago. In many of these cases, the lava and ash that formed these volcanoes are on top of flood deposits, meaning they must have violently erupted after the flood was over. Hawaii’s eight volcanic islands are another impressive example. Big Island, measured from the seafloor to its highest peak on Mauna Kea, is even higher than Mt. Everest! Imagine how much lava was required to produce this mound and how many years it took to grow! No flood sediments appear on its flanks, so it must have risen sometime after the flood ended. 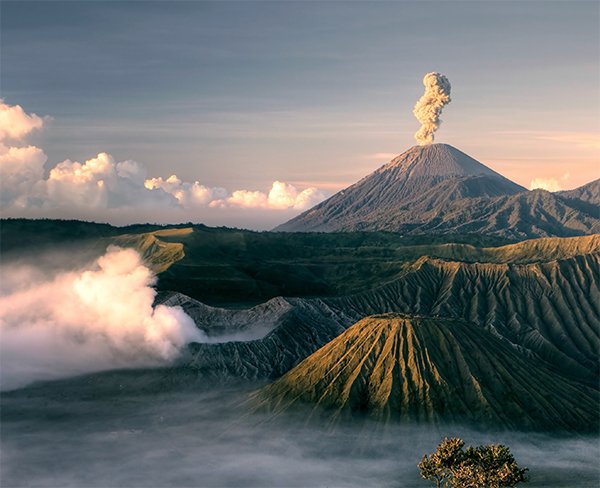 Thousands of volcanoes like Mt. Bromo ring the Pacific Ocean, where tectonic plates are colliding. Their eruptions still reshape the earth but are puny in comparison to past extinct volcanoes.

After the flood, the continents were covered with soft, pliable, water-filled marine sediments that hadn’t fully hardened into rock. Many variables encourage landslides, but the most important is water, water, water! Other factors include giant earthquakes associated with rising mountains, steep slopes, and too few plants and trees to hold the new soils.

As mountains rose, landslides and erosion must have occurred on a massive scale for decades. For example, in 2014, geologists discovered a landslide in southwestern Utah (composed of post-flood rocks), which is more than 50 miles long, contains up to 500 cubic miles of rock, and probably moved at speeds approaching 200 mph! For comparison, the landslide at Mount St. Helens in 1980—the largest ever witnessed by modern man—dumped less than a cubic mile of material!

In addition, the rains would fill any natural enclosed basins that formed amidst rising mountains. But the natural earthen walls of these lakes would be unstable, since the material was unconsolidated and waterlogged. It wouldn’t take much for lakes to weaken the temporary dams, overflow them, and break through catastrophically, cutting deep canyons as floodwater barreled toward the ocean.

Perhaps this was the cause of the Grand Canyon (and many other canyons). In fact, more than 10,000 cubic miles of sediment appear downstream in the Salton Sea area of California, carried by surging water. 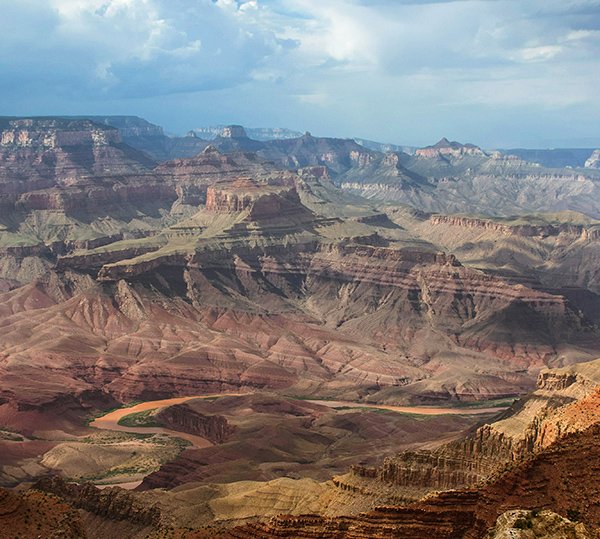 One hypothesis for the Grand Canyon’s origin is that a series of large upstream lakes broke through their natural dams. The released water could have cut the canyon catastrophically.

Another powerful earthmover after Noah’s flood was ice age glaciers. Today, most glaciers occur only on remote mountains, Antarctica, and Greenland. But for a short time after the flood, large sheets of ice covered huge swaths of North America, Europe, and Asia. Glaciers even formed on mountains at lower latitudes, such as Hawaii’s tallest mountain peaks! Mountain glaciers sculpt and carve mountains, making them sharp and jagged. Continental glaciers can smooth and flatten out the landscape, carve huge lake basins (like the Great Lakes), and leave ridges and hills as they retreat.

Thus ice, not liquid water, produced many of the planet’s most beautiful scenes. Yet the flood is still to blame, at least indirectly. Remember the warm ocean water that produced erosion-causing rain? At higher latitudes and in cooler continental interiors, the same warm, evaporating water produced snow. When more snow falls than can melt, glacial ice piles up. Ice could have reached monumental thickness during the ice age—some of today’s glaciers are about two miles thick! As a glacier moves, rocks imbedded in the ice carve and sculpt like sandpaper, making rugged beauty.

Ice shaped the landscape in less direct ways too. Sometimes the glaciers trapped water behind dams in huge inland lakes. When the ice dams broke, they released vast floods of water that cut canyons out of solid rock within days, such as the 900-foot-deep “scabland” canyons we see in central Washington. Geologists have now identified more than 60 large “paleofloods” that occurred around the time of the ice age. During the ice age, glaciers covered many mountain ranges and cut vast valleys. Only a relatively small number remain to continue reshaping the earth, such as this one in southern Argentina.

Something else interesting happened after the flood to produce further changes in the earth’s landscapes—climate change. The rise of the Andes and Himalayas changed wind patterns, and moving continents redirected ocean currents. For a while, vast regions were well-watered and lush, but these changes have caused them to become dry and barren—consider the story of Abram and Lot as they saw the once-fertile land around the Dead Sea in Genesis 13. That radical climate change includes the southwestern United States and the desolate Sahara. Both places once had large rivers, lush forests, and herds of hippos, horses, crocodiles, and other wildlife.

As oceans cooled to today’s temperatures, evaporation slowed and regular rains ceased. The land no longer had abundant vegetation to hold soils, and winds fashioned loose sand into dunes. Occasional flash floods in these dry environments caused further devastation. We see some evidence of this even today. In the side canyons of the Grand Canyon, rains can convert loose rock and soil into fast-moving mudflows, which can carry huge boulders and tear apart the landscape further before they come to rest.

Imagine the scale of past disasters across whole regions of the continent where the climate was changing! 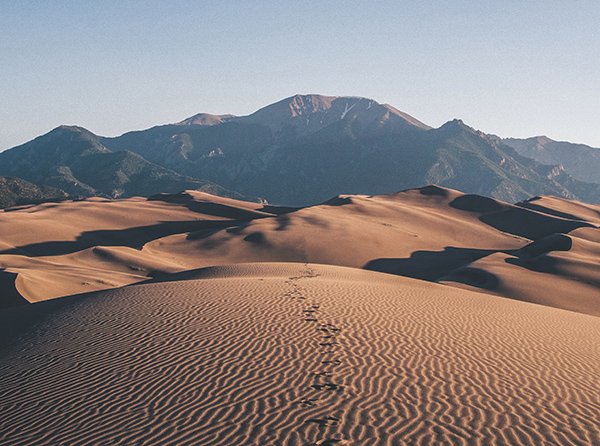 Many desert regions once had lush climates until rising mountain chains and moving continents redirected the wind and ocean currents. Sudden drying and loss of vegetation enabled flash floods to tear up the landscape and wind to build huge dunes.