Writing in the early 1800s, lawyer-turned-geologist Charles Lyell radically changed how people look at the world. Using his legal training to build cases, he argued convincingly that the earth’s piles of rock layers were formed over millions of years by slow and gradual processes. His skill was so persuasive that geologists stopped even considering the possibility that some large sediment layers formed rapidly. Terms to describe fast deposits weren’t even coined until recent decades. Older geologic dictionaries don’t have a word for deposits made in storms (called tempestites) or for sediment layers reshaped by earthquakes (called seismites).

Even now, because of their old-earth bias, secular geologists assume a rock layer formed slowly unless conclusively demonstrated otherwise. Further, they don’t look for deposits affected by global-scale events. But creationists do.

In 1996 a rancher in Wyoming showed creation geologist Kurt Wise and me a massive sandstone bed with convoluted layering on his ranch. At the time we recognized it as important evidence of the Flood catastrophe, but we did not understand how it formed or its significance.

Then in 2011 creation geologist Arthur Chadwick reported a surprising discovery.1 While excavating thousands of duck-bill and other dinosaur fossils at the ranch for 15 years, he had traced the same six-foot-thick (2 m) sandstone bed across the entire 11-square-mile (28 km2) ranch. He also recognized it as a seismite. That was astonishing, since geologists are used to thinking of seismites in terms of inches, not feet.

So why would anyone care about a seismite? Because these are sediment beds with many internal layers (called laminations) that were still soft when an earthquake shook the ground and disturbed the layers. Because the effect of an earthquake spreads so quickly (earthquake waves move through rocks at the speed of sound), an earthquake can leave its mark over a vast area of still-wet, soft sediment before any new deposits are laid on top.

As a result, the nice, level layers became convoluted. In cross-section, they look a bit like waves frozen in stone (like the buckling or folds produced when one pushes on the edge of a carpet mat). Thus seismites record the effects of individual earthquakes that impacted the soft layers before they hardened into rock. They’re usually only inches (centimeters) thick. One of the largest recorded earthquakes in modern times, centered near Alaska, produced only a 9-inch-thick (23 cm) seismite.

Thus this six-foot-thick seismite across a Wyoming ranch is huge—many times larger than any seismites known to form by even the most powerful earthquakes over the past 3,000 years (and there have been some whoppers!). A few other massive seismites have been reported,2 but not in the dinosaur-fossil-filled layers where Chadwick was working.

More surprises were in store. Kurt Wise decided to investigate further because the discovery of an identifiable seismite would provide a powerful new tool for geologists. Before Chadwick’s discovery, geologists had no easy way to distinguish at which levels any deposits and fossils lie within the half-mile-thick (~800 m) Lance Formation. It’s been basically an indecipherable puzzle of repeating sandstone and shale beds, made more confusing by the rocks being faulted, weathered, and mostly covered by grasslands. But geologists want to know the order in which the sediments were deposited and the dinosaurs were buried.

A seismite would make a great “marker bed.” It’s like a vast sheet that is different from every layer below it and above it. If geologists could identify this sheet, they would know whether dinosaurs were buried earlier than the earthquake (below it), or later than the earthquake (above it), or maybe even as a result of the earthquake. That’s important to reading history from the rocks (to geologists, anyway).

Wise has found not just one but at least a dozen huge seismites. That’s a dozen or more massive earthquakes in rapid succession that affected hundreds of square miles.

Wise decided to see how far the earthquake reached. In an earlier trip he had already found that this distinctive seismite bed could be traced onto a neighboring ranch, where it showed no sign of tapering off. Then in 2014 he traveled 20 miles (32 km) south of Chadwick’s excavation to the original area where geologists first identified and defined the layers making up the Lance Formation. His discoveries have surprised even him. Wise has found not just one but at least a dozen huge seismites (see example in photo). That’s a dozen or more massive earthquakes in rapid succession that affected hundreds of square miles. The monstrous six-foot seismite that Chadwick had identified paled in comparison to several others that Wise found, which are up to 30 feet (9 m) thick. 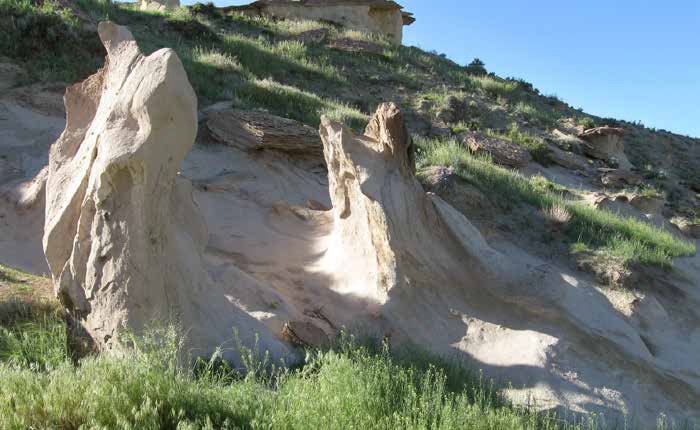 These sandstone pillars are part of a huge seismite that could only form by colliding continents.

What catastrophe could cause an earthquake big enough to disrupt 30 feet of the earth’s surface? Secular geologists don’t have an explanation. Not even an asteroid impact can explain such huge seismites, especially in rapid succession. Asteroid impacts are the most powerful geologic processes known to conventional geologists, who often postulate that one killed off the dinosaurs!

So what could explain these huge seismites? For geologists who begin with Scripture and are not distracted by Lyell’s biased arguments, they are actually easy to explain. Creation geologists postulate that continents broke apart rapidly and collided, generating humongous earthquakes during the Genesis Flood, which destroyed “the world that then existed” (2 Peter 3:6).

Dr. Andrew Snelling holds a PhD in geology from the University of Sydney and has worked as a consultant research geologist in both Australia and America. Author of numerous scientific articles, Dr. Snelling is now director of research at Answers in Genesis.
Previous Article Power of Past Super-Floods Next Article Ancient Supercontinent