If you think the earth was a quiet place after the Flood receded, read on. The rock layers speak of a violent period after the Flood, lasting many centuries, when catastrophes continued to reshape the earth. Not surprisingly, it took a long time for the earth to recover from the shock of the Flood, which ripped apart the planet’s surface and cycled rocks throughout the mantle.

The earth’s rocks are full of evidence for catastrophe. When I was a young geologist, this was one of the facts that convinced me that the scriptural account of Noah’s Flood must be true.

Nearly fifty years ago, when the book The Genesis Flood was published, most creationists believed the entire fossil record was made by the Flood and that all evidence of major erosion (such as Grand Canyon) was generated by retreating Flood waters. Although young-earth creationists still think the Flood explains a vast portion of the rock record and that the retreating Flood waters caused tremendous erosion, we now believe that a series of major post-Flood catastrophes, possibly continuing for hundreds of years after the Flood, are responsible for many of the uppermost fossils and surface landforms.

Biblically, it is easy to determine the end of the Flood. We mark it with Genesis 8:18, when Noah and his family left the Ark. Geologically, this event is much more difficult to identify.1 One expectation is that a worldwide Flood should leave marine fossil deposits across continents, while post-Flood catastrophes should leave local deposits. Since the most recent fossil deposits are relatively local in extent, the consensus among young-earth creationists trained in geology2 is that these deposits were laid after the Flood. 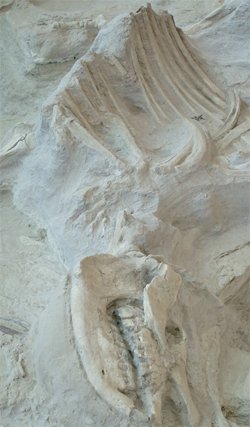 A rhinoceros fossilized in ash.

For fish and other animals to be preserved as fossils after Noah’s Flood, they still had to be buried rapidly. This means that catastrophic processes must have continued into post-Flood times, albeit not at the global scale of the Flood.

We are very familiar with catastrophe today. Consider Hurricane Katrina, which caused around $100 billion (U.S.) in damage; the Indian Ocean Tsunami of 2004 killed at least 230,000 people; the eruption and aftermath of Mt. St. Helens cut 150-foot-deep (46 m) canyons in solid volcanic rock; the Pakistan earthquake of 2005 killed 86,000 people, and the China earthquake in May of 2008 killed more than 80,000 and left millions homeless.

Yet post-Flood catastrophes of even greater scale have occurred (and they have been catalogued by creation geologist Steve Austin3). In fact, it appears that volcanic eruptions and earthquakes were greatest during the Flood and then gradually weakened to today’s intensity. These early post-Flood catastrophes had the power to cause enormous geologic change, including massive erosion, altered landscapes, and deposits of sediment layers thousands of feet thick.

But what conditions could lead to such “residual catastrophes”?

Several unique conditions were at work after the Flood. One problem was the instability of the continents, which had just undergone rapid movements and changes. The rising of mountains and the lowering of the ocean basins help explain how the Flood water drained off the continents and back into the oceans (possibly described in Psalm 104:8).

These major changes were probably not complete at the end of the Flood but continued into the post-Flood world, perhaps for centuries. Even conventional geologists have documented that most of the world’s mountain ranges rose very recently.4

Another problem was the unstable climate. Just as warm ocean water creates hurricanes today, the post-Flood oceans were exceptionally warm and probably generated massive hurricanes and “hypercanes”5 (see “A Dark and Stormy World,” p. 78). These storms could have produced incredible erosion in the post-Flood world, where little vegetation was established to hold the soil, and where the Flood sediments had not yet hardened. 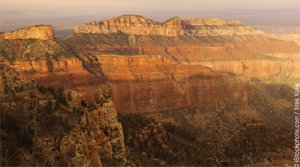 Geologists have documented that unstable landscapes, such as regions prone to mountain building, earthquakes, or volcanic activity, are more prone to erosion than landscapes without these processes.6

Heavy rainfall after the Flood, coupled with the rising of mountains and plateaus, created the potential for reshaping the landscape, including the cutting of huge canyons. Rising mountains would sometimes create large basins that could quickly fill with water or mud and then overflow. A miniature example of this occurred in recent times at Mt. St. Helens. Melting snow and ice quickly filled part of the crater in the months after the eruption of May 18, 1980. Suddenly, mud overflowed the crater and catastrophically cut 150-foot (46-m) deep canyons on the north side of the volcano.

Geologists have found clues of such post-Flood canyon-cutting in the American West. The Great Salt Lake in Utah used to be much larger and deeper, forming Lake Bonneville. That basin eventually overflowed, catastrophically draining northward and gouging out the Snake River area in southern Idaho. At another location in the West, upstream from Grand Canyon, we find evidence of a whole series of former lakes. One theory for the carving of Grand Canyon is that these upstream lakes catastrophically breached various barriers that held them back. The last barrier to be broken through was the Kaibab Upwarp, which led to the cutting of Grand Canyon.7

After the Flood, North America and other parts of the world experienced an Ice Age, when surging ice sheets gouged the landscape. The glaciers held back large lakes that later broke out and caused unimaginable erosion.

It is now well documented that an Ice Age catastrophe formed the Channeled Scablands in eastern Washington. A temporary ice dam had created a large lake, called Lake Missoula, which broke through and cut deep canyons in hard volcanic rock.8 Geologists are beginning to realize that, during the Ice Age, dozens of similar floods (some many times larger than the Missoula flood) caused extensive changes to the earth’s surface. These are referred to as jökulhlaups, or glacial outburst floods. Large amounts of water (or lakes) can accumulate under glacial ice and then burst forth from under the ice.9

According to the Bible, major geologic catastrophes are not over. Revelation 16:18–21 speaks of an earthquake so large that the earth’s mountains will be leveled and its islands will disappear as a result of the intense shaking. An earthquake of this magnitude is apparently unprecedented, even compared to those that occurred during Noah’s Flood, because verse 18 says that this will be the greatest earthquake “since man has been on the earth.” This earthquake will likely cause immense volcanic activity because the same passage speaks about “huge hailstones” that fall from the sky.

Creation geologists are still actively developing models of Flood and post-Flood geology. No creationist questions that a tremendous amount of geological activity occurred globally during Noah’s Flood. Yet it is also clear that geologic catastrophes have continued, but on a local and regional scale. These processes are still capable of cutting canyons and producing fossils.

Catastrophes remind us that we are still under the Curse and that this earth is not permanent. God is our only source of hope. Just as the Flood left reminders of God’s judgment on human sin, the book of Revelation warns that the earth will experience another period of global geologic catastrophe, when God again judges the world.

Previous Article F.A.S.T. and Furious Next Article A Dark and Stormy World