by Dr. Elizabeth Mitchell on May 23, 2013
Share:
Email Using:
Gmail Yahoo! Outlook Other

Stampeding dinosaur story may tiptoe out the door.

Lark Quarry in Queensland, Australia—home to the Dinosaur Stampede National Monument—has long been regarded as the only known fossil record of a dinosaur stampede. Preserved in Lark Quarry’s mid-Cretaceous rock are almost 4,000 individual tracks representing about 180 dinosaurs.1 Identified as dinosaur tracks in 1979, and reported on in detail in 1984, many are small, but at least one of the track-makers seems to have been quite large. Many seem to be fleeing in the same direction, though some appear to be running toward the larger animal.2 Researchers have debated the types of dinosaurs represented and the tale the tracks tell, but Romilio and colleagues question the entire stampede story. 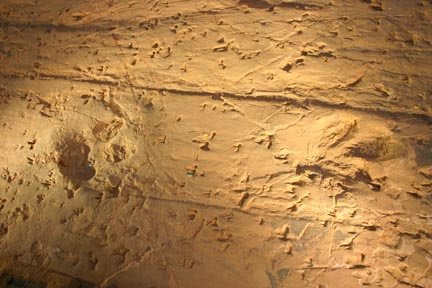 These are a few of the nearly 4,000 dinosaur footprints preserved at Lark Quarry in Queensland, Australia. Long regarded as the only fossilized evidence of a dinosaur stampede, a paper published in the Journal of Vertebrate Paleontology now challenges that view, suggesting the tracks were made by dinosaurs buoyed up by water going tippy toe downstream. Image by Jaime Rankin, via Australia Department of the Environment.

Romilio’s research, which culminated in a paper recently published in the Journal of Vertebrate Paleontology,3 began as a study of dinosaur locomotion. Many have thought the largest dinosaur’s footprints were those of a carnivore striking fear in the chicken-sized members of the group. Romilio believes the big prints belonged to the large herbivorous Muttaburrasaurus.4 And rather than a scene of panicked mayhem with little dinosaurs fleeing from a vegetarian, Romilio proposes the “tippy-toe” tracks were made by dinosaurs buoyed up by water. The tracks are fairly widely spaced. Previously paleontologists have interpreted the track spacing as an indication of dino-speed, but Romilio suggests the spacing is instead a result of the dinosaurs just making their way downstream.

Paleontologist Richard Thulborn, who did much of the original work studying the tracks, admits that the motivational aspects of the tale embodied in the “prey-pursuit scenario”5 have always been speculative. However, he stands by his original assessment that the large prints are those of a carnivorous theropod. Thulborn notes that the tracks now available for study—despite the purpose-built climate-controlled structure protecting them—have “deteriorated considerably since it was excavated in the 1970s.”6 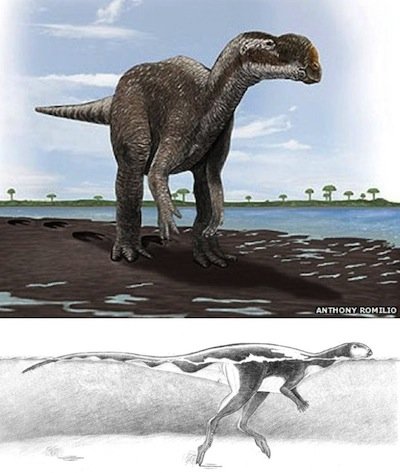 Paleontologist Anthony Romilio suggests that the large herbivorous Muttaburrasaurus (above) made the large tracks at Lark Quarry and that, shortly after, smaller dinosaurs buoyed up by flowing water added their “tippy toe” tracks (below). Detractors say that water flowing over the recently made big tracks would have washed them away. Images by Anthony Romilio, via BBC.

By comparing then-and-now photographs, Thulborn believes a deteriorating footprint has been altered “by the arbitrary addition of an artificial rear margin.”7 Therefore, Thulborn writes that Romilio’s “iconoclastic claims” are “based partly on misconceptions and partly on fabricated data that have been assessed uncritically using quantitative measures of questionable significance” and are therefore “groundless.”8

Queensland Museum’s Scott Hocknull also disagrees with Romilio, saying, “Just simply looking at the footprints isn't enough. When you look at the footprints, they look like big, round toes, when in fact, that's the mud being squished out from below the toes—between the toes—as the animal is slamming its foot into the mud.” Pointing out an apparent claw mark, Hocknull says, “See this triangular piece? That’s the claw mark. There's only one type of animal that makes those sorts of footprints—and that’s a meat-eating dinosaur.”

Hocknull also notes that footprints formed as Romilio suggests would not last.

I don't want poor scientific process to get in the way of an amazing story. If we simply just accept that all of the last 30 years of accepted stampede information, data and work is wrong—and that it’s simply a Muttaburrasaurus wandering through some mud, and then a bit of a flowing river with some tracks—it really does take the significance out of the site.

The idea that dinosaurs with claws could only be meat-eaters flies in the face of the biblical history. In the beginning all animals were vegetarians. Genesis chapter one records God’s eyewitness account of His creation of all kinds of land animals—which would include dinosaurs—on the 6th day of creation week. Genesis chapter one confirms that all the animals in God’s original creation were plant-eaters. Exactly when some began eating each other, after sin’s curse entered the world, is not recorded. Therefore, it is possible the big tracks—made around the time of the Flood, nearly 1,700 years after sin’s deadly curse entered the world—belonged to a meat-eater. We simply cannot be certain. But the notion that sharp claws prove an animal evolved as a meat-eater is an unverifiable worldview-based presumption.

The fact that the fossilized tracks have been difficult to protect for three decades does not lend credulity to the claim they have survived for millions of years.

As to the significance of the Lark Quarry events, the comment by Hocknull—that the mud in the bottom of a stream would not preserve footprints—deserves some attention. First of all, Romilio didn’t say the tracks were made in mud: he notes they were preserved in sandstone.9 Most importantly, in order for dinosaur tracks to be fossilized, preservation of the tracks as fossils would have required sand permeated by mineral-laden water and sudden burial of the impressed footprints. Finally, the fact that the fossilized tracks have been difficult to protect for three decades does not lend credulity to the claim they have survived for millions of years.

Lark Quarry’s Cretaceous tracks likely formed during the global Flood less than 4,500 years ago. Footprints in rivers and on beaches ordinarily wash away quickly. The surging waters which “prevailed and greatly increased” (Genesis chapter 7) during the early months of the Flood would have brought mineral-rich ocean water and sand inland, making a sediment permeated by mineral-rich water in which creatures could have pressed their prints as they ran or swam to flee the rising waters. Subsequent surges would have hauled in more sediment to rapidly bury those prints and “set them” by pressing water from the sand so the interspersed cement bonded the grains, thus preserving the footprints. More tracks could have then been pressed into temporarily exposed surfaces, but ultimately the track-makers were swept away by the Flood.

Geologist Dr. Andrew Snelling, of Answers in Genesis, explains how the Lark Quarry tracks actually fit into the biblical history of the early months of the global Flood:

Mid-Cretaceous rock layers were not laid down during the onset of the Flood, but our best guess currently is not long before Day 150. In this area of Australia there are many, many Flood-deposited sedimentary strata layers underneath this layer the tracks are found in. These are dinosaurs that had been swimming in the Flood waters before landing on temporarily exposed wet sediment surfaces when the level of the Flood waters dropped due to tidal fluctuations, and/or a lull between tsunamis.

Thus Lark Quarry—whatever kinds of dinosaurs made the tracks—has a story to tell. That story is consistent with the biblical history of the global Flood. The dinosaurs whose tracks are preserved there could not escape from the judgment that fell on the earth as a result of man’s rebellion against God. In the days of Noah, only eight people (1 Peter 3:20) availed themselves of God’s mercy. And God assures us there will never be another global Flood to destroy the earth (Genesis 9:12–15), but that every human still deserves God’s judgment for sin (Romans 3:23, 6:23). God still beckons us to flee the wrath to come (1 Thessalonians 1:9–10) through His grace available in Jesus Christ. Lark Quarry should remind us of the stark reality of judgment and the importance of receiving God’s grace today (2 Corinthians 6:2).

Previous Paper Taking out the Trash: Bladderwort DNA Is 97% Junk-free Next Paper BSA and Gay: Phase One