The Long Story of Long Ages

One of the most popular beliefs today is that the universe is billions of years old.

This belief is encouraged by claims that such ages are reliable scientific conclusions. Not so well publicised are the many assumptions, guesses and wishful thinking that contribute to such conclusions. These are hidden beneath the frequent, loud claim that any other view is ‘non-scientific’ and not to be taken seriously.

This popular view supposes that belief in an old world only came about because of recent scientific developments, and that belief in a youthful universe belongs to the superstitious past. We are told that Genesis is wrong, due to the limited understanding of the time of its writer.

It comes as a surprise to many, then, that the old universe belief is itself very old; it certainly predates Christ. Ancient people had no problem imagining great spans of time, but Christians from earliest times opposed these ideas.

A similar cyclical system was popular in Ancient Greece and Rome. It consisted of ‘Great Years’, believed to be about 36,000 years each, stretching back into the distant past.

Knowledge of the truth about origins would help their listeners come to know their Creator and Redeemer.

In presenting the gospel, early Christians wanted to expose the falsity of heathen notions of history. Knowledge of the truth about origins would help their listeners come to know their Creator and Redeemer. Theophilus of Antioch (AD 115–181), to this end studied biblical chronology to ‘… throw light upon the number of years from the foundation of the world, and to condemn the empty labour and trifling of [heathens] …’.

Opposing long ages, Theophilus rejected Plato’s claim of 20,000,000 years from the Flood to the present, as well as rejecting Apollonius the Egyptian’s view of (a ‘mere’) 155,625 years. He also defied the evolutionist ideas of his time, writing ‘nor is the world uncreated, nor is there a spontaneous production of all things, as Pythagoras and the rest dreamed …’.

Theophilus’ chronology put the creation of the world at about 5529 BC, in stark contrast to the beliefs of his contemporaries.

Another early Christian, Julius Africanus (AD 200–245) also stood against long age ideas. He specifically rejected the long ages of Egyptians (about their own history) and the Chaldeans (with their ‘48 myriads’) on the basis of the Bible.

Lactantius (AD 240–320) wrote: ‘… the philosophers, since they were ignorant of the origin of all things … said that many thousands of ages had passed since this beautiful arrangement of the world was completed’; and in the same passage ‘… let the philosophers, who enumerate thousands of ages from the beginning of the world, know that the six thousandth year is not yet completed’.

Many early Christians, including Irenaeus and Lactantius, believed that our Lord would return 6,000 years after creation, echoing the six creation days. While this particular belief may have been misplaced, it is impressive that their worldview came exclusively from the Bible, unshaken by the weight of contrary pagan belief. Indeed, they understood pagan belief for what it was: false and in opposition to God, no matter if it was believed by Plato, Pythagoras, or the entire culture.

Lactantius was also critical of pagans for pretending to know of the beginning, thinking that their stories (like the naturalism of today) could not be refuted. He insisted that the Bible exposed their falsity and the worldview they based on it.

Even Augustine (AD 354–430), in his City of God, attacks those who deny a recent creation.2 By Scripture’s authority creation was ‘as recently as within this six thousand years.’ He was also aware of long age ideas: ‘If the brevity of the time be offensive, and the years since man was made seem so few …’. Augustine unashamedly confronted paganism’s contradiction of biblical history. 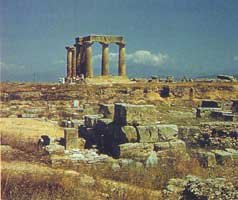 Ancient Greek ruins at Corinth. In New Testament times this was a thriving commercial and religious centre. The apostle Paul wrote two letters to the Corinthian church. Several false pagan ideas of the early Greeks still seem to have an attraction for many modern Christians and church leaders.

Today many Christian leaders, instead of opposing erroneous views of origins, seem confined to them. They appear to neglect the long history of Christian opposition to this pagan teaching and repeat pre-scientific pagan beliefs about the antiquity of the cosmos.

Notwithstanding the scientific terminology of today’s long age claims, these ideas are modern expressions of ancient naturalistic (anti-God) religion.

Turning their backs on God, our Creator, pagans then, as now, used ‘long age’ ideas to persuade themselves that the world could spring from nowhere and for no reason. Or, they claimed that the cosmos was eternal, independent of a creator. Either way they suppressed the truth of God (Romans 1:18).

Modern pagans deny the same things that ancient pagans did. They also entertain similar beliefs about long ages and a mystical, impersonal universe. Books such as Paul Davies’ The Mind of God represent a contemporary version of these elements of ancient paganism.

Many claim that Genesis was based upon borrowed pagan ideas. In reality, the Genesis account of recent creation is in direct opposition to pagan long-age superstitions.

The early Church Fathers knew the importance of truth, revealed by God, in teaching the history of the world.

They knew that if God’s revelation of origins was ignored, then the resulting view of history would be wrong. If they accepted paganism at that point, they would soon enough become part of it.

They could then say nothing meaningful to pagans about redemption because, in agreeing with their beliefs about origins, they would have undermined Christian teaching on the origin of sin and death (the Fall) and the need for redemption.

Exactly this is what is happening in many parts of the church today.

This article draws its details from a published Ph.D. dissertation by F.C. Haber, The Age of the World: Moses to Darwin, (1959:11) Greenwood Press, Westport.