Give Now
Wonders of Geology

The petrified forests in Yellowstone were revealed when the edge of a cliff eroded, leaving many layers of stone trees visible.

Old Faithful, with its rather predictable eruptions, is one of the most popular attractions, bringing millions of guests to this national park every year. Yellowstone is also a wildlife haven, home to such animals as grizzly bears, bison, bighorn sheep and wolves. In addition to its pristine beauty and natural features, Yellowstone is also known for some very unique forests—forests made of stone. 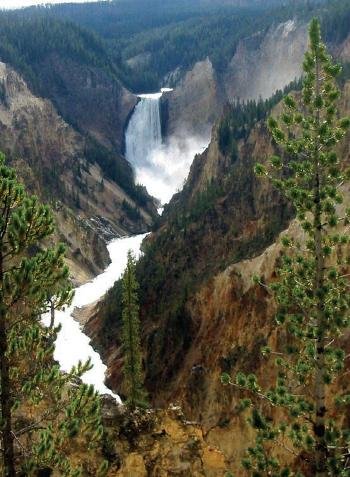 The petrified forests in Yellowstone were revealed when the edge of a cliff eroded, leaving many layers of stone trees visible. At Specimen Ridge, over 27 layers, one on top of another, house these forests, while at Specimen Creek there are over 50 layers of petrified trees. These petrified trees formed through a process called permineralization, which occurs when the pores of the tree are filled by minerals from silica-rich water. These pores then become impregnated by minerals, which reinforce the original remains and prevent the tree from completely decaying. The silica-rich tree then becomes petrified with the individual cells often being visibly preserved. When this happens, the original shape of the object is not changed.

When did they form?

Evolutionists explain the petrified forests of Yellowstone as the result of an ongoing cycle: 1) A forest grows and then is buried by volcanic ash and other debris. 2) Dissolved minerals are soaked up by the trees, petrifying them. 3) The ash weathers into clay and soil. 4) A new forest grows on top of the previous one, which is subsequently buried by volcanic ash to begin the process again. This process would have occurred numerous times to produce the 27–50 layers of petrified forests found here at Yellowstone, estimated to have taken over 30,000 years. Eventually these layers, with their forests, were exposed by erosion, revealing what we see today at Yellowstone.

Biblical creationists explain these forests in a different way. The evidence points to catastrophic processes, which are consistent with the Bible’s teaching of creation about 6,000 years ago and a worldwide Flood. The petrified forests of Yellowstone actually are the result of catastrophic burial during or soon after the Genesis Flood, which with its associated volcanic activity, would have produced the right conditions for these trees to have been rapidly deposited and then to have been petrified quickly.

What is the Evidence?

To know which interpretation is correct, one must look at the evidence present at Yellowstone itself.

Roots: Under normal circumstances, trees have root systems that are very extensive. These roots spread radially into the ground and hold the tree upright. However, the evidence in Yellowstone shows that the roots (and branches) of many petrified trees were actually broken off before the trees were buried. Trees that grew in place and then were petrified should show an extensive petrified root system as well, but what we actually observe are small root balls—evidence of them having been forcefully pulled out of the ground at another location and transported to the Yellowstone area where they were buried.

Soils: Another piece of evidence to be examined is the surrounding soils of these petrified forests. After about 200 years, volcanic ash from an eruption would have weathered into clay, and then into soil before another forest could grow. Each mature forest would have developed a humus layer, consisting of normal organic debris from the trees and plants. The evidence should show layers of clay alternating with thick layers of organic material between successive forests. The fact is that there is no clay found in these volcanic layers in Yellowstone and the average layer of organic material is only about 1 inch thick. The sediments at Yellowstone’s petrified forests also appear graded and laminated, the result of hydraulic (water) action. If these represented a forest floor covered by volcanic ash, no such features should be evident.

Fossils: Forests traditionally carry a wealth of animal life—mammals, birds, insects, earthworms. Therefore, when the volcanic eruptions supposedly buried these forests, they would have also buried numerous forest animals that did not make it out of the area before or during the eruptions. Some of these animal remains would surely have been preserved for later discovery. However, these are completely absent from the area of Yellowstone’s petrified forests.

Petrification: It has been demonstrated that, given the right chemical conditions, petrification can occur very quickly, in the space of days or months. Not only in laboratories, but even in nature, petrification has been observed to take place rapidly. Thus, the timeframe for the formation of the petrified forests is totally consistent with the biblical timescale of a few thousand years.

What is the Conclusion?

Looking at the broken roots, the soils and the lack of fossils gives us proof of several obvious conclusions. First, these trees, as well as the soils, were transported from one location to another, most likely by water. Second, they show evidence of rapid burial. Sufficient clay and organic soil for the growth of new trees is not found in the successive layers. The evidence itself speaks of a rapid sequence of deposition and burial in a catastrophic event, not of thousands of years of slow growth, burial and regrowth.

Yellowstone National Park, where many natural wonders are remarkably preserved, also preserves a testament to the catastrophic Genesis Flood and its aftereffects. Evolutionary and biblical geologists agree on the observational evidence found here in Yellowstone; but they disagree on how to interpret that evidence. One rejects a global Flood while accepting millions of years. The other views the evidence from a biblical perspective, recognizing the effects of the Flood as a result of God’s judgment on sin.