The explosion loosened the already unstable northern side of the volcano, and not only changed the visage of that portion of the Cascades, but deeply shook the foundation of the geological timescale.

For months, scientists cautiously awaited the certain eruption of Mount St. Helens. Instruments measured the volcano’s activities, and geologists gathered to study the volcano and its impact on the surrounding area. May 18, 1980 began as a bright morning giving no hint of what was about to occur. Just after 8:30 A.M. (PDT), an earthquake a mile beneath the volcano unleashed energy that had been confined for decades. The explosion loosened the already unstable northern side of the volcano, and not only changed the visage of that portion of the Cascades, but deeply shook the foundation of the geological timescale once believed to be “set in stone.” 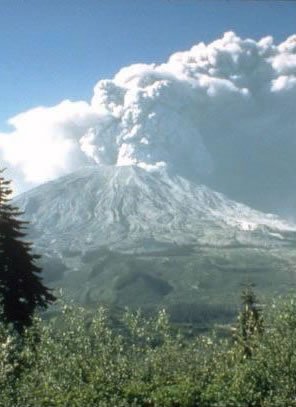 In the months before its eruption, Mount St. Helens signaled to many observing geologists that a catastrophic event was about to take place. As magma produced and filled caverns just below the surface, the mountain’s northern slope began to bulge under the pressure. It bulged from 5–50 feet (1.5–15 m) outward each day, creating a very unstable surface. Concerned geologists watched while they closed roads, prevented residents from returning to their homes and recorded and analyzed the volcano’s activities.

On the morning of May 18, 1980, an earthquake measuring 5.1 on the Richter scale shook loose the northern slope. As the northern slope slid away, the magma and gases that had been trapped under this “lid” exploded, entirely ripping away the north side of the volcano. The earthquake was just the first activity in a series of events that would change the Mount St. Helens area forever.

Shaken loose by the earthquake, the debris from the uplifted surface surged downhill as a landslide. The landslide (a combination of ice, water, air and debris) tumbled down the side of the volcano, reaching speeds over 150 mph (240 km/h). Over 1,300 feet (395 m) of Mount St. Helens’ summit and northern slope were ripped away and thrown over 230 square miles (590 km2) of the surrounding area. The North Fork of the nearby Toutle River was buried to an average depth of 150 feet (45 m) and up to 600 feet (180 m) at its highest point.

As the land slid away, molten rock at temperatures reaching 1700° F (925° C) exploded water into steam and blasted out over the northern landscape. Within seconds, this blast cloud destroyed 200 square miles (515 km2) of forests—ripping up some areas and tossing the trees about in the sediment, blowing over other trees and stripping the leaves and limbs off those furthest away from the blast. The blast cloud spread out over the land at speeds over 650 mph (1,040 km/h).

Spirit Lake, where over 680 million cubic yards (510 million m3) of debris was deposited, now reverberated with massive waves reaching up to 860 feet (260 m) on its slopes. The marks left behind on the surrounding northern slopes of Spirit Lake give testament to these enormous waves. In minutes, Spirit Lake had grown nearly twice its size in area and nearly 250 feet (75 m) in height from all of the deposited and re-deposited debris. When the once snow-covered volcano violently exploded, the heat of the blast melted the snow and ice. Sweeping downhill, the meltwater picked up sediment, rocks and trees along the way, creating mudflows. These mudflows moved at over 90 mph (145 km/h) over the land and into the river channels. 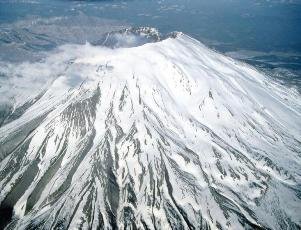 The explosion of Mount St. Helens not only drastically changed the landscape of the Washington area in just a matter of months, it also dug deep holes in the idea that “millions of years” are needed for rock layer, canyon, and fossil formation. Mount St. Helens clearly testified that these things do not require long ages to form.

Layers of sediment: Since the volcano’s explosion in 1980, up to 600 feet (183 m) of strata have formed. Many of these layers formed as debris slid down the side of the volcano and as mudflows and pyroclastic flows (containing volcanic ash, rock fragments and hot gases) covered the landscape around the volcano, adding layer upon layer to the surface.

Canyon formation: According to many geologists, most canyons on Earth were formed as a result of slow erosion by rivers and other natural sources over time—great amounts of time. Contrary to this view, Mount St. Helens tells a different story. A small eruption in 1982 carved a canyon over 150 feet (46 m) deep in a single day!

Formation of Coal: Mount St. Helens also provided some hints concerning the formation of coal. Coal forms from organic materials, and the material found on the bottom of Spirit Lake is composed and textured similarly to many coal beds in parts of the United States. This accumulated material, called peat, was deposited as a mixture of organic debris and sheets of tree bark that was stripped from the surrounding forests during and after the initial explosion. The accumulation of peat and formation of coal does not take thousands or millions of years as required by evolutionary geologists; it just takes one large catastrophe.

When Mount St. Helens erupted on May 18, 1980, the surrounding land was forever transformed. The explosion showed that rock layers, coal and canyons could all be formed rapidly, instead of slowly over periods of millions of years as is traditionally taught. The effects of the eruption of Mount St. Helens remind us of another much larger catastrophe that forever changed the face of the entire earth—the Genesis Flood (Genesis 6–9). The ensuing rapid uplift of the mountains would have caused great canyons to be formed in a very short period of time. The eruption of Mount St. Helens provides us with a glimpse of what happened during the worldwide Flood around 4,500 years ago. It shows that the ideas of “millions of years” are simply myth and provides testimony to the fact that the biblical record is accurate and the earth is only thousands of years old.