Every part of Niagara Falls testifies to a biblical timescale and a worldwide Flood as recorded in Genesis 6–9.

The grandeur and splendor of Niagara Falls entices every visitor to draw near to its edges and view its swirling, foaming waters. From the majestic Falls themselves to the walls of the Niagara Gorge, and from the buried fossils in rock layers to the steady recession of the Falls downriver, every part of Niagara Falls testifies to a biblical timescale and a worldwide Flood as recorded in Genesis 6–9. 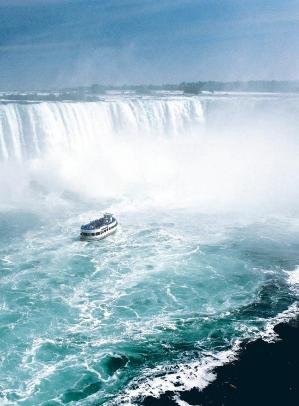 The Niagara River, flowing south to north, empties Lake Erie into Lake Ontario. Over 36 miles (58 km) long, the Niagara River reaches over 8,000 feet (2.44 km) wide at its largest point. Lake Erie stands 325 feet (99 m) higher in elevation than Lake Ontario, which causes the river to slowly decline in elevation as it moves toward the Atlantic Ocean. The river bottom steadily descends about one foot (0.3 m) every mile until it reaches the head of Cascade Rapids where the river bottom descends up to 50 feet (15 m) before reaching the crest of Niagara Falls. Flowing downhill, the water gains speed and quickly becomes foaming whitewater with a top speed of almost 25 mph (40 km/h). The Niagara River through the Cascade Rapids is divided into two separate channels by Goat Island: the American Channel and the Canadian Channel. These two channels divert the water of the river to the edges of the two main waterfalls of Niagara—Canadian Falls and American Falls.

The Canadian Falls, more commonly known as Horseshoe Falls, is the largest of the three falls with a width of over 2,200 feet (761 m) and carries more than 80% of the water over its edge. At its highest point Horseshoe Falls sends more than 650,000 gallons (2.5 million liters) of water per second over its crest to the pool 170 feet (52 m) below.

The diverted waters in the American Channel are once again divided before they reach the edge of the Falls by another island named Luna Island. The American, or Rainbow Falls, at over 850 feet (260 m) wide, carries a volume of over 100,000 gallons (378,500 liters) of water per second to its rocky landing between 70 and 110 feet (20–35 m) below.

A few thousand years ago, these three falls were actually all part of one large waterfall located 7 miles (11 km) downstream near the city of Queenston, Ontario. The topography of that area clearly supports the idea that Niagara Falls was once part of the natural surroundings of this area. So, what happened?

The two main materials that compose the river bottom are limestone and shale. The underlying shale, a much softer composite, is easily eroded by the rushing waters of the river. The harder limestone lies on top of the shale, acting as a protective layer that shields the shale from quick erosion. Over time, the constant pressure of the rushing waters and the expansion of freezing water in cracks caused the limestone to break away, leaving the softer shale exposed to the effects of the churning waters, resulting in erosion. It was this process of erosion that moved the crest of Niagara Falls upstream. 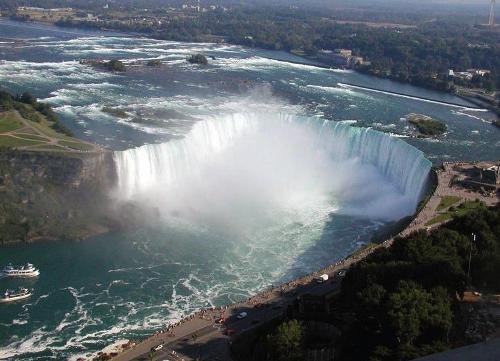 The evolutionary timetable begins almost 450 million years ago when this area lay at the bottom of a tropical salt sea. Slow deposition produced rock layers containing fossils that now make up the walls of Niagara Gorge. During the last Ice Age, close to 18,000 years ago according to evolutionists, the entire Niagara area was covered in thick sheets of ice. As these sheets melted, they carved deep river beds and lakes, including the Great Lakes, out of the land. About 12,000 years ago, the Niagara River was formed by melted ice as it moved toward the ocean near present-day Queenston. With this rapidly moving water, evolutionists say that the river then carved the Niagara Gorge and created Niagara Falls. Since the mid 1800s, the rate of erosion at Niagara Falls has been recorded at 4–5 feet (1.2–1.5 m) per year. At this rate, the time for Niagara Falls to have reached its present location would be around 7,000–9,000 years.

Around 4,500 years ago, the Flood covered the whole world while greatly changing the earth’s topography in many ways. Many marine animals were rapidly buried as a result of the Flood, and their fossils can now be seen in the walls of Niagara Gorge. As a result of the earth’s climate readjusting after the Flood upheaval, warmer oceans and volcanic dust still in the atmosphere caused the rapid development of a brief Ice Age. The entire Niagara area was covered in thick sheets of ice. As these sheets rapidly melted, the combination of ice and rock debris, and huge quantities of rapidly-flowing water carved the deep river beds and lakes, including the Great Lakes. By about 3,500 years ago, the Niagara River was formed.

The claimed 7,000–9,000 years that it has taken for the Niagara Falls to be eroded from Queenston to their present position is based on one uncertain assumption—that the presently observed rate of erosion has remained constant throughout the years. However, one factor that would speed up this rate of erosion would be the amount of water and sediment flowing down the Niagara River. From a biblical perspective, the rapid melting of the post-Flood ice sheets would have greatly increased the water flow over the edge of Niagara Falls, and with increased sediment content, the rate of erosion would have also greatly increased in the early years after the Ice Age. With these factors being considered, the age for the initial formation of the Falls moves to around 3,500 years ago, consistent with the biblical timescale for the Flood.

Viewing the evidence from a biblical worldview, we see that the evidence surrounding Niagara Falls complements and does not contradict the Word of God.

Next Chapter Petrified Forests in Yellowstone