Fossils Fail to Transition from Dinosaur Legs to Bird Wings

How did birds get their wings? This “classic major evolutionary transition” fails to take flight in the fossil record.

Evolutionists maintain that birds evolved from dinosaurs but debate just how the transition happened. They are certain it did, of course, because birds exist and, in their view, had to evolve from something. Most evolutionists have maintained that this “classic major evolutionary transition”1 began with the gradual evolution of longer forelimbs among birds’ ancestral dinosaurs. However, careful analysis of the fossil record by McGill University paleontologist Hans Larsson and graduate student Alexander Dececchi, published in the journal Evolution, reveals that there is no such transition evident in the fossil record.

“Our findings suggest that birds underwent an abrupt change in their developmental mechanisms, such that their forelimbs and hind limbs became subject to different length controls,” says Larsson.2

Larsson and Dececchi set out to determine from the fossil record when and how dinosaur forelimbs evolved into wings. Instead of finding a gradual lengthening, they found that when proportionate changes associated with different body sizes are factored out, there really is no such trend. The longer forelimbs, shorter hindlimbs, and long metatarsals (foot bones that are so long in birds they look like legs) appear abruptly in the fossil record. The skeletal characteristics of birds, in other words, start when birds start. They have no gradually transitioning antecedents in the rocks.

“This decoupling may be fundamental to the success of birds, the most diverse class of land vertebrates on Earth today. The origin of birds and powered flight is a classic major evolutionary transition,” says Dececchi. “Our findings suggest that the limb lengths of birds had to be dissociated from general body size before they could radiate so successfully. It may be that this fact is what allowed them to become more than just another lineage of maniraptorans [dinosaurs presumed ancestral to birds] and led them to expand to the wide range of limb shapes and sizes present in today's birds.” He adds, “Knowing where birds came from, and how they got to where they are now, is crucial for understanding how the modern world came to look the way it is.”

Evolutionists compare the size, shape, and proportions of body parts in order to track the really big jumps in vertebrate evolution—like fish evolving legs and walking out onto land, mammals de-evolving legs and becoming whales, and of course dinosaurs evolving wings and taking to the air as birds. “Interlimb length ratios are widely used,” the authors write, “to derive evolutionary scenarios.”3 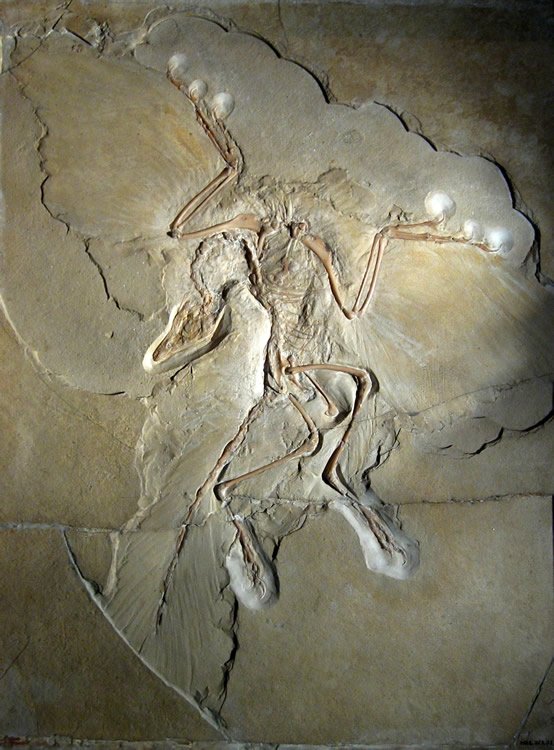 Archaeopteryx, considered an early “basal” bird and a transitional species between dinosaurs and birds, like other birds and even some genuinely feathered creatures such as the four-winged Microraptor, have proportionally longer forelimbs and shorter hindlimbs than their supposed dinosaur ancestors. The researchers found no trend among dinosaurs to account for this apparent abrupt change in body proportions. Image by Soerfm, via Wikimedia Commons.

Having “derived evolutionary scenarios,” evolutionists then must explain how these leaps happened. They also must determine what survival advantages the transitions they imagine offered. Larsson and Dececchi write, “Understanding the allometric [changing sizes] biases of limb proportions is fundamental to creating [a] testable hypothesis to determine the evolutionary drivers of the nonavian theropod to bird transition”4 (emphasis ours). For instance, modern birds certainly have proportionately longer forelimbs and shorter hindlimbs than dinosaurs. How did they get that way?

Larsson and Dececchi write that research on the origin of birds and powered flight “often focuses on the evolution of the wing with trends of forelimb elongation traced back through many nonavian maniraptoran dinosaurs.”5 But their findings do not support the usual transitional story from legs to wings. They propose that the change in body proportions from short to long forelimbs “is instead driven by a reduction in body size. Once body size is factored out,” they write, “there is no trend of increasing forelimb length until the origin of birds.”6

The dinosaurs generally thought by evolutionists to be most nearly ancestral to birds are smaller than those they place earlier on the evolutionary tree of life. Therefore, since there actually is no fossil record of a trend toward lengthening forelimbs on the evolutionary track to bird-ness, Larsson and Dececchi conclude that something about decreasing body mass must have made longer forelimbs such a great adaptation that it evolved fairly abruptly as a “focused evolutionary change.”7 Yet they note that the difference in bird body size proportion is much greater than could be attributed to size differences. They write:

Our findings do not support an evolutionary trend in increasing forelimb length throughout Coelurosauria8 to Aves. We stress that our findings do not suggest that individual lineages did not deviate from this general trend. For example, the ornithomimosaurs show significantly elongated forelimbs.9 What our findings do challenge is the notion that there is a trend of forelimb elongation within coelurosaurs beyond what is expected due to concurrent body size decrease in this lineage.10

“Avians [birds] break the theropod appendicular [limbs] scaling pattern in the forelimb and hindlimb,”11 Larsson and Dececchi explain. Not only are the forelimbs of birds in the fossil record suddenly long enough to be wings, but their rear legs are suddenly short enough to tuck under their bodies to reduce drag. “Avians also show a reduction in their hindlimbs compared to expected theropod values at that body size,” they write. Speculating about the “pre-flight” survival advantage such a dramatic evolutionary change in body proportions would offer, Larsson and Dececchi suggest that long hindlimbs “would hinder perching and movement along tree branches.”12

So if dramatically longer forelimbs were so great, and long hindlimbs were such a hindrance they had to go, how do Larsson and other evolutionists explain where the genetic information for these innovations came from? Dececchi says that the abrupt appearance of these great evolutionary innovations were crucial to bird success. Yet nothing observed in biology reveals such novel information emerging through random natural processes. Evolutionists have never provided us with a proven biological mechanism for producing new genetic information that leads to the types of changes necessary for molecules-to-man evolution.

These researchers, like other evolutionists, simply assume that whatever exists must have evolved and try to track that evolution through the unobservable past. But lining up limb ratios—even if there appeared to be a trend—would not demonstrate an evolutionary sequence. Despite Dececchi’s wish that comparative limb proportions would provide a “testable hypothesis to determine the evolutionary drivers,” it is not possible to observe and test events surrounding the presumed evolutionary origin of birds or powered flight.

Animals produce variety within the original created kinds, certainly, but they do not evolve into more complex kinds.

Unshackled by the evolutionary worldview that rejects the historical record provided by our Creator in the Bible, we accept the eyewitness account provided by God. Furthermore, the biblical account of creation is consistent with the actual observations of biology. Animals produce variety within the original created kinds, certainly, but they do not evolve into more complex kinds. And the fossil record is not a record of the evolutionary appearance of creatures over millions of years but rather is for the most part a record of catastrophic burials associated with the global Flood. Read more about these created kinds in Dr. Georgia Purdom’s book chapter “What Are “Kinds” in Genesis?” and more about how the biblical Flood explains the layers in the fossil record in “Doesn’t the Order of Fossils in the Rock Record Favor Long Ages?”

The unique design of the skeletons of flying birds, with long forelimbs fleshed out as wings and skimpy hindlimbs that minimize drag and can even tuck up under them was indeed crucial to their success on earth. God gave them that design when He created all kinds of birds (Genesis 1:20–23) on the 5th day of Creation week, about 6,000 years ago. The next day he created land animals, including dinosaurs. God completed the work of creation in just six days (Exodus 20:11), leaving no room for molecules-to-man evolution or evolutionary timescales in the Bible.

The biblical record of history is not only consistent with what we observe in the world but even explains much of what science shows us. The fact that birds appear complete and without evolutionary transitions in the fossil record is, like the rest of actual scientific observations, consistent with God’s Word, which we can confidently trust from the very first verse.